Wakijiro Yuki’s Detention Because of Kendo 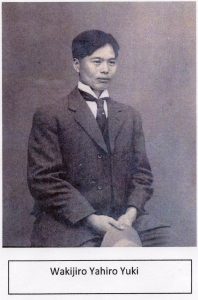 Wakijiro Yahiro was born on April 8, 1885, in Kamisaigo-mura, a little fishing and farming village in Fukuoka prefecture, on the northern coast of Kyushu, Japan. He had three brothers and two sisters, who were all farmers. After he finished school, he began working on a small civilian fishing boat, which frequented the waters by their home. One day there was an accident, and the ship sank, making him the only survivor. He was eventually rescued by the Juteopolis, a three masted American ship. For five years, he sailed around the world, visiting nearly every continent, as the ship’s cook. His granddaughter recounts one time where they got their hands on a monkey, which was presented to him as a pet.

He arrived at San Francisco on December 26, 1907, as a crew member of the Juteopolis. He wanted to settle down, however, San Francisco was still recovering from the 1906 earthquake, so he moved to

the East Bay. At this time, he made a living as a peddler or a cook, utilizing the skills he learned while sailing. He eventually married Kimino Yuki, a picture bride, and took her name, becoming Wakijiro Yuki. They had six children, Fumiko (Mary), in 1915, Helen, in 1916, Hajime (George), in 1918, Hiroshi (Frank), in 1920, Chiyoka (Margaret), in 1922, and Masato (Jim), in 1926. After marriage, they became sharecroppers, but since aliens were ineligible for citizenship, Wakijiro bought land under his children’s names. They moved with the crops, and his daughter, Margaret, wrote that since strawberries had to be changed every three years, they moved from ranch to ranch every three years or so.

Wakijiro Yuki was arrested in Los Gatos on March 28, 1942 at the age of 56, on grounds of his affiliation to kendo, a martial art whose headquarters were in Japan, and the Hokubei, a Japanese association. When the FBI arrived to arrest him, the family hid the short wave radio that they used to listen to Japanese programs under the house, and Kimino told the children to leave. She began putting clothes in a bag, but when she packed the razor, she writes, the FBI snatched it away. Once he was handcuffed, she threw a coat over his hands so the children wouldn’t see him in chains. He was first taken to the post office, then to the Santa Clara County Jail, to be held temporarily. While he was there, the family sent him clothes, and sewed cash into the waistband of his shorts, so it wouldn’t be taken by authorities.

During his trial, the authorities noted that his passport was from England (from when he sailed), but he was Japanese, which made them highly suspicious. They accused him of deserting his ship without a visa, and was therefore an illegal alien, but records have been found that prove that he went through the proper procedures before entering the United States. They also noted that he registered for military service with the Japanese Consul, and his children were sent to Japanese Language School. He also admitted that he would not like to see Japan lose the war. He was first sent to the Sharp Park detention center near Pacifica, CA, then to Fort McDowell (the detainment center on Angel Island, San Francisco), then to Lordsburg, and Santa Fe, New Mexico, and finally the family camp in Crystal City, Texas, where he was finally reunited with his wife and children in March of 1944. 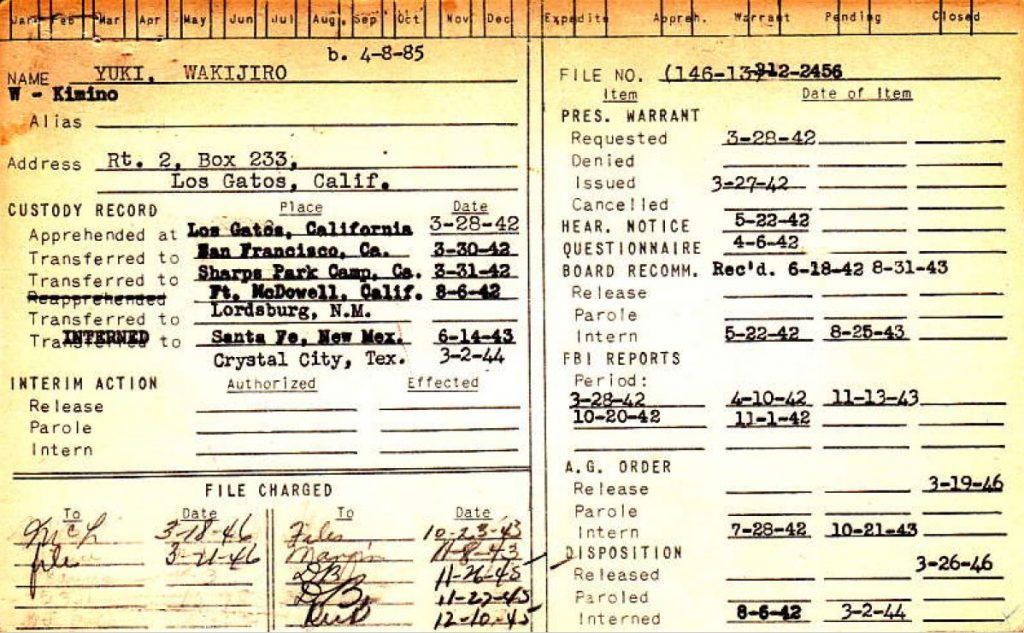 Four days before his scheduled hearing, the rest of his family was taken to the Pomona Temporary Assembly Center, before being shipped off to the Heart Mountain concentration camp. Fumiko’s family was quarantined for a time before joining them, since one child had the measles. From Heart Mountain, they wrote to the government to try to find Wakijiro. They wrote “[He] always contributed to the Red Cross, he has never left, he just wanted to be a good loyal citizen.” After much effort by the family (writing letters, affidavits, etc.), Wakijiro was finally reunited with wife, Kimino, his daughter Margaret, and his sons George, Frank, and Jim at Crystal City, Texas, two and a half years later, in 1944. However, in order to be reunited, Wakijiro was forced to consent to repatriation, in which he would be sent back to his home country, Japan, and requested that Kimino, Chiyoka (Margaret), and Masato (Jim) join him. Despite this, they were never forced to leave – they filed for non-repatriation in late 1945. They remained in Crystal City until 1946, due to the processing time, although the war ended in 1945.

After they were freed, the family went back home to San Jose. However, there was still lingering sentiment against the Japanese, making it difficult to find somewhere to stay. In San Jose Japantown, the Buddhist Church Betsuin and surrounding buildings were used as temporary shelters, until everyone could get resettled. The women stayed in the annex building, while the men slept in the Hondo (inside the temple). Eventually, Wakijiro and his wife bought a house in Japantown, on Mission Street, and went back to picking strawberries. His grandson fondly remembers having Thanksgivings at their home there. “I remember my grandfather taking me down here to Jackson Street, and getting a snow cone. And he made me bow at the temple every time we passed by. He had rock candy, he’d make it . . .  and we’d go over, and he’d cut off a piece for each of us.” Because Wakijiro had been a farmer before the war, the government reimbursed him for all the produce he lost due to his incarceration. His eldest daughter, Fumiko, became a hairdresser, and later a domestic worker. His youngest son, Jim, would go on to join the United States military and serve in the Korean war.

Since before the war, Wakijiro’s health had been going downhill. He suffered from a bad case of rheumatism, and going back to picking strawberries after the war took its toll on his body. He eventually died of a stroke on May 18, 1958, at the age of 73. He is buried in the Japanese section of Oak Hill Cemetery in San Jose.

This article was written in 2019 by Marissa Shoji, a Girl Scout from south San Jose, who is part of the San Jose Buddhist Church Betsuin Girl Scouts. She did this as part of her Gold Award project, the highest award a Girl Scout can earn. Working in conjunction with Angel Island Immigration Station Foundation, her final plan is to create an exhibit dedicated to the Japanese experience on Angel Island during World War II. She is very interested in spreading knowledge on the Japanese internment to those of the newer generations, so that their pain will never be forgotten, and instead will be built upon to create a better future.

Wakijiro Yuki’s Detention Because of Kendo