Within a year of each other, July 1939 and June 1940, two Russian choir directors arrived from China, one from Harbin in Manchuria and the other from Shanghai. Both had been invited by the clergy and church committees of two Russian Orthodox churches in San Francisco to take the post of choir conductor. They were highly esteemed in their professions and had trained in Russia before the revolution. Each received big send-offs in China from their respective churches and musical circles who knew well the talent they were losing. Waiting for them at the pier in San Francisco were welcoming parties of church members. Their imminent arrivals had been the subject of Russian newspaper articles. Their reception, however, by Angel Island immigration officials differed sharply. Valerian Stepanovich Luksha (appointed by Holy Virgin – Joy of All Who Sorrow Cathedral) who arrived on 3 July, together with his nephew and mother-in-law, was admitted right away. Ivan Andreevich Kolchin (appointed by Holy Trinity Cathedral) and his wife Olimpiada Alexandrovna, who arrived on 9 July the following year, were denied entry and spent two weeks at the immigration station waiting as their appeal made its way through the Washington, D.C. bureaucracy.

The cursory general inspection by immigration officials reviews the answers to the questions posed on the ship’s manifest; any suspicious responses results in a board of special inquiry (BSI) interrogation, where two inspectors and a stenographer pursue the matter(s) further. Question 20 asks “by whom was passage paid?” It is likely that the passage for both choir directors was paid for from church funds. Luksha, who might have been told that he would be reimbursed after his travel was completed, answered that he had paid for the ticket himself. (In an interview printed in a local Russian newspaper Novaya Zarya (New Dawn) 5 July 1939 two days after his arrival, Luksha thanked “all the individuals and organizations headed by His Grace Archbishop Tikhon [who] expended much energy, work, and funds in connection with my translocation to America.”)  Kolchin, however, acknowledged that the “Russian Eastern Orthodox Church” had paid for his and his wife’s tickets. This information probably led the immigration inspector to ask whether he was coming to take a specific job (question 29: whether coming by reason of any offer, solicitation, promise, agreement, expressed or implied, to labor in the United States?). On the manifest in this column a “no” was typed in, which had been lined over and replaced by a handwritten “yes.” Luksha’s answer to this question was also a typed “no.” Details have not survived that might explain why neither choirmaster acknowledged that they were coming to take specific positions.

The 1885 Alien Contract Labor Law prohibited foreign workers from contracting or agreeing in advance to perform labor in the United States, but there were important exemptions: “professional actors, artists, lecturers, singers, ministers of any religious denomination, professors of colleges or seminaries, persons belonging to any recognized learned profession or persons employed as strictly personal or domestic servants.” Surely Ivan Kolchin belonged to a recognized learned profession. Church choir conducting in Russia before the revolution had been regarded as religiously, culturally, and musically important. In the forty or so years before 1917, sacred music, always sung a cappella, had undergone a renaissance and a good regent (the Russian word for church choir conductor, with a hard “g”) was well trained and esteemed. It was, however, by the Alien Contract Labor Law that Ivan Kolchin was excluded. His wife was also excluded, because her ticket was also paid for by an organization, and despite the fact that immigration officials discovered that she had worked as a music teacher (piano), she was excluded as LPC (likely to become a public charge).

How could the careful work of the church committee and several Americans at the San Francisco end go so awry? Just before the Kolchins arrived, an article in Novaya Zarya had even noted on June 22, 1940: “All matters concerning documentation for the Kolchins, including the transactions with the steamship company, were carried out quite successfully and skillfully by the chief of the Russian section of the Bank of America . . . who took into account, on time, all possible impediments that could arise. . . . [When] a slowing-up of the receipt of the American visas for the Kolchin couple in Shanghai occurred, Metropolitan Theophilus [the head of the Russian church in America] and the bank representative appealed with personal letters to Secretary of Labor Miss Perkins, to Senator Johnson, to Congressman Havener, and to the head of the State Department. . . . All of them wrote that they took action and telegraphically have informed the American Consulate in Shanghai.” Even the head of the Episcopal Church in California, Bishop Edward Parsons petitioned to “expedite” the arrival of the well-known regent. 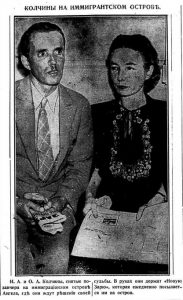 (translation) I.A. and O.A. Kolchin taken the day before yesterday at the immigration station at Angel Island where they wait for a decision on their fate. In their hands they are holding [the Russian newspaper] Novaya Zarya, which is being sent to them every day at the island.

Twice the Kolchins appeared before a board of special inquiry: three hours on Monday, the day they arrived, and three more hours on Tuesday. Immigration officials concluded that Ivan Kolchin did not fall into any of the exempted categories of the Contract Labor Law; additionally his transportation to the United States had “been paid by the money of another.” Though the BSI inspectors knew nothing of Russian Orthodox choral tradition, they might have been sympathetic to the plight of the choir director. The chairman noted “if the applicant had made any claim to belonging to one of the exempt classes, as provided for by law and regulation, his claim would merit consideration, particularly, due to the fact that he is coming to a responsible organization, the Holy Trinity Russian Eastern Orthodox Cathedral of San Francisco.” The interrogation transcript almost reads as if the BSI chairman wanted Ivan Kolchin to respond that he indeed “claimed to be a professional singer, [but] his answer was in the negative.” The BSI chairman  seemed to be relieved that “the Central Office [in Washington] will have more discretionary power than is possessed by the Board.” Though the interviews had taken place at the U.S. Customhouse in the Financial District, the Kolchins had to wait for the results of their appeal at the immigration station, separated from each other. This must have been shattering to the couple. A visitor later commented: “Nothing comparable had ever happened to them. They are beside themselves. . . .”

The church committee sprang into action, hiring local attorney Nathan Merenbach to handle the appeal, contacting Americans who had previously written letters on behalf of the Kolchins as well as the chairman of the International Exhibition on Treasure Island Marshall Dill, and arranging for a meeting with the mayor. The local Russian newspaper took the lead in organizing a campaign of support, with nearly daily progress reports to its readers. The editor sent a telegram to Secretary of Labor Frances Perkins, published in the paper, and urged readers to write as well, and not be “embarrassed by a weak knowledge of the English language.” Specific instructions about how to address the secretary were included. One of Holy Trinity Cathedral’s women parishioners took the initiative to write to First Lady Eleanor Roosevelt, and that letter, signed by 286 people, also appeared in the newspaper. Valerian Luksha, who managed to avoid the fate of the Kolchins, also sent a telegram. Hollywood also contributed to the flood of correspondence: “the mother of the famous actor Melvin Douglas, Adolphe Menzhou, Misha Auer. . . .” Several of the letters referred to Russian church singing as “a gift to American culture.” And indeed this was true. In the 1920s especially, Russian choral music was one of the sources contributing to the American “a cappella movement” that flourished here for about 25 years in the musical world.

In addition to letter writing, Novaya Zarya encouraged visits to the incarcerated couple and provided information about the ferry schedule and that passes to the Immigration Station were issued “without hindrance.” Over the course of their two-week stay on Angel Island the newspaper reported that the Kolchins “in general every day were visited by several people,” including a photographer who received permission to take the couple’s photograph, which was printed in the newspaper.

Also trying to achieve a positive outcome, New York-based Metropolitan Theophilus and two staff members “worked intensively” in Washington, D.C. Late on June 25, fifteen days after the Kolchin’s arrival, telegrams were received in San Francisco by attorney Merenbach, Holy Trinity Cathedral, and Novaya Zarya: the Commissioner of Immigration had accepted the couple’s appeal and they would be allowed entry as permanent residents. On the following day “a special delegation” from Holy Trinity headed to Angel Island to bring the greatly relieved choir director and his wife to San Francisco.

In the end the two similar cases resulted in the entry of both choir directors and their family members as quota immigrants. (Luksha’s wife and daughter arrived in November 1939.) And San Francisco’s musical culture was richer for that.  Due to the answer to one question, however, the Kolchins endured considerable grief. Was it in San Francisco or in Shanghai that someone failed to do something or overlooked a detail that led to the differing reception by the immigration inspectors? One cannot help wonder if the hearty thanks to A. Yu. Yarzykov, secretary of the American Consulate General in Harbin, expressed by Luksha in his interview with Novaya Zarya contains a clue. Perhaps Yazykov, “who provided all kinds of help in carrying out the formalities involved in his departure”  also provided some coaching. Luksha’s effusiveness is noteworthy. He continued: “one must say that Yazykov is a good friend of all Russians traveling to the USA, and many Russians who are living in the US for a long time express a true indebtedness for his advice and help. . . .”

Maria Sakovich, M.P.H. and M.A., is a public historian and independent scholar who researches, writes, and develops exhibits in the areas of immigration, family, and community history. She has written articles on Methodist women including Deaconess Katharine Maurer, a beloved social worker at the Angel Island Immigration Station, and “When the Enemy Landed at Angel Island,” from the National Archives and Records Administration’s website. Maria’s M.A. thesis is titled Angel Island Immigration Station Reconsidered: Non-Asian Encounters with the Immigration Laws, 1910-1940.