Americans know Norman Mineta as the first Asian American in a presidential cabinet, when he was secretary of commerce under President Bill Clinton, secretary of transportation under George Bush, where he took decisive action after the attacks of 9/11, and as a U.S. Congressman, councilman, and mayor of San Jose. He also received an Immigrant Heritage Award from AIISF in 2015. What they may not know is that his roots go through Angel Island, because his mother Kane (pronounced Kah-nei) was a picture bride who was questioned on the island in 1914.

During a time of rising anti-Asian sentiment in the United States, U.S. president Theodore Roosevelt and Japan reached the Gentleman’s Agreement in 1907. This informal agreement allowed Japanese American students in San Francisco to attend the same schools as other students and not be required to join Chinese and Korean students in “Oriental Schools,” but also prevented Japanese laborers from coming to the United States, with a few exceptions. Those men who were already here were allowed to send for their families. Men who were bachelors worked with their families and baishakunin (go-betweens) in Japan to arrange for marriages to young women, with the men’s photographs often serving as proxies.

These “picture brides,” usually in their late teens or early twenties, would then sail to the United States to marry men they had never met. Often, the men would be considerably older and would not always look like their photographs.

Norman Mineta’s mother, born Kane Watanabe, was one of these women. Her testimony at a meeting of a Board of Special Inquiry on Angel Island on January 20, 1914, which is on file at the National Archives and Records Administration office in San Bruno, California, reveals that she was age 20 years, 5 months when she arrived unaccompanied on the Chiyo Maru from Yokohama. She was on her way to join her husband Kunisaku Mineta in Salinas, California.

When asked when, where and how she was married, Kane reported that she was “married in Japan by photograph in April, 1912.” She presented a copy of the family register to confirm this. She also presented her medical certificate of release from the U.S. Public Health Service from January 19, 1914. Also in the file was a letter from Yasutaro Numano, acting Consul General of Japan, certifying that Kunisaku was a farmer in Salinas and “he is a man of good character, and has means to support his family.” Kane said that her father-in-law Shigetaro Mineta lived in Shimizu-mura, Sunto-gun, Shizuoka-ken.

Her husband then testified that he was age 25 years, 3 months, and a farmer in Salinas. He had a partner on his farm, Clarence Sherwood, an American citizen, and had about $1700 invested in the business personally, with $500 in the bank and a check for $500 with him. He presented articles of co-partnership between himself and Sherwood, covering 140 acres of land that he had leased (the Alien Land Law of California, passed the year before, forbade aliens from owning land. Since Asians were forbidden by the Naturalization Act of 1790 from becoming naturalized citizens, they could not own land). Kunisaku had been in the U.S. for about seven years. He stated that he had not brought his wife to the U.S. sooner because “I was not prepared to send for her.” When asked what provisions he had made to receive his wife, he stated, “I have a house for her.” The couple was asked if they were both willing to be married according to the marriage laws of the State of California, and both assented.

The chairman of the board, R.E. Peabody, stated, “It is the unanimous opinion of the Board that inasmuch as the applicant seeks admission as the wife of Kunisaku Mineta, an alien resident of the U.S., by reason of a photograph marriage which is not recognized by the laws of California, that she be admitted provided she shall be married according to the laws of California, and shall furnish satisfactory evidence of such marriage to the Commissioner of Immigration at this port; and the applicant is so informed.” 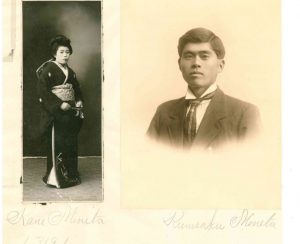 That same day, Kane and Kunisaku were issued a marriage license by the deputy county clerk of the County of San Francisco, and they were united in marriage by Zenro Hirota, president of the Japanese Interdenominational Board of Missions. Kane and Kunisaku Mineta would have five children, the youngest of whom was Norman Yoshio Mineta.

Norman Mineta further described his upbringing in an interview, indicating that his family left farming life not too long after his mother came to the U.S. The interview also describes the forces that got him involved in community service and then politics.

Well, my dad had come as a 14-year-old from Japan in 1902, and he worked for Spreckles Sugar Company down in Spreckles, near Salinas. Then in about 1910, they moved him from Spreckles in Salinas to San Martín, just south of San José, to set up a sugar beet operation there, and he did that. Then, in 1917, he was part of that influenza epidemic, maybe 1918, so he ended up in the Santa Clara county hospital for six, seven months, and as a result of that, they said that he couldn’t go back to farming, it was too strenuous, so he moved into San José, doing a number of odd jobs. One of them, one day he was interpreting in court, and these fellows came up to him and said, “How would you like to go into the insurance business?” And he said, “Well, I know nothing about insurance.” So they said, “We would train you.” So actually, in 1920, he started in the insurance business. So that was the setting of the family in the early twenties. In 1928, he built a home in San José, and then I was the youngest of five children, and I was born in 1931. So for us, life was pretty idyllic. Every summer we had our vacations, Lake Tahoe, Santa Cruz, Crater Lake, Arizona, Grand Canyon, wherever. It was a family of seven, and it was just a strong family, and we just had a great time growing up.

Mr. Mineta told AIISF: “The Alien Land Law existed in Washington, Oregon and California.  The state laws said that if you are ineligible for U.S. Citizenship then you cannot own land in this state.  My dad bought a parcel of land in San Jose in 1928.  Because he couldn’t own land, our attorney, J.B. Peckham, put the land in his name.  So in the 1920’s, the 1930’s and the 1940’s, if you looked at property rolls of Santa Clara county, San Benito County and Santa Cruz county, you would see J.B. Peckham listed as the owner of hundreds of parcels of land.  He would be listed as the owner, but what he was doing was keeping these lands for Chinese, Filipino and Japanese aliens in his name.  When the first child in these families, who was American born, turned 21, Mr. Peckham would turn the land over to that person.”

Grant Din wrote this profile when he was community resources director at AIISF.