On September 4, 1913, Josephine Tilden and her mother Elizabeth arrived in the San Francisco after a 15-month South Pacific research trip. Josephine worked in the University of Minnesota’s Botany department as a professor. Like other university-funded research trips, she expected to return with plant specimens, lichens, and seaweed to study. What she didn’t expect is that she’d also return with a young Tahitian girl named Ina Salmon.

Ina, whose name means “to illuminate, to light up,” was 13 when she crossed paths with Professor Tilden. Ina spoke both Tahitian and French, but not a word of English. Ina’s grandfather, Tati Salmon, felt it was important for her to speak the language of her great-grandfather, so he sent her with Tilden to America. When their ship arrived in the San Francisco Bay, she was taken by immigration officials to Angel Island where she was detained and questioned by the Board of Special Inquiry. 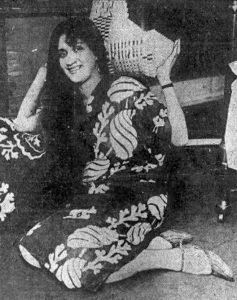 This experience is not unlike the experiences of many people arriving at America’s western gate between 1910 and 1940. However, what makes this situation different is Ina – who was born a princess on the island of Tahiti. Her arrival and detention on Angel Island made national news. Interestingly enough, she wasn’t the first of her family (or the only Polynesian princess) to arrive in San Francisco in the early 1900s. What makes her experience different was that she was held at the U.S. Immigration Station. Professor Tilden stayed by her side throughout the entire process, acting as both her sponsor and translator. After she was released, she continued to her final destination in St. Paul. 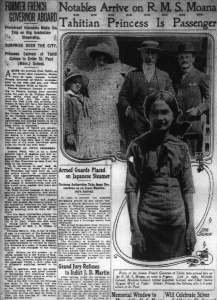 The arrangement her grandfather made with Professor Tilden had run its course after a brief two years. It wasn’t long before she left Minnesota and returned home – to the privileged life she left behind in Tahiti. As an adult, Ina visited San Francisco several more times. The public’s fascination with foreign princesses ensured she would appear in newspaper headlines with every appearance.

The young girl who was once detained at the Immigration Station, grew up to be what one artist referred to as the “Helen of Troy of Tahiti.” Despite her well documented life, it was unclear why she detained on Angel Island in the first place. Fortunately, by peeling back the layers of her story, that mystery does have an answer.

To read the entire account as researched by Russell Nauman, Operations Manager at the Angel Island Immigration Station Foundation, visit the Medium story that he wrote.