This piece honors Dung Moon Hong 鄧滿堂 and Jung Fook Yuen 張福恩. Because their grandchildren didn’t have opportunities to interview either of their grandparents, this story is primarily a compilation of information found in Dung Moon Hong and Jung Fook Yuen’s immigration records from the National Archives and Administration Records in San Bruno and some recall from family members.

Moon Hong described her home as having two bedrooms, one sitting room, and two kitchens.  One kitchen was used as a storage room. Her house was the fifth in a row of nine houses, the “third row from the east.”   The village has an ancestral hall.

Dung Moon Hong’s brother Ong Ung Sing was born 12 years after her and remained in China.

Jung Fook Yuen’s family lived and worked in a theatre at 812-814 Washington Street in San Francisco.  His father was the theatre manager and growing up, Fook 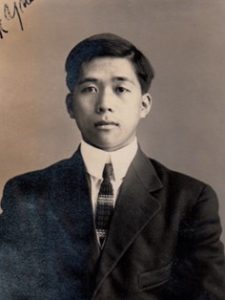 Yuen worked many tasks helping around the theatre.

His marriage to Moon Hong in November 1909 was during Fook Yuen’s third and last visit to China (with prior visits in 1899 and 1903).  Soon after the wedding ceremony, he returned to the United States on the steamer S.S. China to Oakland, California where he was employed as a cook. Two or three times a year he sent money to his stepmother in the village. In 1911 he made arrangements for Moon Hong to travel to the United States. The travel arrangements included a nearby villager, (Mr.) Jung Yim Wah and his family, all who accompanied Moon Hong on their trek to the S.S. China docked in Hong Kong.

Moon Hong described her journey from her village to the steamer docked in Hong Kong:

She met (Mr.) Jung Yim Wah and his family at Chung How Market in Sun Chung City where they boarded a boat named the Jung Leung to Bok Gai and at Bok Gai changed boats to Hong Kong.

In Hong Kong, Moon Hong boarded the S.S. China, sailed for approximately 21 days across the Pacific before landing in San Francisco, and was transferred to the Angel Island Immigration Station on September 29, 1911.  She would have been one of 347 “Asiatics” on the ship and probably slept on a hammock in steerage class.

Moon Hong was interrogated twice and detained at the Angel Island Immigration Station.  Her interrogation file included information that she was accompanied by her (and Fook Yuen’s) two-year-old son, Cheung Kee Fat.

Details from the above are from the immigration files of Dung Moon Hong, Jung Fook Yuen, and Cheung Kee Fat. 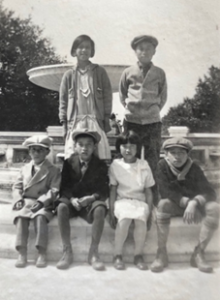 Fook Yuen was a cook in Oakland and Moon Hong was a seamstress, working at a sewing factory and sewing pieces at home.

When the children were of school age, their father Fook Yuen became ill and soon died.

Becoming a single parent, Moon Hong worked at the sewing factory while raising her six children in Oakland.  Moon Hong did what she could to subsidize the family’s income. She rented out a room in the house. Daughter Qin Sin (Rose) tells the story of a Chinese young man, a watercolorist.  She remembers seeing him in his room painting all the time.  He even painted a portrait of her.  He later became a well-known Chinese artist who eventually worked as an illustrator in the American film industry, designing the background for a number of major motion pictures.

Another family story describes Moon Hong making “moonshine.”  She was soon discovered and had to appear in court at which time she took all six children with her.  The judge, seeing her and the six little ones, dismissed her case.

In her later years, Moon Hong moved to El Cerrito, California and lived with her son, Que Wing (Dan) until her passing in the summer of 1964 at age 74.

Moon Hong’s grandchildren remember her as a loving, caring grandmother who was very proud of her family.  “Poh poh always made Chinese New Year goodies when the family gathered together,” remembers one grandchild.  Moon Hong enjoyed the times when she and her friends gathered and socialized while making joong (rice tamales or dumplings), another food item her family eagerly looked forward to.

Moon Hong’s family is forever grateful to her for her courage, making the journey, and paving the way for a better future for her future family.

(Note:  Dong Moon Hong’s Angel Island Immigration Station interpreter was (Miss) Tye Leung (Schulze). Unbeknownst to her, one of Moon Hong’s daughters lived across the street from Tye Leung (“Mrs. Schulze” as the neighbors called her) in her retirement years.  During Moon Hong’s visits to her daughter’s home, Moon Hong enjoyed looking out the window and may have seen Tye sitting on the front stoop.  It would have been serendipitous if Moon Hong and Tye Leung had met 50 years after their encounter at Angel Island Immigration Station. Too bad it didn’t happen.)

Author: Granddaughter Claudia C. Jeung, with support from the other Jung grandchildren – Rod, Marc, Cindy, and Jeff.  Claudia is a retired San Francisco school principal who has been a community volunteer with the Square and Circle Club for over 50 years. 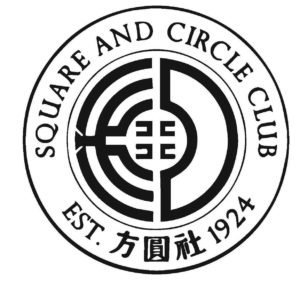 This “Immigrant Voices” story is from a Square and Circle Club service project that aims to share stories of its members’ families with the community. Square and Circle Club was founded in 1924 in San Francisco Chinatown by seven young women to aid flood and famine victims in China. Since that compassionate beginning and to this day, the Club has continued its tradition of supporting and caring for the needs of the community. It is the oldest Chinese/Asian American women’s service organization in the nation.  (squareandcircleclub.org)