Moi Chung, my paternal grandfather, hailed from Hoyping of the Sze Yup region of Guangdong, China. As a sojourner to Gold Mountain, he owned two Chop Suey houses, the Royal Restaurant, and Imperial Restaurant, from 1917 to 1936. Chop Suey was a popular Americanized Cantonese cuisine in Chinatowns and downtowns across America.

During the Chinese Exclusion Act, job opportunities for Chinese as sojourners in America were limited. Chop Suey houses, as well as hand laundries and dry goods stores, was their basic means to earn a living. Chop Suey was a key aspect of the Chinese experience in America. It reached its zenith between 1896 and 1965 as cuisine for Americans. Moi Chung followed that business pattern.

Hoy Lun Chung was his father and Shee Lee was his mother. In about 1892, Hoy Lun Chung went to Gum Saan.  He operated a gambling hall and opium den in Boston Chinatown. In 1926, he returned to Yung Lew Gong, a very wealthy man. He built a house there and owned a market in Toishan.

Hoy Lun Chung wanted Moi Chung to carry on his success in America. He had business investments in San Francisco, Cambridge, and Springfield. Moi Chung married Shee Leung, wife #1, who is said to have died early in their marriage. Together, they had a daughter, Suey Fong Chong, born in 1912. They also had an adopted son, Bow Fui Chong. 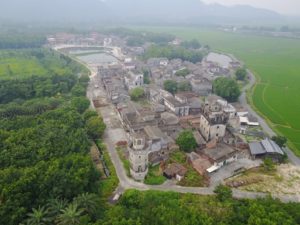 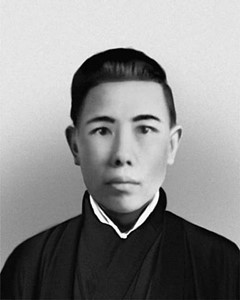 Moi Chung  as a student

Moi Chung immigrated from Hong Kong to Gum Saan. He arrived at the Port of San Francisco in California on June 17, 1912 aboard the S.S. Mongolia steamer. She carried 1,818 passengers, grossed 13,639 tons, with a speed of 16 knots. Moi was briefly interviewed at the Angel Island Immigration Station. Moi Chung attended Ng Lee Mission School under the sponsorship of Miss Ida Greenlee. He worked at the Chong Sing Company at 658 Grant Avenue in San Francisco Chinatown. Chong Sing Company was a seller of Chinese dry goods and food products at the three-story brick façade building, next to Canton Bazaar. Moi Chung would later become a silent partner with the Company with his father. 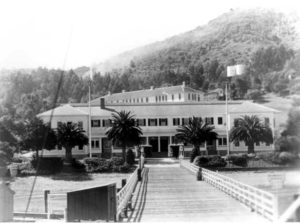 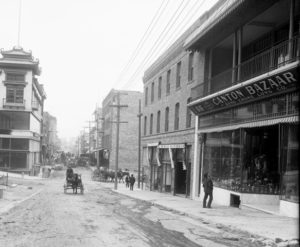 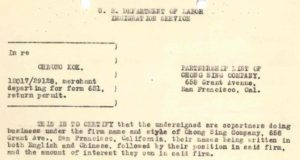 Moi Chung moved to New England to work as restaurant manager at his father’s Imperial Restaurant in Cambridge from 1917 to 1919. It was near Boston Chinatown, the center of the Chinese community in New England. Moi Chung lived and worked among a bachelor community of few women and few children. They were a fraternity of brothers who left their wives in China.

Because of the severe restrictions on female immigrants and the pattern of young men migrating alone, there emerged a largely bachelor society in Chinatown. The family of Moi Chung was forced apart, separated from Cun Chuen Wong, my grandmother, from 1923 to 1966 – 43 years. This was bitter agony for the “bachelors” in Chinatown while pursuing their lofty dreams on Gold Mountain. Letters were their only means of communication across the Pacific Ocean. 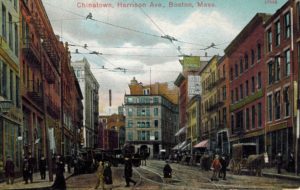 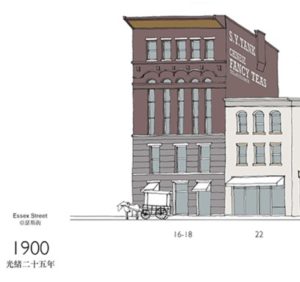 Many Chinese businesses were capitalized by investors, whether in active (management) or passive (silent) roles. Federal immigration inspectors viewed management of a business as qualification for merchant class under Chinese Exclusion Act. It allowed merchants to legally return to America after their visit to their hometowns in China. If a sojourner was deemed a laborer class, he was not allowed to return.

Moi Chung returned to China as a merchant for the Royal Restaurant. He departed on June 16, 1921, from the Port of Vancouver, aboard R.M.S. Empress of Asia. He returned to Yung Lew Gong Village, where he married Cun Chuen Wong, wife #2, from Toishan, on December 1, 1921. Gim Suey Chong, my father, was born on December 26,  1922.

The Imperial Restaurant was a high-class fancy restaurant with white cloth tablecloths served by waiters on the second floor of the Holmes Block, a three-story brick block with mansard roof. It was known for Chinese and American dishes, especially Chop Suey. The restaurant served turkey for lunch on Sundays. There were three dining halls, kitchen, and a storeroom and had the capacity to seat 170 people. One white employee was porter and there was a time when they had three white waitresses. 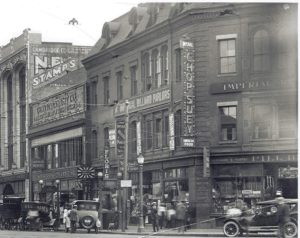 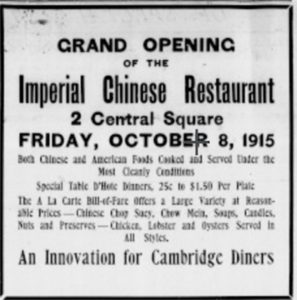 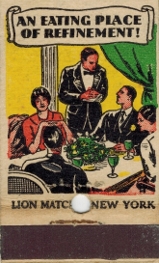 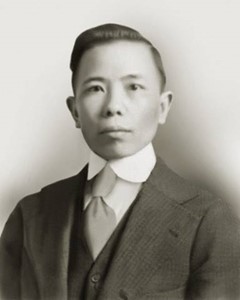 Moi Chung as a merchant

By 1932, his son, Gim Suey Chong, was 9 years old. Moi Chung decided it was time to bring him over.  He was given false papers to bring him to America, where he would have better opportunities for a good education and a higher income.  Gim Suey Chong memorized the biographical information associated with his paper identity and successfully gained entry, on April 25, 1932, at Port of Boston.

However, father and son struggled to make ends meet, even though they lived in quarters above the restaurant to save money.  Like many businesses, the Imperial Restaurant did not do well during the Great Depression. The economy was in shambles. Jobs were scarce across the country. Moi Chung decided to sell his share in 1936 and move to Los Angeles.

In summer 1936, Moi Chung and Gim Suey Chong left New England for a new life in California – The Golden State. With their meager possessions, they departed from the South Station of Boston to travel by train to Union Station in Chicago. They finally arrived at the old Central Station (Southern Pacific/Union Pacific Railroad ) near City Hall in Downtown Los Angeles. 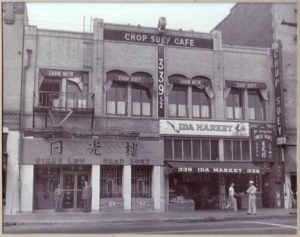 The bustling Little Tokyo was the biggest enclave of Japanese in America. From 1936 to 1943,  Moi Chung worked as a waiter at café of Yet Quong Low (“Sun Light Building”) Chop Suey Café . It was also known as Nikko Low Chinese Restaurant among the Issei and Nisei community. The Café specialized in the Japanese version of Chop Suey – “China-Meshi.” Hoie Wing Jung was owner, who also was from Yung Lew Gong. Other Chop Suey restaurants in Little Tokyo included the famous Far East Café, Sam Kow Low Chop Suey Cafe, and Lem’s Café. They slept in the storage room.

Yet Quong Low had a banquet room for up to 200 people. A dining room of six tables was in front. They served chow mein, beer, and wine. Japanese farmers were regular customers after they delivered fruits and vegetables to the Produce Market. They enjoyed drinks and entrees at the Chop Suey cafes on Saturdays. The adjacent Far East Café was a rival.

Moi Chung associated with his fellow clansmen from Hoyping at the Wai Sing Meat Company. They shared their hopes and dreams. They missed their wives and children in China. They wrote letters back home, talk gossip, and play games. His best friend was Dong Foo Jung, a watchmaker, at Paul’s Jewelry on Broadway in Chinatown.

Moi Chung drifted into casual jobs as a waiter, bartender, and cook at various restaurants in Los Angeles and San Francisco. After retirement, he received a meager Social Security check. His lonesome misery and agony led to his chronic alcoholism, that was worsened by the long separation from Cun Chuen Wong, his wife, due to the Chinese Exclusion Act. 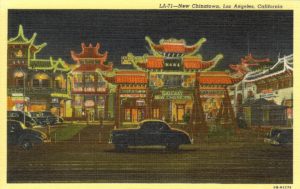 In Los Angeles, Moi Chung was naturalized as an American citizen, with a Certificate of Naturalization, on September 21, 1953. 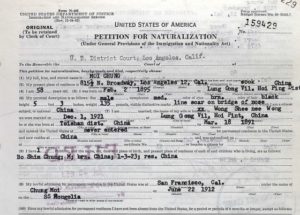 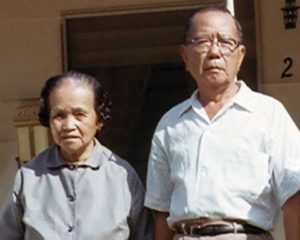 With the help of California Representative George Edward Brown, Jr., via an IR-1 spousal visa, Moi Chung reunited with Cun Chuen Wong, on February 14, 1966, at Los Angeles International Airport after a long separation of 34 years. For ten years, they quietly lived together at a bungalow in Elysian Valley.

The health of Moi Chung and Cun Chuen Wong gradually declined. With deep angst, Gim Suey Chong, their son, reluctantly placed them at a nursing home in Los Angeles. Moi Chung died on August 3, 1976, and Cun Chuen Wong died on October 24, 1977, at the French Hospital with Dr. Julius Sue in attendance. Gim Suey Chong sadly buried them, among other sojourners, at the Chinese Cemetery in East Los Angeles.

Raymond Douglas Chong is president of Generations, LLC, his creative enterprise in Sugar Land, Texas, The Lone Star State. He is a writer of stories, composer of poems, maker of films and lyricist of songs. He has cheerfully shared stories in program presentations, television interviews, and documentary films. You can also check out Raymond’s website, Chinese Love Poetry, http://www.chineselovepoetry.com/poetry.html, to learn more about his works. Raymond is a sixth generation American Born Chinese (ABC) from California. He proudly traces his Chong ancestry to the ancient Yung Lew Gong (Long Gang Li) – Village of Dragon Hill at Hoyping (Kaiping). The ancient village was founded in the year 1506 – located in the Pearl River Delta in Guangdong Province, China. For more of his family history, please read The Zhang Clan Odyssey, https://www.mychinaroots.com/samples/zhang-odyssey/  In addition to his creative pursuits, Raymond has a bachelor’s degree in Civil Engineering from the University of Southern California and a master’s degree in Civil Engineering from San Jose State University. He has worked for various agencies  and consultancies in California, Texas, Oregon, and Saskatchewan.