Hikoshichi Higuchi was born on December 13, 1880, in Fukuoka Prefecture, Japan. He immigrated to Hawaii on July 1, 1904, just before the Russo-Japanese War would commence, soon followed by his brother, Harunosuke, who lived in Santa Clara. After briefly staying in Hawaii, he eventually traveled to Monterey, California. There, he worked as a fisherman and gardener. Soon, he married Haruyo Ichigi, an Elementary School teacher. Together, they had four children: Yoshi, born in 1914, Sachi, born in 1916, George, born in 1918, and Takashi, born in 1921. He was also an instrumental member in establishing the Monterey Buddhist Church in the 1930s. 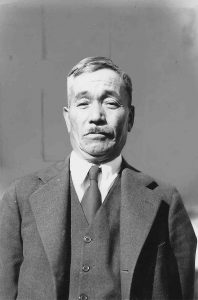 Immediately following the December 7th attack on Pearl Harbor, Hikoshichi was interrogated by the FBI; however, he wasn’t arrested. He and Haruyo were able to scrape together a living gardening and as a housekeeper, but their status as Japanese meant that they faced many financial challenges. In 1942, in order to escape Order 9066, the order to send all Japanese on the coasts to internment camps, he took Haruyo and their youngest son, Takashi, to San Jose, since it was still considered a “Free Zone”. At the time, their oldest daughter, Yoshi, was living with her husband, and helped them find a house to rent, which they shared with another family from Monterey. They had to sell everything in their previous five-room house in Monterey, including furnishings, gardening tools, and other equipment, which all sold for a total of $35.

In 1942, Hikoshichi was once again interrogated by the FBI, and this time was arrested and taken to the alien detention center, Sharp Park Detention Station, near Pacifica, California. It was opened on March 30, 1942, and served as a temporary holding facility for detainees who were later sent to other, permanent, camps. In May of that same year, Haruyo and Takashi were sent to the Santa Anita Assembly Center. Hikoshichi was later temporarily sent to Fort McDowell on Angel Island, another holding center, before arriving at the Lordsburg detention facility in Lordsburg, New Mexico, on August 30, 1942. He stayed there until March 1944, and was then transferred to Heart Mountain, passing through Santa Fe, New Mexico.

Hikoshichi arrived at Heart Mountain on March 27, 1944. He was reunited with his son, Takashi, and wife, Haruyo, who had been transferred there on September 17, 1942. His oldest daughter, Yoshi, was also there, with her husband, daughter, mother-in-law, and father-in-law. His youngest daughter, Sachi, was in Poston, Arizona, with her husband. His oldest son, George, was originally held at Minidoka, but then transferred to Heart Mountain on February 4, 1943.

Yoshi eventually left Heart Mountain on October 9, 1944, George on May 26, 1943, and Takashi on May 7, 1943. Hikoshichi left Heart Mountain with his wife on October 16, 1945, and returned to California. After the war, they lived in Monterey and San Jose, but had serious health problems in the 1940s. Yoshi, Sachi, and Takashi and their families returned to San Jose or Monterey at different times after the end of the war. George went to Wisconsin and lived in the Great Lakes area as well as Arizona. Hikoshichi died in San Jose in 1956 and is buried in the City of Monterey Cemetery together with his wife.

This article was written in 2019 by Marissa Shoji, a Girl Scout from south San Jose, who is part of the San Jose Buddhist Church Betsuin Girl Scouts. She did this as part of her Gold Award project, the highest award a Girl Scout can earn. Working in conjunction with Angel Island Immigration Station Foundation, her final plan is to create an exhibit dedicated to the Japanese experience on Angel Island during World War II. She is very interested in spreading knowledge on the Japanese internment to those of the newer generations, so that their pain will never be forgotten, and instead will be built upon to create a better future.