Every Light Has Its Shadow: The Tales of Two Families

Filed under: Discrimination, Return to US

What might a butcher from the United States and a merchant from Australia have in common? In the early 1900s, Chow Kum Sang—the manager of the Stockton Meat Market, and Kong Chow Chun—a merchant from Melbourne, were stopped from entering the United States due to the stringent enforcement of the Chinese exclusion laws. Fortunately, they were both eventually able to settle in the United States with their families, but the issues they experienced in the process — both legally and emotionally — demonstrate the terrifying effects that racist immigration policies can have. 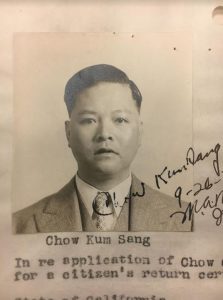 first came to the United States at the age of 16 with the dream of establishing his own business. On December 12, 1916, he was admitted into the country via Angel Island and became a lawfully domiciled resident of the United States. In order to save up capital needed to start a business, Chow started working at a Chinese herbal store called Chun Wo Tong Company that one of his friends managed. While working, he met a beautiful native San Franciscan woman—Chan Kum Yung, and they began dating. Soon, on March 25, 1920, they were married according to Chinese custom, and not long after, they had two sons who were U.S. citizens by birthright, Raymond and Bobby, and one daughter, Belle. 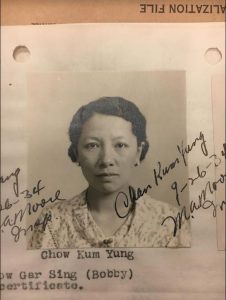 In 1932, Chow finally gathered enough funds to establish his own business and soon became the manager of the Stockton Meat Market: he had finally achieved one of his lifetime goals. At this time, all three children were attending local schools, the family had a stable source of income, and everyone was happily—and legally—living together in the United States. It seemed as if the family had achieved the elusive American Dream.

Yet, even this family—a family where almost every person was a legal U.S. citizen, faced difficulties with reentry.

A few years after establishing the Stockton Meat Market, the family left to visit China. Chow wanted to visit people he had left in order to come to America, and everyone else in the family hoped to see the country that he was born in. But when they tried returning home in 1937, they faced many legal challenges. Despite having worked and lived in the United States for more than two decades, Chow and his family needed to obtain a return permit, among other documents. Officials questioned whether the family’s connection with the Chinese market that Chow worked at was adequate proof that he was a domiciled merchant, whether Chow and Chan were actually married since they were not legally married under U.S. law, and why the family decided to visit China in the first place. They were almost turned away, a fate that meant they would have had to leave everything behind: their cherished friends, their established business, and the livelihood they worked so hard to achieve. Raymond had it especially tough. For some reason,  the San Francisco District Director suspected that Raymond was not a real American citizen.

Fortunately, everyone was finally able to reenter the United States after a brief delay, but never in their wildest dreams could they have imagined that U.S. citizens would be so  shunned by the country they had been living in for so many years.

When Kong came to the United States in 1926, he came with his wife and his four children. His wife, Ivy Kong Chow Chun, was born in China but was also a national of Great Britain. They had three sons—Gin Foo Chun, Jip Foo Chun, and Wei Foo Chun, and one daughter—Ai Foy Chun. They were quite the diverse family too: Gin and Ai were both born in Melbourne, Jip was born in Hong Kong, and Wei was born in San Boy Village in Guangdong Province.

Yet despite Kong’s pure and honest intentions, he had to jump through  numerous legal hoops before he could actually enter the United States. He had to convince officials that he was employable and that he could be trusted. This proved to be quite difficult because he had a club foot, despite the fact that the club foot was imperceptible and he had been working the previous seventeen years. To prove that he was a trustworthy merchant, Kong had to provide a total of three letters of recommendations—one of which was written by a white U.S. citizen, and a precis of a successful investigation of his status. Only then were the officials convinced that he was a “reputable, honest, straightforward business man.” Kong and his family were eventually able to settle in the United States and soon moved to New York so that Kong could finally establish the branch of his family’s business that he had originally set out to do.

But even then they were not completely without worries. In the 1940s, Gin Foo Chun received a warrant of arrest and was about to be deported for reasons not stated in his immigration file. Gin explained that he entered as the son of a merchant and had been living in the United States almost his entire life. But INS did not believe him, and the investigation dragged on for more than a decade, during which time Gin’s immigration status was in limbo.  It was not until 1952 that the investigation finally stopped. The warrant of arrest was canceled, deportation was suspended, and a record of lawful entry for permanent residence was finally created for Gin.

Although both families eventually successfully entered and lived in the United States, their struggles with reentry, facing possible deportation, and almost losing everything they had worked for—proves how stringent the Chinese exclusion laws were being enforced in the early 1900s. Even U.S. citizens—as long as they looked “alien”—were subject to close scrutiny. Yet even though these families’ stories occurred almost a century ago, many similar stories and sentiments have been echoed since the Trump administration passed Islamophobic policies such as the Muslim travel ban. We can only hope that one day the United States can truly be a beacon of light for all immigrants, regardless of their racial or religious background.

James Sun ‘21 is majoring in Global Affairs and Statistics & Data Science at Yale, where, he has worked at the Yale Office of Sustainability, using data analysis to formalize sustainability action plans for the residential colleges. James has also been involved in political and international affairs while interning at the City of Detroit Mayor’s Office, tutoring for Bridges ESL, and managing the finances of the Yale Taiwanese-American Society. He is also a board member of the Chocolate and Confectionery Artisans Organization at Yale and loves food very dearly. James is interested in food systems, Smart Cities, environmental sustainability, national and international politics, and environmental justice.  James wrote this story as an “extern” at AIISF in the spring of 2018.

Special thanks to Judy Yung for editing assistance.

Every Light Has Its Shadow: The Tales of Two Families