On June 14, 1917, Leo Posner and Elena Brutzkus were married in Moscow. Shortly thereafter they went on their honeymoon. They took the Trans-Siberian Railroad from Moscow to Vladivostok, then they took a ship, such as the Iki Maru, one of Japan’s international ferries, across the Sea of Japan to Yokohama, Japan. 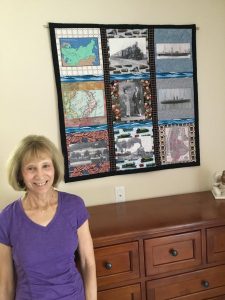 Because of the Bolshevik Revolution, Leo and Elena were never able to return to Russia. They lived in Yokohama for five years. On April 1, 1922, they and their 2 1/2 year old son, David, boarded a Chinese steamship, the S.S. Nanking, bound for San Francisco. Seventeen days later, on April 17, they landed at the Angel Island Immigration Station in San Francisco Bay. Soon after, they boarded a train to the East Coast. They settled in Brooklyn, New York, to be near Elena’s brother, Sergius Brutzkus, who sponsored them so that they could become Americans.

The quilt shown here was lovingly made by Laurie (Posner) Mutalipassi, the granddaughter of Leo and Elena, to document their journey for future generations, and completed in July, 2016. Note Angel Island in the lower left.

Laurie Mutalipassi is a quilter who lives in Westminster, California. 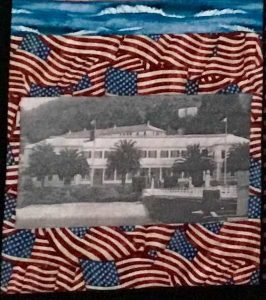