by Annika Miller and Thomas Keegan

This story was shared by Flo Oy Wong with the assistance of Nellie Wong and William Gee Wong, children of Gee Seow Hong and Gee Suey Ting.

From Sojourning Teen to Overseas Father

The history of Gee Seow Hong’s family is complex and rich with personal sacrifice, risks, and triumph. Coming from Taishan (also known as Toisan and Hoisan), Guangdong province in southern China, Gee Seow Hong (1896-1961) was sent as a teenager in 1912 to the United States to make money for his family. In order to gain entry to the country, Gee came under a paper name, claiming to be the son of a native-born Chinese merchant. After making it through the interrogation process on Angel Island, he settled in Oakland, California’s Chinatown where he worked in an herbalist store run by a man who was part of the same family clan. In 1919, Gee returned to China to marry a woman arranged for him by his mother. This marriage led to the birth of Gee’s first daughter, Gee Li Hong (1922-2014), but Gee’s wife passed away soon after her birth. Gee then returned to Oakland to continue working, but traveled back to China again when his mother found a second wife for him, Gee Suey Ting (1903-1973). His second marriage soon led to the birth of his second daughter Gee Li Keng (1926-2018). Leaving his two daughters with Suey Ting, Gee Seow Hong returned to the United States again to continue working without his family. On another trip back to China, he fathered another daughter, Gee Lai Wah (aka Gee Li Wah, 1931-2021), which was his third child and second with Gee Suey Ting. During the time that he was abroad, Gee was able to send money home to his family regularly, allowing his eldest daughters, Li Hong and Li Keng, to attend school, which was atypical for the cultural milieu in China at the time. However, instability within China and limited prospects for a stable life there convinced Gee to try to uproot his family and establish a new home in America. In 1933, he decided to make one final trip to China and back, bringing his wife and three daughters to live with him permanently.

Even though the Gee family was able to afford the journey, significant challenges remained. Most conspicuously, the 1882 Chinese Exclusion Act in the United States was in force. In short, the Act  banned Chinese laborers from entering the United States for two principal reasons: institutional racism and white workers’ desire to eliminate lower-paid competitors. The Act prevented Chinese people from obtaining citizenship and denied them fundamental rights that were afforded to other groups.

Once they landed in San Francisco, Gee Seow Hong headed for Oakland, but Gee Suey Ting and the three girls had to be detained at the Angel Island Immigration Station to win approval for legal entry into the United States.. For Gee Suey Ting, the Chinese Exclusion Act presented an immediate obstacle: wives were not allowed to enter the country with their husbands. To circumvent this, Suey Ting took the name of her husband’s “paper sister,” Gee Theo Quee, who was listed as the seventh child of their mutual “paper father.” The reason this arrangement worked for Seow Hong and Suey Ting was that the paper father to whom they both claimed a relationship had originally been recognized as American-born. Thus, Suey Ting donned the identity of Gee Seow Hong’s paper sister and they, both “children of a native-born man,” were eligible for entry to the United States. 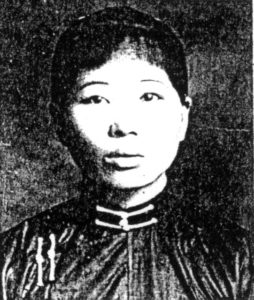 To prepare his family for the journey to America in 1933, Gee Seow Hong had purchased coaching papers for his wife so that she and their daughters could get ready for questioning about their identities upon arrival in the United States. These papers guided them through the types of questions that would be asked and helped ensure their answers would match when questioned separately. After leaving China’s border, they voyaged for three weeks across the ocean. For Gee Suey Ting and the three girls, their entrance to the country had just begun. The largest physical obstacle, the ocean, had been traversed, but there was another, more emotional and stressful obstacle to come at Angel Island’s Immigration Station. Although their six-day stay on the island was relatively short, it was no less difficult to endure. In addition to the confining quarters, poor food quality, limited freedom of movement, and medical exams that Angel Island has become known for, the mother and her children underwent separate interrogations, wherein they were questioned about their identities and reasons for travel. 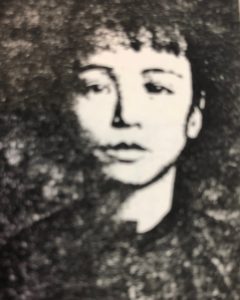 Some of the questions used in the interrogations were absurd in the sense that they were not questions anyone would remember perfectly or easily. This was an intentional tactic that immigration officers used on the island to obtain mismatched answers, which would result in justifiable suspicion and possibly denial of entry. The prospect of being discovered as using a paper identity was frightening and the daughters required considerable coaching. As part of this, Gee Suey Ting had to instruct her three girls to call her “auntie” rather than “mama.” Luckily, the coaching papers given to her and her daughters allowed them to learn their “paper” identities well enough to pass their interrogation sessions. 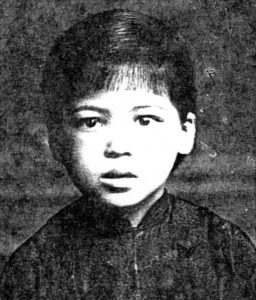 Gee Lai Wah, youngest daughter and only two years old at the time, is said to have helped her family’s cause on Angel Island. While being interrogated, she was asked what her name was, and in response she replied, “if you don’t tell me your name, I am not telling you mine.” After this specific interaction, the officer had a good impression of the child, given her clever but sassy response. Shortly after the interrogations, the Gee family was released from Angel Island, allowing them to cross San Francisco Bay to start their new life in Oakland, California. 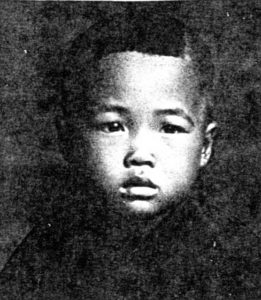 Despite being allowed on American soil, Gee Seow Hong and Gee Suey Ting still held on to fears related to Suey Ting’s paper identity. They knew that the immigration services had her paper identity on file and felt compelled to project that identity publicly. This led to the family living separately for a short time, which is one of the ways the family needed to internalize and perpetuate the falsehoods that were necessary for surviving the immigration process. Additionally, since Gee Suey Ting was a “sister” to Gee Seow Hong on paper and became pregnant shortly after her arrival in Oakland, there was an urgent need for the Gee family to find a legal husband for her. Otherwise, the family would have been suspected of lying about their identities upon entry. Eventually, Gee Suey Ting married a man with the surname Wong, which resulted in the Gees’ subsequent children taking the name Wong as their own last name. This “marriage” was in name only and was never consummated, as Suey Ting was still the actual wife to Seow Hong. To this day, William Gee Wong, the seventh child of Gee Seow Hong and sixth of Gee Suey Ting, and the only son of the family, uses the last names of both his actual and paper fathers as a testament to the family’s history. Nellie Wong (b. 1934) was the first American-born child in the Gee/Wong family, and she was followed shortly by Leslie Wong (1936-1985), Flo Oy Wong (b. 1938), and finally William Gee Wong (b. 1941).

Although Nellie, Leslie, Flo, and their brother William did not go through detainment at Angel Island themselves, the influence of their immigrant parents and sisters persists, as well as that of their sacrifices, and the family’s story has ultimately become one of triumph. Nellie Wong is a highly accomplished poet and activist, known for her documentary film Mitsuye & Nellie, Asian American Poets (1981) and her poetry in titles such as The Death of Long Steam Lady (1986), Stolen Moments (1997), and Breakfast Lunch Dinner: Poems (2012). Nellie was also one of the delegates in the First US Women Writers Tour to China (1983), which was sponsored by the US-China People’s Friendship Association. Flo Oy Wong is a recognized poet, artist, and educator, and is known for her art installation exhibition titled made in usa: Angel Island Shhh, which was featured on-site at Angel Island in 2000 and Ellis Island in 2004, as well as her book of poetry Dreaming of Glistening Pomelos (2018), which was released in celebration of Flo’s eightieth birthday. William Gee Wong is the author of the books Yellow Journalist: Dispatches from Asian America (2001), Images of America: Oakland’s Chinatown (2004), and the forthcoming memoir about his father and himself, titled Son of a Native Son: A Memoir Rooted in China, Chinatown, and America. William also co-authored the book Images of America: Angel Island (2007). Li Keng (Gee) Wong, one of their siblings that did go through Angel Island, also published a full-length, first hand account of her family’s immigration experience called Good Fortune: My Journey to Gold Mountain (2006). The use of creative expression as a vehicle for preserving history runs through the family and highlights their shared willingness to engage with the historical experiences today, bringing awareness to segments of history that often fall outside of the dominant narratives.

Two poems are provided below, written by Flo Oy Wong and Nellie Wong, respectively. Flo’s poem, titled In Search Of, was shared with the authors of this story after being interviewed about her family’s immigration experience, and Nellie’s poem, titled How A Girl Got Her Chinese Name, first published in her book Dreams in Harrison Railroad Park (1977), describes how she got her Chinese name while living within two different cultures.

In Search Of  by Flo Oy Wong

The concrete gray of Harrison Street,

So different from Baba’s paths of childhood,

Seeded under the banyan tree,

Where ancestors gathered long ago.

Where ancestral breasts and torsos

Were seared by blistering sun,

Where flimsy rice stalks were grazed

Is a symbol of oppression,

Where his parents’ toil once folded

His son who will swallow the moon,

Daughters who will knit links to earth

Across a powerful ocean,

Where their footprints will mark

How A Girl Got Her Chinese Name by Nellie Wong

On the first day of school the teacher asked me:

What do your parents call you at home?

The teacher stressed the I’s, whinnying like a horse.

No such name in Chinese for a name like Nellie.

We shall call you Nah Lei

which means Where or Which Place.

The teacher brushed my new name,

the ink over and over.

After school I ran home.

Papa, Mama, the teacher says my name is Nah Lei.

I did not look my parents in the eye.

Nah Lei? Where? Which Place?

No, that will not do, my parents answered.

We shall give you a Chinese name.

we shall call you Lai Oy.

So back to school I ran.

announcing to my teacher and friends

that my name was no longer Nah Lei.

not Where, not Which Place,

my own Chinese name.

I giggled as I thought;

depending on the heart

But now in Chinese school

I was Lai Oy, to pull out of my pocket

every day, after American school,

from Nellie, from Where, from Which Place

to Lai Oy, to Beautiful Love.

I never knew I would ever get lost.

Below is a piece of commemorative art by Flo Oy Wong that utilizes and comments on themes related to the Angel Island immigration experience. It was created to honor the experiences of her mother and elder sisters at the immigration station: 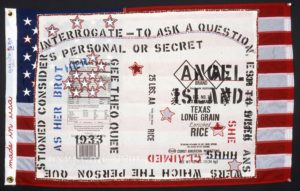 This story was written by Annika Miller and Thomas Keegan who were members of the 2022 Knox College summer program “Roots on Angel Island: Immersion and Research on Early Chinese Immigration” led by Professor Weihong Du. The project aimed at giving undergraduate students an immersive and comprehensive learning experience focused on early Chinese immigration to the United States of America. As part of the learning experience, Knox students were tasked with interviewing descendants of early Chinese immigrants and writing their stories down to be shared and remembered.