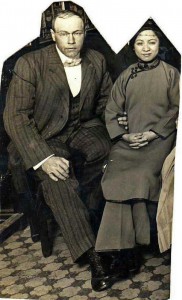 I stand in the graveyard of a lonely, windswept Nevada ghost town. Miles of empty deserts, snowy mountains, fields of ripe produce, and a hundred little towns lie between me and San Francisco. Yet, there is an eternal, immutable bond of family that crosses these miles, and ties desolate Ruby Hill, Nevada to the immigration station at Angel Island in the middle of San Francisco Bay.

My paternal grandmother, Tye Leung, was born in San Francisco’s Chinatown in 1887. When she was just 12 years old, she ran away to the Presbyterian Mission Home in Chinatown rather than be sent to Montana to enter into an arranged marriage. At the mission home, under the tutelage of Donaldina Cameron, Tye learned English and became a Christian woman. She started interpreting for Miss Cameron and assisting on many police raids of Chinatown brothels to rescue young women from prostitution.

It was because of her dedicated compassion and English language skills that Tye was recommended for a federal civil service position at the new immigration station at Angel Island in 1911. She was the very first Chinese-American woman to become a U.S. civil servant when she accepted the position of interpreter and assistant matron.

It was at Angel Island that she met Charles Schulze, an Immigration Service inspector. Around 1912, they fell in love and wanted to marry. Due to California’s anti-miscegenation laws, they had to travel to the state of Washington to get married. Bowing to deep-seated prejudice against interracial marriage, they both resigned from the Immigration Service a year later.

Who was this Charles Schulze? Why did he buck conventional practice, fall in love with, and even dare to marry a Chinese woman? Maybe it all stemmed from his immigrant father, Carl Schulze. Like many others in Europe at that time, Carl sought a new life in America. He emigrated from Prussia in the 1860s, ending up in Illinois. After becoming a naturalized U.S. citizen in 1864, he made his way to Santa Cruz, California with his new wife, Irene. 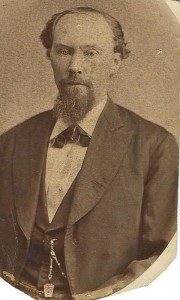 In the 1870s, gold and silver mining was still producing millions of dollars in the state of Nevada, so Carl, now Anglicizing his name to Charles, set off to make his fortune. He had to leave Irene and his new infant back in Santa Cruz, due to the rough life in the mining towns. Charles eventually found gainful employment as the appointed U.S. postmaster for the booming town of Ruby Hill, in the middle of the Nevada desert, 250 miles east of Reno. During this time, back in Santa Cruz, illness took the life of his first child, almost claiming his wife as well. Perhaps this stirred a higher calling in him, because he came back to study medicine at the University of the Pacific in Oakland, graduating in 1877 with a medical degree. Happily, this was celebrated by the birth of Charles, his second child, in Santa Cruz.

Now officially “Doctor Charles Schulze”, he again took the long, arduous journey alone by train and stage coach back to Ruby Hill. He became the town doctor as well regaining his position as postmaster. Tragically, the strain of study and travel became too much and at the young age of 38, my great-grandfather Charles died suddenly of a stroke. He was buried in the Masonic cemetery in nearby Eureka in February, 1878, never again to rejoin his wife and child.

Young Charles lived quite an exciting life. After a short enlistment in the California Naval Militia during the 1898 Spanish American War, he worked as a conductor on the Santa Cruz Electric Railway. Upon moving to San Francisco with his mother in 1901, he became a motorman on the Sutro and Market Street Railway. Looking for something a bit more fulfilling, Charles took a job as a private patrolman for the famed Morse Detective Agency, with Chinatown as his beat. In 1905, he secured a position as an inspector for the U.S. Immigration Service. He was initially assigned to the old and decrepit Pacific Mail shed at Meigg’s Wharf, and then reassigned to the newly built immigration station on Angel Island in 1910.

In 1912, at the immigration detention center, against the backdrop of a multitude of immigrant hopes and dreams, disappointments and tragedies, Charles and Tye, two unlikely but kindred spirits met and fell in love. Despite having to fight prejudicial attitudes that hounded them for the rest of their marriage, they went on to have four successful and loving children. Charles passed away in 1934, and Tye lived on until 1972.

I stand today, the fourth generation son, in a small quiet graveyard just below the desolate ruins of Ruby Hill. I stretch out my hands to touch generations, hundreds of miles and a hundred years apart. I kneel down to touch the soil of the little Masonic graveyard with one hand, where my great-grandfather Dr. Carl Schulze has lain in an unmarked grave for 136 years. I reach out with my other hand to the shores of Angel Island where Carl’s son Charles walked with beautiful Tye Leung, perhaps hand-in-hand, always in secret. Finally, generations unite in spirit, my family’s Angel Island story has at last come full circle.

Author Ted Schulze, Charles and Tye’s grandson, notes, “I grew up in a neighborhood between Chinatown and Nob Hill, not unlike growing up between being Chinese and being American. I am blessed for knowing my grandmother Tye Leung as I was growing up. She never spoke to me in the morning unless I first said ‘Jo Sun, AhMah.’ Then I’d run off and watch the Saturday westerns on TV!”