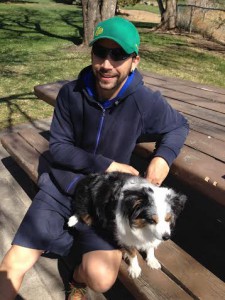 Nico and his dog Jovi

Nico was fortunate enough to have lived in a family who had enough economic stability to send him to study in America when he was in high school. His experience to study abroad was largely influenced by his father’s experience studying abroad when he was in high school. “My dad was an exchange student in the 80’s and I heard him tell stories, so in my mind it was always something that I thought I was going to get to do because it was kind of a legacy.”  Nico spoke of his experience first coming to the States as being just like an American movie. “My first time in America, the most I can remember is that everything was just like in the movies. There are big trucks, People go to fast food and all that crap that movies are about, that’s how most of the world gets an impression on how America is and it’s mostly pretty accurate.” Coming to the U.S. when he was young he was able to speak English well. He was able to pick up on slang quickly and his accent became less thick. It was during his exchange where he met the woman he later came to the U.S. to marry.

In 2003 when Nico made the decision to move to the U.S. to get married there was political and economic unrest in Argentina that made the decision to immigrate to the U.S. easier. There were protests against the war in Iraq, a flood causing 100,000 people to be evacuated from their homes, and a black out caused by the government affecting 400,000 people. Nico and his soon to be wife had heard about the Fiancé visa from friends who had used it. The decision to move to the U.S. was an easy one for Nico. He spoke of it not mattering where he was. He and his soon to be wife just wanted to be together. “We wanted to get married but more than anything else we wanted to be together.” The economic and political down turn acted as push factors while getting married and living in a more stable country acted as pull factors.

Immigration from Argentina to America was on the rise in the 1970s when there were many people fleeing political prosecution involved with the so-called Dirty War. Many of the people fleeing Argentina moved to large metropolitan areas in New York where they fit well into the existing Argentine and Italian cultures. Current immigration from Argentina to the U.S. is mostly done by academics who hold advanced degrees and come for medical and science work (Rodriguez, 2014). These new immigrants are continuing to settle in New York but many are also beginning to settle in large cities in Los Angeles where they are able to find a wider range of job opportunities in a more economically stable country (Rodriguez, 2014). Unlike the typical immigrant from Argentina to the U.S., Nico came not as an academic scholar nor did he immigrate to a large metropolitan city. Nico immigrated to Reno, Nevada with a high school education and English he had learned through an extracurricular program after school. According to Nico the reasons why he came to the United States to live were part of the reason he has been able to achieve the American Dream. When he made the decision that he wanted to come to the United States he quickly realized that he was not qualified for any of the other visas other than a tourist visa and he intended getting married eventually. Getting to America on the Fiancé visa was the easiest way for Nico to speed up his citizenship to the United States. “It was really hard for me to move to America in a way that would be fast. It takes a long time to get a visa to just come visit and to work. You need to be qualified to get a visa for that and to have somebody invite you in or something like that is practically impossible because there is no reason.”

Soon after he got married and followed the path to citizenship his wife wanted a divorce. This experience tested Nico’s decision to come to the United States. He began to question if he should return to Argentina to be with his family and friends because he felt as if there was nothing else left for him in America. Because he had just gotten a better job he decided to stay in the U.S. He felt support from his host family in America. Nico has been back to Argentina to visit but does not plan on ever moving back. He keeps in contact with his family through Skype. He says, “I think having web cams has helped make it easier not to miss people cause you get to see them and connect. I think that helps a lot but I still miss my mom.”

Once in the U.S. Nico needed to find a job but because he just had a visa and was waiting to get married to get his green card this process was difficult, as it is for many new immigrants. He was able to babysit for the family that he had lived with while in high school. They had just had twins. Once he got his green card and it was now legal for people to hire him he worked for a landscaping company that was owned by the father of the family he lived with on his exchange. Once in the company he was able to move up quickly by getting a driver’s license and using his bilingual skills, “I already had an edge over them [his co-workers in landscaping] cause some of them couldn’t communicate to the boss. As soon as I got my green card I was able to get my driver’s license… And immediately I got a promotion because I could drive the fleet.” This was the only time when he found it an advantage to be bilingual. He then worked for UPS and began to take classes at the local community college for computer skills. His education with technology got him desk jobs doing data input and eventually he was able to work his way up in the computer field to the job he has now in a managerial position in a computer tech company.

Nico feels that he has been able to live the American dream. He worked from the bottom and due to hard work and perseverance he was able to get to the point he is now where he is satisfied with his job, has remarried, and he and his wife have a dog named Jovi. He has stayed connected to his culture through food. He cooks traditional Argentinian dishes that learned from his parents. This is now some of his wife’s favorite food. He also participates in politics and is a proud Democrat who regularly participates in voting. Nico was fortunate enough to have the experience to travel to the U.S. in high school which led to his path to the U.S. in later years, but he says that he was able to achieve the American dream by working hard even when he didn’t want to.  Today Nico says that he has assimilated into American culture quite easily. “I didn’t come here to plant my Argentinian flag because there was a reason I chose where I wanted to be and I chose here, I wanted to be American.”