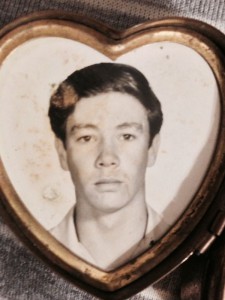 Passport photo of Genaro that his wife, Martha Estrada, kept it in her heart locket for the last 38 years.

Coming from a poor household, of a single mother and 7 siblings, Genaro Estrada decided to leave to America right before he turned 18 in order to support himself. Genaro’s brothers, Jose de Jesus (Chepe) and Jose Gaudalupe (Lupe), had already been living in Santa Ana, California since 1970 and 1971. Genaro, the 7th child and youngest male, made the journey from Tepatitlan, Jalisco in 1972. He would return home after a short period, and in 1973 make his final journey from Mexico to America.

During his first journey in 1972, he was frustrated because he had never left Mexico, and didn’t know what America would be like. Genaro was excited but scared as well. “At the same time one feels terror, you are terrified because walking, you can find a lot of things you don’t know. You’re in the dark.”

Genaro and the small group that he was with walked for 6-8 hours through Tijuana where they found a coyote who agreed to help them. On October 31st, they crossed the border and were taken to a safe-house where they stayed for two days in the garage. There were 30 men in the garage; they were fed once a day and there was no bathroom. Early one morning, Genaro and 6 others were in the trunk of a truck for an hour and a half going from San Icidro to Santa Ana.  Many immigrants from Mexico traveled to California, the state with the largest amount of immigrants from Mexico, followed by Texas, Illinois, and Arizona (Terrazas, 2010). In Santa Ana, the drivers waited for Genaro’s family to pick him up and pay $300 for the journey from Tijuana to Santa Ana. Today, the charge would have been around $10,000.

Genaro remembers Santa Ana was completely different from his hometown. “There was a lot of light, it was very quiet. The neighborhood was very quiet and tranquil that it made me scared to leave, because I didn’t know English.” He lived with his brother Chepe for 6 months, during which he struggled to find a job. With no hope of finding a job, he returned to Mexico.

Like many others, Genaro had expected to come to America, quickly find a job and make around $20,000 in a year and return to Mexico. Genaro did return, but with the same amount of money he came with only a few months before. 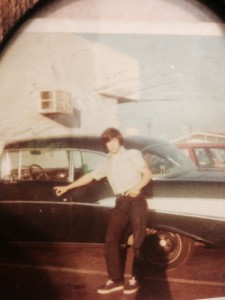 Genaro’s first job in America was to work on this car with his two brothers.

The 1965 Immigration Act allowed Genaro his return to America. Now immigrants could enter the United States if 1) an immediate family member had gained citizenship, 2) he or she had professional qualifications or 3) had a labor contract. His brother Chepe received his citizenship and on January 8th 1973, brought Genaro, their mother and a sister to America. They were one of the first of 70,141 Mexican immigrants admitted to the United States that year (Hernandez 25).

Genaro began working as a mechanic for boats. He was paid $3.25 an hour, and worked up to 70 hours a week, similar to Mexican immigrants in the early 1900’s who did farm picking (Takaki 298). There were 30-40 people working there, 20 who had also recently come from Mexico. Unlike other immigrants, Genaro was fortunate not to feel discrimination in the work place. He recalls the Americans and Mexicans getting along. Genaro’s employers admired his work ethic and skills, so they put him in charge of teaching new workers the different jobs. Many of the other Mexican workers he met had gone through similar experiences: they were poor in Mexico, and came to America seeking money and a better life. Genaro also made money by being a mechanic for friends and neighbors. Depending on the work he did, he would charge $30 for a tune-up and $100 to change a motor.

In 1973 he met Martha Perez at the Yost Theatre in Santa Ana. He spoke no English and she no Spanish. They married in 1974 and shortly after moved into their own home and started a family. In the early 1980s, more people were immigrating into Orange County from other parts of America. Many who immigrated were Asian and Latinos (Gyak 2). In 1985, Genaro remembers that Santa Ana began to flood with other Hispanic and Latino families and the community became primarily Hispanic. 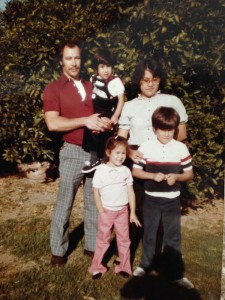 Genaro and Martha with their three children. Genaro is holding their youngest child Mario, Vanessa is their daughter, and Genaro Jr. who is the oldest. Circa 1984

“The culture changes, the culture from Mexico automatically ends here, because the culture is so much different,” he explained as his eyes drifted away thinking about the past. “It isn’t the same, the culture starts to end.” He misses his culture, traditions, customs, and celebrations. Genaro says it isn’t as easy to reunite people here in America as in Mexico, and continue the traditions from home. “It’s hard to continue with traditional foods. Before it was chile rellenos, enchiladas, and burritos. Now it’s pizza, spaghetti, hot dogs, hamburgers.” However, Genaro has held on close to his religion, which has helped him connect to his culture.

Genaro appreciated what America offered, which was the opportunity to do things he couldn’t in Mexico. For instance, in Mexico, he had to work after 6th grade, so he never had played soccer. In Santa Ana, he and his brothers, cousins and friends created a soccer team and played against other teams. They were all over the age of 30, but the game brought back memories of home and a connection to their culture.

“My life has completely changed for many reasons. I did what I knew and used what I knew. My situation today, being disabled, has knocked me down a little, but I continue to fight to make my situation better for my family.” The English language hasn’t affected his Spanish, but it has created a barrier. Genaro became disabled and gets frustrated because he can’t explain to his doctors how he is feeling, because they don’t know Spanish. His children and grandchildren also don’t speak Spanish, but he continues to teach them. He misses Mexico, but not enough to return permanently. Today, Mexico’s situation is even harder for families.

Author’s Note: Genaro Estrada Sr. is my grandfather. Growing up, I always wanted to know about his journey from Mexico to America. I was always told that I didnt need to know. As I got older, I told him that I do need to know because his story is also a part of who I am. My grandpa agreed and sat down with my grandma and me to share his story. Thank you to my grandpa and my grandma for sitting down with me to speak with me, and especially to my grandpa for sharing his story with me.

Takaki, Ronald. Chapter 12 El Norte: Up From Mexico. A Different Mirror: A History of Multicultural America. By Takaki. Back Bay Books: Little, Brown and Company:1993.   292-310. Print.

About the Author: Alexina Estrada is currently attending Mills College, class of 2017. She is currently considering majoring in Sociology and minoring in Journalism. She is the oldest of three siblings and the first in her family to attend college. She hopes to graduate college and build a career in Public Relations. 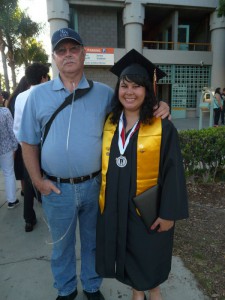 The most recent picture I have with my grandpa, is of him attending my high school graduation and making him proud.