A Life Worth Living

Wong Hoy Fun was born in 1843 in the village of Cheng Gong. He was an only child. When Hoy Fun was nine, both his parents passed away. His father was a coal-mining engineer who died in a mining cave-in. Hoy Fun was raised by relatives.

Hoy Fun’s job was to take care of the village water buffaloes. When he was 20 years old, Hoy Fun’s extended family members decided to finance his marriage so that he could perpetuate his family line. Subsequently Hoy Fun wed a woman from the Chin clan. They had one child – Wong Chong Mun, born in 1871.

Hoy Fun came to the US in 1876, leaving his family behind. He sought economic opportunity with determination and persistence but found danger instead. 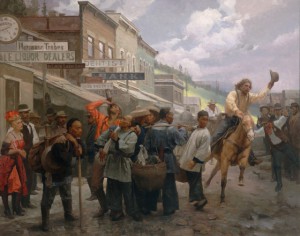 After landing in San Francisco, Hoy Fun traveled to Los Angeles to work for the Southern Pacific railroad. He served as the “coolie boss,” overseeing fellow Chinese who laid tracks going east to Texas. When his railroad job came to an end, Hoy Fun returned to San Francisco where he found employment in Chinatown, laboring at a laundry on Sacramento Street and selling lottery tickets door-to-door.  His last known place of work in the US was Deadwood, South Dakota, a gold mining town with a sizeable Chinese community located 1,000 miles away from San Francisco. There Hoy Fun worked for a Chinese-owned restaurant during the storied days of the Wild West.

When Hoy Fun arrived in the US, a national economic downturn was in effect. The “great depression” of 1873-to-1895 exacerbated the racism directed at the Chinese ever since they began arriving in 1850 to mine gold in California.  Chinese immigrants were scapegoated for low wages and high unemployment. Called the “yellow peril,” they were socially denigrated and ostracized.  The Chinese were targets of violence and legal discrimination as well.

In 1877 an anti-Chinese riot resulted in four deaths and the widespread destruction of property in San Francisco Chinatown. The Workingmen’s Party was instrumental in the 1879 adoption of a new California state constitution that denied the Chinese right to vote, barred them from employment by corporations, as well as state, county and local governments, and authorized their expulsion and segregation by cities and towns. In 1882, the US Congress enacted the Chinese Exclusion Act, the first and only US law to restrict immigration and naturalization on the basis of race. Twenty-eight Chinese were massacred during the anti-Chinese riot of 1885 in Rock Springs, Wyoming. 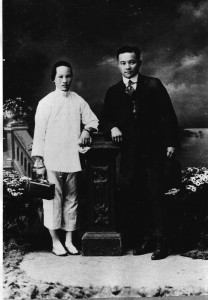 The stock market crash, bank failures, widespread unemployment, and the Anti-Chinese Movement combined to have adverse effects on Hoy Fun. A hard worker but ever poor, he was not able to send much money home to his wife and child in China. It was for this reason that the family home in Cheng Gong fell into disrepair.  At the same time, Hoy Fun was determined to finance the education of his son, Chong Mun. Believing that higher education was the key to a better life not only for his only child but also for future generations of the family, Hoy Fun succeeded in sending enough money to China to enable Chong Mun to obtain excellent schooling and earn the equivalent of a Ph.D.

Having done his best for his son, Hoy Fun subsequently took to smoking opium  – a legal, affordable, and easily obtainable drug – eventually succumbing to addiction. He also drank heavily.

A fortuneteller told Hoy Fun that he would not live beyond the age of 60. In order to die at home, he returned to China in 1901, but outlived the fortuneteller’s prophecy by 14 years. During this time, Hoy Fun frequented opium houses, relying upon his grandson, Gin Wing, to bring him safely home.

After its 1860 defeat by the British in the Second Opium War, China had been forced to legalize opium, which the British imported to China from India and sold quite profitably. A ten-year effort initiated by Empress Dowager Cixi led in 1916 to the prohibition of opium smoking and its importation.  However, opium addicts older than 60 were exempt from the law and were not required to go through rehabilitation. Among the exempt was Hoy Fun.

In 1915, Hoy Fun passed away at the age of 72. He was buried by Gin Wing and his granddaughter-in-law, Yel Sen. Gin Wing and Yel Sen took care to find a burial place for Hoy Fun that would augur well for the long-term health, happiness, and prosperity of the family. None of which they inherited from their grandfather. Hoy Fun’s only legacy was a belief in the pursuit of higher education as the family’s best means of achieving a truly good life. 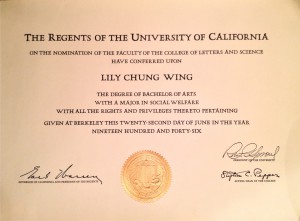 And so it came to be that Gin Wing and Yel Sen sent all six of their children to college and lived to see their grandchildren and oldest great-grandchild go to college too. Towards this end, they had immigrated to the US in 1922. They raised a family and ran restaurants in Evanston, Wyoming, all the while setting their sights on college for their children. Gin Wing even went so far as to submit – on his own– an application to the University of California at Berkeley for his oldest daughter.

College opened opportunities for Hoy Fun’s descendants to attain lives of health, happiness, and prosperity far different from his life spent facing the worst adversities of being Chinese in America. In this way, Hoy Fun left a lasting legacy of benefit to many generations and made his own life worth living.

Linda Wing is the great-great-granddaughter of Wong Hoy Fun.

A Life Worth Living