by Natalie D. and family

Natalie D. retells the story of her paternal grandmother and namesake, Nataliya Dolgriev.

Nataliya Dolgirev, also known as Bobbie, was our paternal grandmother. She immigrated to the United States during the Russian Revolution, traveling from Russia via Harbin, China and then to Vancouver, Canada by ship, before she arrived by train in the San Francisco Bay Area. We called her “Bobbie” because when we were little, growing up in Santa Rosa, California we did not speak Russian and could not say “babushka”, the Russian word for “grandmother,” so our parents taught us to call her “Bobbie.” 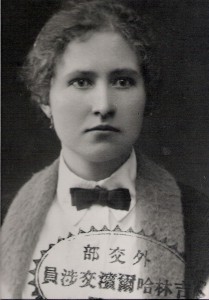 Nataliya Dolgirev, nee Romancheko, was born on Aug 18, 1897, one of 16 children in Vladivostok, a port city on the east coast of Russia.  The winters in Vladivostok were very cold, and Bobbie told us that the temperatures could drop to between -30 F and -60 F.  She recalled people ice skating on a river near Vladivostok that would freeze over in winter.

When the Russian Revolution started, people were living in constant fear. Reports of attacks, rapes, and murders occurred everywhere. It was a horrific and terrifying time.  Nataliya’s parents feared for their children’s safety and wanted to help them escape Russia but only had enough money to send one child out of the country. Being one of the eldest children, Nataliya was selected to flee the country.

Nataliya’s paternal uncle was comparatively wealthy and planned to escape Russia with his wife, and two children. Nataliya’s father asked his brother to take Nataliya with him. Her father wanted at least one of his children to survive the Russian Revolution since he did not have enough money to help his other children escape the country.  Her uncle agreed to take her. Nataliya was about 17 years old at the time. She was to serve as her cousins’ nanny and a maid to her uncle’s family.

Nataliya’s father gave her uncle most of her family’s savings to help pay for her way.  Nataliya traveled with her uncle and his family by train to Harbin, China and then by ship from Harbin to Vancouver, Canada.

Abandoned in the US:

Not long after their arrival in Vancouver, her uncle decided he didn’t want to settle in Canada and continued to travel to San Francisco with the idea to perhaps stay there.  Nataliya traveled with her uncle and his family to San Francisco from Vancouver by train.

After a brief stay in San Francisco, Nataliya’s uncle decided to relocate to the East Coast for New York. As the departure date drew closer, Nataliya was informed by her uncle that she was not invited to join them on this trip. She begged, wept, and pleaded with her uncle to let her travel with them to New York and not to abandon her. He refused and left San Francisco with his family the next day by train for the East Coast.

Alone and distraught, Nataliya did not know what to do and who she might turn to. She did not know anyone in San Francisco and did not speak a word of English. She had no connections and was alone in America with only a small amount of money given to her by her uncle.

Help from the church:

Nataliya was a devout Russian Orthodox and the church had always been at the heart of her family’s life and her community in Russia. She learned that there was a Russian Orthodox Church in San Francisco and found her way there. She threw herself on the mercy of the Russian Orthodox priest and explained that her father had entrusted Nataliya to her uncle’s care and after traveling half way around the world, her uncle had abandoned her in San Francisco. She told the priest that she only spoke Russian and that she did not know what would happen to her if the church wouldn’t help her. She begged the priest for help.

The priest took pity on Nataliya and let her stay in a room in one of the church buildings.  He also put out word through the Russian Orthodox community asking for housing and possible jobs and was able to find her housing and a job at the Levi-Strauss factory setting rivets on denim trousers. This was how she slowly gained a foothold in America and managed to survive.

Nataliya and Ivan were married in the Russian Orthodox Church in San Francisco. They later moved to Fairfax, CA to rent a small house with some land. They purchased a cow for milk and worked hard to save money with the dream of being able to purchase their own property and have a small farm. While living in Fairfax they had two children, Irene and Walter.

Nataliya and Ivan scrimped and saved every penny that they had, slowly building up their savings. Through hard work and frugality, they eventually bought a small farm in Sonoma County on the outskirts of Santa Rosa.

On their land, they raised a few young steer each year for beef and maintained a small herd of dairy cows for milk, a large flock of chickens for eggs and meat, and also fruit trees (pears and apples) and a large garden. They grew seasonal vegetables such as cabbage and beets in the winter and tomatoes, bell peppers, hot peppers, and green onions in the summer.  Once the steer had grown to full size, they sold most of them  at auction, saving one for their own use. With the milk they churned their own butter and made cream for the family as well as canned and preserved pears, apples and vegetables from the garden for the winter.

Nataliya and Ivan rarely spoke about surviving the Russian Revolution or the hardships of coming to America and starting life with nothing. It was too hard for them to talk about the past. When they did speak about it, usually in Russian to a family member who would translate, they looked haunted by the memories. On the few occasions when Nataliya spoke about her childhood and family in Russia, she always cried. She grieved terribly for the loss of her parents and siblings whom she never saw again.

Nataliya tried to find her family after the revolution when the Communists had taken over. She was able to locate at least one sister and they corresponded, albeit infrequently, by letter. However, with the advent of the Cold War, Nataliya’s family asked her to stop writing. They felt it was too dangerous for them to receive letters from America. So she stopped writing and lost all contact with them because of the political situation.

Ivan’s earliest memories were growing up as an orphan and working in a ship factory in Vladivostok, Russia. His remembered being about 5 years old and sweeping the shipyard floor of small pieces of scrap metal and other debris and picking up scraps by hand to put in a bucket to take outside to a scrap heap. He lived in factory housing with other orphans where they were fed gruel or hot cereal in the mornings and hot soup and black bread later in the day.  When he was a teenager, he joined the Tsar’s White Army and was a member of the cavalry. He fought on battlefields during the Russian Revolution, later escaping through China, where he worked until he was able to scrape together enough money to pay his ship passage to the U.S.

Remembering Nataliya aka “Bobbie” and Ivan aka “Grandpa John”:

Grandpa John enjoyed making his own spicy vodka, a Russian tradition. He would add dried hot peppers from his garden to bottles of vodka and let them marinate for many months or longer. He kept a variety of bottles of this vodka, all of varying strengths of “heat”. He would serve his special vodka during large holiday meals and festivities, such as Russian Christmas and Russian Easter, to the few brave men and women who were daring enough to try it. For the uninitiated, this special vodka could take one’s head off it was so very spicy. Ivan always laughed heartily, his blue eyes twinkling with mischief, when a first-time initiate would suddenly leap from the table and dash to the kitchen sink to gulp cold water directly from the faucet, having been overcome by the “fire” of his vodka.

Russian Orthodox holidays such as Christmas and Easter, were always a very special time at Bobbie and Grandpa John’s house. They would spend many days before such holidays, cooking, cleaning and preparing for a big family feast.  The family would all attend late-night mass with them at the Russian Orthodox Church, than return to their farm house in the early hours of the morning, to eat the holiday meal, which often didn’t end until 5 or 6 in the morning. At Easter, Bobbie and Grandpa John would secretly labor, making elaborate Russian Easter eggs with intricate designs, colored using beautiful, homemade dyes made from plants.

Bobbie and Grandpa John would separate the pennies, nickels and dimes into their own piles, and then carefully count the money and hand roll it. Grandpa John would then drag these very heavy bags of rolled change to the car, often asking for our father’s help to take the money to the bank and exchange it for bank notes. It was a very long, tedious process and often took many days to complete.

When they died, Bobbie and Grandpa John had saved tens of thousands of dollars at the bank, which they left to their children, in addition to their small farm and their little farmhouse painted robin’s eggshell blue.

Despite the great hardships and losses that they suffered, Bobbie and Grandpa John were very honest, ethical, hardworking people who devoted their lives to their family, church and the Russian Orthodox community. They survived the horrors of war, revolution, abandonment, and the loss of their families (they were both orphans, in a way). Yet they maintained their dignity and strength of spirit to go on.

They were proud to have survived and to have immigrated to America.  They bought a small farm, raised a family, and survived to see the births of their grandchildren, the next generation. They found peace. 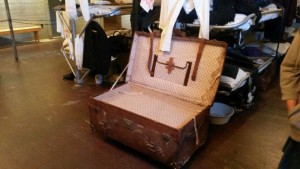 Nataliya Dolgirev’s steamer trunk she brought on her travels from Russia to San Francisco is part of the exhibit in the barracks at the US Immigration Station at Angel Island, as an example of luggage of the period.