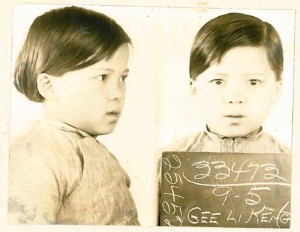 Li Keng was born in 1926 in Goon Doo Hahng, Hoishan (also known as Toishan), Guangdong, China, and came to the U.S. in 1933 at the age of seven. She grew up in Oakland Chinatown and still lives in the city of Oakland. With her mother and two sisters, she spent six days on Angel Island until they were able to reunite with her father. Li Keng taught elementary school for over thirty-five years and in 2006 wrote a book for young people about her life called Good Fortune: My Journey to Gold Mountain, which includes extensive details about her time on the island.

Because the immigration laws prohibited the wives of Chinese laborers from coming to the country, Li Keng’s mother had to pose as her aunt, and she, sisters Li Hong and Lai Wah, and Li Keng arrived in San Francisco on November 27, 1933. She described her first view of Angel Island as a seven year old girl in Good Fortune:

“The guard opened a locked door. I looked around as we stepped inside. We were in a large, rectangular hall with metal cots lined up inside. The windows and doors were barred by chicken wire. Lights hung down from the high ceiling. Despite the lights, the building was dark, bleak, gray, and depressing. I felt as if I were in a prison. Doors were locked shut with guards standing outside.

“I turned my mouth downward and frowned. Mama, Li Hong and Lai Wah kept quiet. I didn’t like being locked up. But as scared as I was, I didn’t utter a word.”

During the wait to be interrogated, Li Keng and her family got a sweet surprise when her father sent a box of fresh fruit – oranges and apples – for them. Li Keng suggested sharing the fruit with the other women in the top floor of the Administration Building, where they were housed.

Several days after arrival, Li Hong, and then Li Keng were questioned by the immigration officials through a translator.  Li Keng answered in response to questions, “I’m seven years old and attended school for one year. My mother died in the early part of 1933. My purpose for coming to the United States is to attend school. I plan to live in the United States for years to come.”

The family was questioned as a group the next day. “We nervously entered the boardroom again. The inspector, the stenographer, and the interpreter waited for us to be seated. We four focused our eyes on the interpreter.

“’We have just a few more questions to ask all of you. Don’t be nervous. Let me talk to Gee Lai Wah first, all right?’

“The interpreter’s voice was gentle. We all nodded in reply.

“Lai Wah, almost three years old, was bright, friendly and outgoing. She responded to the interpreter with a big smile and sparkling eyes.

“He looked at Lai Wah and asked pleasantly, ‘Little girl, what is your name, please?’

“Lai Wah retorted, ‘If you don’t tell me your name, why should I tell you my name?’

“Mama gasped. Li Hong and I exchanged glances. Lai Wah’s reply had been honest and natural. But would the officials think she was very rude?

“The interpreter translated Lai Wah’s reply into English for the inspector and stenographer. Both men roared like lions with their loud laughter. The interpreter joined in, ‘Ha, ha, ha!’”

“Mama, Li Hong, and I smiled. We felt wonderful. The tension we had felt a few minutes earlier had disappeared.

“Little sister Lai Wah’s quip had cinched the decision for the officials to allow us to stay in the United States. Hooray!”

Soon after, the family was released. The other women in the Administration Building were amazed that the family made it through the interrogation process so quickly. “‘You were here for only one week,’ one woman said. ‘That is a record. Some people have been here for weeks and months. Good luck to all of you. Have a good life in the United States.’”

The family settled in Oakland and eventually grew to six girls and one boy. Li Keng taught grade school in the East Bay for more than 35 years.

This short video about Li Keng Wong is from 1Light Video, produced by Shermaine Chan and directed by Ahmad Muhammad.

To learn the rest of her story, read Li Keng’s book, Good Fortune: My Journey to Gold Mountain, available through your local bookstore or on Amazon.com.

Li Keng’s book received the 2007 NCSS/CBC Notable Social Studies Trade Books for Young People and the 2007 award from the Bank Street College of Education for Best Children’s Books of the Year (Memoir Category).

We’re sorry to let you know that Li Keng Wong passed away in 2018. To read more about her amazing life, visit her obituary.