My grandfather Vaishno Das Bagai was born in Peshawar, India, in 1891, the younger of two sons. He was from a high-class family, well educated and an early supporter of India’s freedom and independence from the British. He was engaged to my grandmother Kala when they were about three or four years old, according to Indian custom then.

When he was twelve, and Kala was still eleven, they were married, and my grandmother went to live at her husband’s house. Initially she was quite lonely and sad being away from her family, but Vaishno’s family was very good to her and she grew to love her husband, who was very smart, handsome, hardworking, and full of ideals. They had three sons–Brij, Madan, and Ram (my father).

Vaishno’s mother died first.  Then in 1913 his father died, leaving all the property to Vaishno and his brother. By that time, Vaishno was working with the Gadar Party in San Francisco, an organization dedicated to the Indian freedom movement.  When a high-ranking member invited him to come to the U.S. to help their cause, Vaishno eagerly accepted because he wanted to raise his children in a free country and where they could better themselves. He asked his brother to sell some of their land so that he could use his portion of the inheritance to settle in America.

This photograph of Kala Bagai and her youngest son Ram appeared in the San Francisco Call-Post on September 17, 1915.

Vaishno arrived in San Francisco on September 6, 1915, with his wife and three young sons. At that time, there were very few Indian families on the West Coast.  Almost all of the Indian population were single male sojourners. The sight of South Asian women in San Francisco was such a rare occurrence that Kala’s arrival was covered by the San Francisco Call-Post with a photograph of her holding Ram in her arms. The article claimed that she was the “first Hindu woman to enter the city in ten years” and focused on the diamond nose ring that she wore—the latest fad from India.

The Bagais had an easier time at Angel Island than most Indian immigrants, who were being rejected in large numbers on grounds that they were “likely to become public charges.” Immigration authorities held the family for a few days and questioned Vaishno about why he had come and how he would support his family. They were immediately much less suspicious after Vaishno showed them he had brought $25,000 in gold with him.  Almost seventy years after her arrival in the U.S., my grandmother told us about her time on Angel Island: 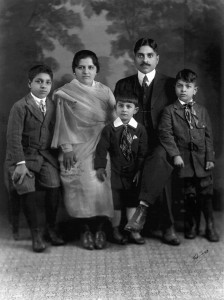 Why did we come to America? The Gadar movement wanted to take the British out of India. Mr. Bagai was in that movement. He said, “I don’t want to stay in this slave country, I want to go to America where there is no slavery.”

He got ready to come to America. His folks told him “don’t take your wife and children.” He says, “Supposing I go to America, I leave my wife here, and then after a few years, I come back and I may not like her, because I might like American people there. That’s why I am going to take her along and my children.” That’s how we all came together in America.

1915 we came. It happened to be Saturday, noon. And the boat people said, “You cannot leave today, Saturday and Sunday. Monday, the office will be open, then you can go.” So they put me separate with the two little boys. Brij was with his father. I couldn’t speak one word of English.  When the eating time came, they said “Chow, chow, chow,” so I understood that means to eat. So I went over there. I didn’t like the food at all. But I saw that they were selling some fruits, so I bought some fruits. But I did not know how much money to give. So I took the money and put it in my hand . . . and let him take whatever he wants. The third day, we left the [station], because we had plenty of money. There was no question of money. But they wanted to see. And I had all the jewelry on. 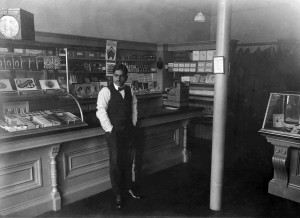 Vaishno relished his new life in America. He wore American suits, spoke English fluently, and adopted Western manners. He bought a home, ran an import business and general store called Bagai’s Bazaar, and became involved in the Gadar Party. In 1921, Vaishno applied for and became a naturalized U.S. citizen.

Kala, on the other hand, did not speak a word of English and she struggled with everyday tasks of shopping and caring for her three young boys without the help of servants or relatives. They eventually found a German family to take care of the children while Kala learned English and became accustomed to the new country. She recalled facing overt discrimination from their neighbors after they bought a home in Berkeley, California. When they pulled up to their new neighborhood with all their belongings, they found that the neighbors had locked the house so that the family could not move in.  “I told Mr. Bagai I don’t want to live in this neighborhood because they might hurt my children.” He agreed. “We paid for the house and they locked the doors? No!” The family moved back to San Francisco and lived above their store at 3159 Fillmore Street. 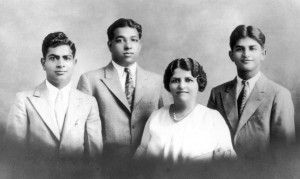 Then in 1923, the Supreme Court ruled in U.S. vs. Thind that Indians were not considered “white” and thus were ineligible for citizenship under the country’s laws. As a result, Vaishno and sixty-four other Indians who had become naturalized citizens were stripped of their U.S. citizenship. They were legally deemed persona non grata since they had renounced their British citizenship to become Americans.  Without the protection of U.S. citizenship, Vaishno was also subjected to California’s alien land laws. He was forced to liquidate his property, including his general store. The final insult came in 1928 when the government refused to grant Vaishno a U.S. passport to visit family and relatives in India. They suggested that he reapply for a British passport, but due to his allegiance to a free India, he vowed he would never become a British subject again.

Feeling trapped and betrayed, Vaishno went to San Jose alone on a business pretext, rented a room there, and took his own life by gas poisoning. He left behind farewell letters to his wife and three sons, urging them to go on without him and to lead a good life.  He also left a letter addressed to the San Francisco Examiner, explaining that he had no alternative left but to take his own life in protest.

I came to America thinking, dreaming and hoping to make this land my home. Sold my properties and brought more than twenty-five thousand dollars (gold) to this country, established myself and tried my very best to give my children the best American education.

In year 1921 the Federal court at San Francisco accepted me as a naturalized citizen of the United States and issued to my name the final certificate, giving therein the name and description of my wife and three sons. In last 12 or 13 years we all made ourselves as much Americanized as possible.

But they now come to me and say, I am no longer an American citizen. They will not permit me to buy my home and, lo, they even shall not issue me a passport to go back to India. Now what am I? What have I made of myself and my children? We cannot exercise our rights, we cannot leave this country. Humility and insults, who is responsible for all this? Myself and American government.

I do not choose to live the life of an interned person; yes, I am in a free country and can move about where and when I wish inside the country. Is life worth living in a gilded cage?  Obstacles this way, blockades that way, and the bridges burnt behind.

There is eventually a happy ending to the story. Although the family was initially traumatized, Kala did raise her three sons well. A few years after Vaishno’s death, she married Mahesh Chandra, a close friend of the family. One son, Madan, graduated from MIT with an engineering degree, but he could not find employment in the U.S. because of discrimination.  He returned to India to get married but died soon after due to an unfortunate illness.  Madan’s wife and son later came to live in Los Angeles with Kala and Mahesh. Brij attended junior college in Los Angeles for a time, then returned to India to marry sometime in the 1930s.  He lived in Lahore with his wife and three children until 1948, when they had to flee Pakistan during partition (as they were Hindus). The family also settled in Los Angeles, where Brij found work in aerospace manufacturing.

My father Ram got his B.S. in chemical engineering from Stanford University and his Master’s degree in cinematography from the University of Southern California.  Upon graduation in 1938 he became enthused with the gathering momentum of the Indian independence movement, and traveled with Gandhi and Nehru in India for a short time. When he returned to the U.S., he worked for the war effort in Ohio and married an American woman he met there. They raised four children in Los Angeles, where he partnered in a plating business and also worked as a management consultant.  But Ram’s real love was in film.  He became president of the Hollywood Foreign Press Association (which gives out the Golden Globe awards) and during the ‘50s and ‘60s introduced many Indian films as art films to an appreciative American audience.

Kala, Brij, and Ram finally received their own U.S. citizenship after Congress passed the Luce-Celler Act in 1946.