So Close But, So Far

My grandmother Kanta Chandra was born in Delhi, India, in 1896, the oldest daughter and fourth child of six.  After the death of her parents and to avoid being sent to live with a dreadful uncle, five of the children decided to run away to America with what money their father had left them.  The only place they knew in the U.S. was San Francisco because their oldest brother had attended the University of California, Berkeley, a few years earlier.  To save money, they reported younger ages to secure tickets at children fare.  On a summers day in June 1910, they boarded a ship in Calcutta not knowing what they would find or where life would take them, just knowing that they wanted to stay together as a family.

Their steamship Manchuria arrived in San Francisco on July 2, 1910.  The Fourth of July weekend delayed the business of immigrant inspectors and the children were placed in detention.  Many years later when we went to Angel Island for a family picnic on the Fourth of July, my grandmother told me that they had not been treated very well because they were suspected of having TB.  She showed us the buildings where they had been kept and where she remembered saying to herself as she looked out of the window across the bay to San Francisco, “So close but, so far.”  She was just 13 years old then. 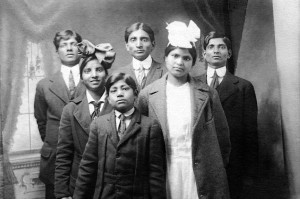 The Chandra family soon after their arrival in America in 1910.  Back row, from left to right: Ramesh, Ishwar, and Mahesh. Middle row: Kanta and Prabha. Front row: Krishna.  All of them would go on to graduate from American universities.  (Courtesy of Liana Belloni.)

After a few days, the family was admitted into the country.  They struggled through hard years, picking fruit for a living and sleeping in the orchards at night.  Despite the hardships, they strove to survive and succeed.  In 1916, while a high school student, Kanta became the first South Asian woman to apply for U.S. citizenship, but she did not receive her citizenship until 1969.  She later married Saliendra Nath Gupta, a pharmacist, and they had three children.  After her husband died in 1929, Kanta supported her family through cleaning jobs while earning a nursing degree and then a chiropractic degree.  She established a successful practice in San Francisco.  Kanta also spoke and wrote passionately about women’s education and Indian independence as a Gadar (Rebellion) Party activist in the 1930s and 1940s.  She invested wisely in property and was able to retire from her medical practice in 1961.  Kanta Chandra died in 1982 at the age of 86.

So Close But, So Far