In 2009, after Mabel had passed away, our family obtained the Freedom of Information Act A-files on Mabel’s mother Soto Shee. Within those files were details of their immigration experience that were previously unknown to us. It is a story of survival and hope.

Leaving the eldest son with family members in Hoiping, Guangdong, China, the family of four traveled the first leg of their trip to Hong Kong. On June 27, 1924, they boarded the S.S. Shinyo Maru for San Francisco.  On the ship’s passenger list are Mabel’s mother Soto Shee, father Lim Lee and her seven month old brother Soon Din. Mabel boarded too but didn’t need a ticket because she was in utero.

The sea voyage was 27 days, arriving in the San Francisco Bay on July 23, 1924. Years later Mabel would recount the story that her Mom would always tell — that her Mom was seasick the whole time and it was a miracle that she did not suffer a miscarriage.  Little did Mabel know that she survived other miracles as well. 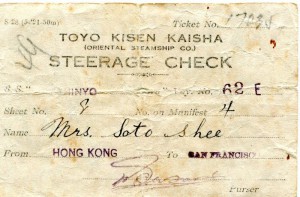 Their tickets were for “Steerage Class”, the cheapest tickets and the worst conditions. This was no luxury cruise. No separate cabins. Instead they shared the large hull of the ship near the engine room with hundreds of other steerage passengers. Dank, dark, and crowded. Noisy, with no privacy, sleeping in tiered bunks. Limited toilet facilities and stench.  Rationed food and water.

Mabel’s survival in utero depended on her mother Soto Shee getting enough to eat and drink and to stay healthy. She was really eating for three. She needed nourishment for 1) her own body, 2) her pregnancy, and 3) extra nutrition to breastfeed Baby Soon Din. Who knows how much she was able to eat, much less keep down, due to seasickness and the nausea and vomiting common in the first trimester of pregnancy. It may have been near impossible for Soto Shee to get adequate nutrition and hydration during that month at sea. Soto Shee was right. It was a miracle that she did not suffer a miscarriage. 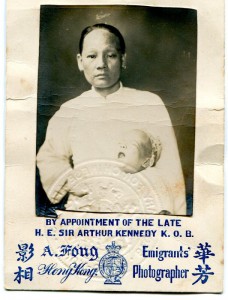 Arriving at Angel Island, the sanitary conditions were extremely poor.  Conditions were so bad that year that the Chinese Benevolent Association brought the problem of unhealthy conditions to the attention of President Calvin Coolidge and Secretary of Labor J.J. Davis. The case was made that several detainees had become ill and even died due to the poor conditions at the immigration station. Even years later, there were documented complaints of not having toilet paper or soap.

On August 10, 1924, two and a half weeks after their arrival, the unthinkable happened. Mabel’s infant brother Soon Din died on Angel Island. The cause of death was gastroenteritis, a condition usually caused by a virus or bacteria, transmitted by contaminated water or food leading to severe vomiting and diarrhea. Gastroenteritis is highly contagious. Soto Shee was surely at high risk of contracting gastroenteritis herself with her intimate contact with Baby Soon Din, and having to handle and clean up his watery stools. Gastroenteritis in a pregnant woman could lead to severe dehydration and fever which would put her fetus at  risk of death or a miscarriage. But again, both Soto Shee and Mabel survived.

The Third Miracle: Surviving the Despair

Imagine Soto Shee’s grief with the death of her baby boy. She was alone, in detention in a foreign country, unable to understand the language and details of her circumstances. She was separated from her husband, who, as an American citizen was landed in San Francisco the same day that the ship arrived. Baby Soon Din’s body was taken from her and delivered to his father in San Francisco.  Soto Shee was not allowed to leave Angel Island to attend her baby’s funeral and burial in San Francisco because she was deemed illegal. In fact, she was to be deported due to the newly passed Immigration Act of 1924, effective July 1, 1924. Prior to that date, Chinese wives of American citizens were admissible. Had she arrived just 1 month earlier, she would have met the criteria for admission into the U.S.  But starting July 1, the law changed, specifying that alien Chinese wives of American citizens were no longer admissible. Because an appeal was filed, Soto Shee was able to postpone her deportation date and stay on Angel Island until her case was reviewed.

At the time of Baby Soon Din’s death, Soto Shee was aware that she was pregnant with Mabel. Her attorney pleaded with immigration officials to understand her tragic circumstances and requested that Soto Shee be released on bond from Angel Island to be with her husband in San Francisco. But officials in Washington DC responded that there was no hardship here and denied the request.

In her despair on the night of September 4, 1924, Soto Shee hanged herself in the women’s lavatory at Angel Island. Fortunately, Matron Grace McKeener who oversaw the women’s barracks found her hanging and cut her down. Both Soto Shee and Mabel were rescued. If Ms. McKeener had found them just a few minutes later, it may have been too late.  Another miracle. They survived. 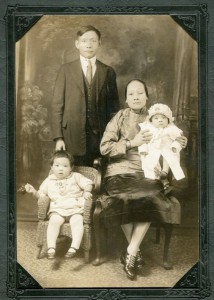 Mabel was born on February 26, 1925 at 775-1/2 Commercial St. in San Francisco Chinatown. Her parents gave her the Chinese name “May Ho”. Mabel always told us that her parents named her very intentionally.  ‘May’ as in ‘Mei Gwok’, the Cantonese word for ‘America’ or its direct translation ‘Beautiful Country’, and ‘Ho’ meaning  ‘good’ in Cantonese. Somehow, despite this incredibly rocky start, her parents maintained hope that life would be good for them and for Mabel in America.

Soto Shee (1896 – 1992) was released from Angel Island for temporary admission on bond some time in 1925, and joined her husband Lim Lee in San Francisco. For the next 5 years, they fought the deportation and won in 1930. They eventually had a total of eight children in the U.S. and many grandchildren and great-grandchildren. Soto Shee lived to age 96.

Mabel Lim (1925 – 2009) lived out her childhood in San Francisco Chinatown, attending school at Commodore Stockton Elementary School, Francisco Jr. High, and Commerce High School. After high school, she moved with her family to Marysville, California, where she married Ken Ang. She had two children and two grandchildren.  She lived to age 83.

For more information on Soto Shee’s story, read “Soto Shee: A Story of Survival and Hope,” by Soto Shee’s granddaughter-in-law Kathy Ang, pages 250-253 in the second edition of Island: Poetry and History of Chinese Immigrants on Angel Island, 1910 to 1940, by Him Mark Lai, Genny Lim, and Judy Yung (2014, University of Washington Press).