At age 12, Tye Leung Schulze ran away from home to escape an arranged marriage and ended up in a mission home helping to save girls from brothels.  She later became the first Chinese American woman to pass the civil service examination and receive a federal service position, as an interpreter on Angel Island, and at 24 or 25, Tye became the first Chinese American woman to cast a ballot in a presidential election.  A San Francisco Daily News article lauded her as the first Chinese woman in the history of the world to exercise the electoral franchise.  Her achievements contributed immensely in shaping the experience of Chinese Americans in San Francisco. 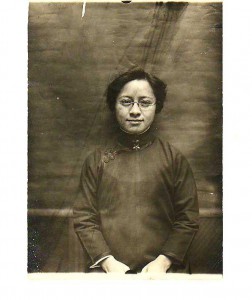 In 1887, Tye was born in San Francisco.  She was the youngest of eight children and the daughter of immigrants from Guangdong province, China.  Her father worked at a shoe factory, and her mother ran a boarding house for women.  The family of ten lived in a two-room apartment.  In her essay “Tiny,” Tye recalled that she “used to go to two gambling houses to get the leftover for their meals to feed our family.”  She was also able to attend a missionary school to learn English where she was well liked by teachers who often took her to church meetings.  This would be Tye’s first introduction to Christianity, a religion that would heavily shape the rest of her life.

At the age of nine, Tye’s mother sent her to work as a servant in another household.  Tye recalls that this family was “nice to me,” but at the time, did not fully grasp that she had been sold to another family.  Tye’s uncle, however, found out what had happened and brought Tye to her mission school teachers who arranged for her to return home.  After going home, she was occasionally allowed to attend school and Sunday school but did not venture outside of her home much more during this period because, as Tye puts it, “no girls were allow to go out that much.  They must stay home learn to sew, and housewife’s duties.”

When Tye was twelve, her parents arranged for her fourteen-year-old sister to marry a man in Butte, Montana; however, her sister ran away with another man before the wedding.  Tye’s parents then wanted Tye to take her sister’s place and marry the same man.  She, however, refused and ran away to the Chinatown’s Presbyterian Mission Home, an organization presently known as Cameron House.  The home was managed by Donaldina Cameron, a woman famous for rescuing girls smuggled from China and sold as prostitutes and domestic servants.  At the home, Tye became even more devoted to the Christian faith.  She also learned English and became very close to Donaldina Cameron who nicknamed Tye “Tiny” because she stood barely over four feet tall.   Tye served as an interpreter for girls in Chinatown who had been forced into prostitution, helping to rescue many of these girls and interpreting for them in court.  According to Cameron, “There [was] hardly a court in San Francisco or Oakland where Tye Leung [was] not known and welcome as an excellent interpreter.” 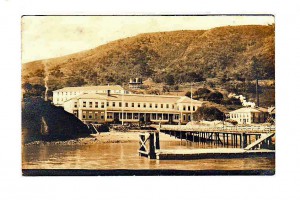 In 1910, the Commissioner of Immigration decided they wanted a Chinese woman to help with interpretation on Angel Island and Cameron suggested Tye.  Shortly after, Tye became the first Chinese American woman to pass the civil service examination and receive a federal civil service position.  Her achievement was chronicled in the New York Daily Tribune and the San Francisco Daily News.  In the San Francisco Daily News article, Tye was interviewed and asked about her experience as an interpreter.  She replied, “Dull?—never.  Always sitting there listening to my countrymen.  I listen for little scraps about the great new movement over the sea, that is setting them free over there as I have been set free here.”

In 1912, at the age of 24 or 25, she garnered national attention for being the first Chinese American woman to vote in a US primary election.  On May 15, 1912, the San Francisco Call published an article about Tye titled “Celestial Maid Cast Her Vote,” which opened with the sentence “For the first time in the history of the world, a Chinese woman exercised her right to vote yesterday when Tie Leung, a demure 21 year old Chinese maiden cast her ballot for her choice for presidential candidate.”  On the same day, a San Francisco Examiner article marked the event as “the latest achievement in the great American work of amalgamating and lifting up all the races of the earth.”  Most humorously, an article published in both the San Francisco Chronicle and the Oakland Tribune featured a picture of Tye in the driver’s seat of a Studebaker convertible.  The article likened Tye to Sun Yat Sen, the founder of the Republic of China, because according to the article, both embraced of democracy and according to the article both had an affinity the American Studebaker cars, a comparison the author of the article seemed to make in a completely non-ironic manner (Tye’s son Fred later noted she never owned or drove a car in her life).  The same article praised Tye for being able to “read and write the English language better than a great many of her adult brethren” and for being “altogether familiar with the political issues involved in the Presidential primary election.”  When asked how she felt about voting, Tye replied “’My first vote?—Oh, yes I thought long over that.  I studied; I read about all your men who wish to be president.  I learned about the new laws.  I wanted to KNOW what was right, not to act blindly.  I think the American ladies are like that too.  For everywhere I heard talk about the election and the candidates.  I think we should learn, not vote blindly, since we have been given this right to say which man we think is the greatest.’”

Marriage and Life after Angel Island 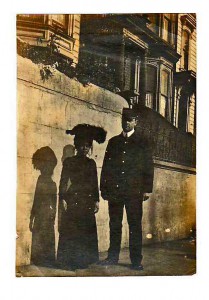 While working at Angel Island, Tye met and fell in love with Charles Frederick Schulze, an immigration inspector on the island.  Because of anti-miscegenation laws, they could not marry in California, so in 1913, the couple went to Vancouver, Washington, the nearest state that allowed for interracial marriage, for their wedding.  Their families did not approve of the union.  Newspapers published short articles about their marriage with headlines like “White Man Weds Chinese Maiden” and “Little Dan Cupid Does Strange Tricks.”  Upon returning to San Francisco, they found that their marriage had cost them their jobs, and both Tye and her husband were forced to resign from their positions on Angel Island.

It was difficult for the two to find steady work afterwards.  Charles finally ended up working as a mechanic and telephone repairman at the Southern Pacific Company.  Tye worked for a year at the Chinese Tea Garden.  She then returned to school to learn bookkeeping and worked at the Chinese Hospital as an administrative clerk, bookkeeper, and social worker.  In 1926, she began working as a phone operator at the Pacific Telephone’s China Exchange, a high profile job for women at the time, and stayed for twenty years.  Her job as a telephone operator, in addition to her previous work as an interpreter, made her a prominent figure in Chinatown and a fixture of the community. When interviewed about his mother, her son Fred recalls, “’The thing I remember most about my mom, she was always asked to interpret.  GI Brides, immigration, court cases.  She never refused to help.”  During the 1930’s, when pinball machines were introduced in Chinatown, she was known throughout Chinatown for spending hours playing with them.  Together, she and Frederick had four children, two girls and two boys, before his death in 1935.

View Tye Leung Schulze’s Story and its relevance to the current day in a ten-minute video on the Unladylike2020 website from PBS’s American Masters series.

To learn more about Charles Schulze, visit his story on Immigrant Voices.

Lia Dun wrote this article in 2012 when she was a student at Yale University and an intern at the Angel Island Immigration Station Foundation.

Tye’s grandson Ted Schulze told the story of Tye and Charles at the release of the paperback edition of Erika Lee and Judy Yung’s Angel Island: Immigrant Gateway to America on June 30, 2012. Click here to watch the video.