Portrait of a Female Chinese Immigrant 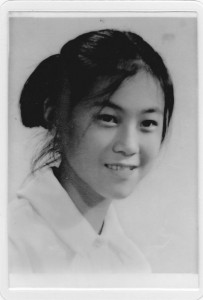 Katherine Kaitak Ma immigrated to the United States in 1985. Growing up in Guangzhou, Katherine and her family worked hard but always felt like there were more opportunities for them elsewhere. “I wanted to do more and live better,” said Katherine.

Katherine felt limited under the strict regulation of the Communist government and decided to move to Hong Kong as a teen. Leaving her family behind, she immigrated to Hong Kong and started a new life for herself. During the time that she was living there, Hong Kong was a temporary colony of the British Empire. In 1997, it would be back under the control of China. Fearing that she would once again be living under the same limitations as those present in her hometown, Katherine considered moving to the United States.

“I did not want to be in one place for all my life. I want to go to see more things and go to more places.” said Katherine. She knew that there were better opportunities and adventures beyond the borders of her home country. Her move to Hong Kong from mainland China gave Katherine many new job and social opportunities but she believed that United States would be able to provide many more. Katherine recalled that her “biggest fear [when contemplating the move to the U.S.] was the English language.” She had grown up speaking Cantonese in her hometown and continued to do so when she had moved to Hong Kong. Despite many British influences in her new home, it wasn’t necessary to be fluent or even learn English. The idea of having to conquer a new language was more daunting than establishing a new social circle.

Osman had already established a life in the Bay Area so they made Oakland their home. As the oldest of the four children in the family, Katherine felt that it was her responsibility to bring her siblings and her parents to the U.S. Osman and Katherine Ma were fortunate to have connections in the area through the Chinese community and able to find assistance with both jobs and bringing their families over. They started their own business in Oakland and helped their family find work in the area as well. During the first few years of her life in the U.S., Katherine struggled with learning the English language.

As their business grew and became part of the community, Osman and Katherine were able to move their family to Piedmont just in time for their first child to enter first grade. In Katherine’s opinion, the move to Piedmont was expensive but necessary. It is common behavior for many Chinese immigrants to sacrifice to provide the best possible education for their children. The move to Piedmont was to provide a better neighborhood for her family. The home that they had been living in Oakland was part of a tight-knit , predominately Chinese community. Most families were made up of immigrant parents and second-generation children. In this neighborhood, it was easy to go through entire days without needing to speak English. Teachers, parents, and students at the elementary school that her daughter attended and many of her customers at this time were mainly Cantonese speakers. In this ethnic enclave, Katherine’s children were able to develop fluent Cantonese skills while immersed in the Chinese culture in the Oakland hills. “There are aspects of Chinese culture that I want to pass onto my children. These qualities would not only benefit members of the Chinese community but others as well. I also think that there are many great aspects of American culture,” Katherine said.

When her daughter turned five, Katherine decided that she wanted her family to be more exposed to American culture and put her children in a exclusively English-speaking learning environment.

Over the last two decades, Katherine and Osman have established their business in the Oakland community and their family in Piedmont. Katherine still struggles with the English language and being judged for having a thick accent. She has realized that the customers at her store are predominantly English-speaking so she continues to develop her language skills. Together with her husband, Katherine works to adapt her business to the needs of her bilingual client base. The changing economy and the most recent recession has taken away from the annual revenues of their hardware store. Katherine and her husband have turned to investing their hard-earned money in more promising ventures in their homeland. At one point in her life, Katherine saw the United States as the ultimate opportunity to improve her quality of life. Now it seems that China may have more to offer her.

“Moving to the United States represented getting more freedoms.” Despite the tough times that she has encountered, Katherine does not regret moving from China to the United States. Her life in America has not been ideal but she believes that immigrating was the best decision that she could have made for herself and her family. Katherine misses the Chinese culture and friends she left behind but has no immediate plans to move back.

For now, she quite likes the American lifestyle. But there are many things that she still likes about China and Hong Kong. There is a possibility that she might go back to her home country if she were able to help other people. She would want to bring positive aspects of American culture to people in China. The immigration process has become much easier since Katherine immigrated in 1985 but there are still many challenges awaiting immigrants once they get here. Katherine believes that is is beneficial to have an established family and support networks but her best “advice for future immigrants is to learn English.”

The Future of Immigration

A history of immigration has created a strong, tight-knit community of Chinese and their descendants. I believe that the future of immigration for Chinese and American born Chinese descendants will be one of reverse immigration. China’s growing economy is an opportunity for Chinese immigrants and American born Chinese to reconnect with their culture and take part in a thriving marketplace. In the past, Chinese immigrants left their homeland to avoid the Communist takeover, to find new job opportunities, and to create a better life for themselves and their families. The current economy does not present many job opportunities and it is a constant struggle for many to maintain their lifestyle. It is no longer an advantage to follow one’s husband or family to the United States. It is much more financially beneficial to establish new connections in the home country. Entry barriers are essentially eliminated and there are no laws or restrictions to prevent reverse immigration. The Chinese community has shown that they can adapt and survive despite many challenging events in their history. They are sure to find a way to thrive in the current national economic hardships.

Portrait of a Female Chinese Immigrant