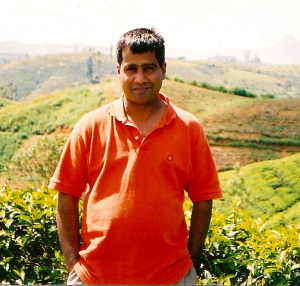 Sri Lanka is a small island country located to the southeast of India.  It is 25,000 square miles in area and has a population of about 18 million people.  It is home to two main ethnic groups: the Sinhalese and the Tamils.  The Sinhalese are the majority at 74% of the population and the Tamils account for 18%.  While the Tamils were favored during British rule, since 1948 when Sri Lanka gained independence there has been systematic discrimination of the Tamils and with it constant fighting.  The most recent civil war between the two groups started in 1983 and ended in 2009.

The American colonial immigration story cannot be told without also telling the story of starving Irish peasants or abused Native Americans.  Neither can today’s American immigrations be separated from connected violence or hardship.  Mr. Emayan likened Sri Lankan immigration to the Jewish immigration story and there are, in fact, many similarities.  The discrimination and violence in Russia forced out a huge percentage of the Jewish population, much like is happening to the Tamil population in Sri Lanka.  A strong drive for education and better economic standing helped Jewish immigrants assimilate and now the same is true for many Asian immigrants.  H1-B visas, which allow high-skill immigrant into the United States, are playing a huge role in that Asian, and also African, immigration.  Highly skilled workers from poorer countries, such as doctors, scientists, and computer technicians are struggling to find work at home and leave to seek better job opportunities abroad.

When Mr. Emayan left Sri Lanka for London, England in 1985, it had been two years since the start of the civil war.  Mr. Emayan, like most in northern Sri Lanka, is a Tamil and saw the discrimination and violence firsthand.  The Tamil Liberation group began fighting for Tamil rights peacefully but later became armed.  As the fighting escalated, Mr. Emayan’s parents saw the chance for him to leave.  Portes and Rumbaut (2006) claim in Immigrant America that parents’ education level and father’s occupation have tremendous affect on the ability and inclination to immigrate and this seems to hold true for Mr. Emayan.  His parents were both highly educated and his father was a successful chemistry professor.  They were affluent and had the ability to send him away for schooling, unlike many other Tamil families stuck in poverty.  This allowed Mr. Emayan to escape the violence and to receive higher education.  By going overseas and pursuing a successful career path, Mr. Emayan could ensure his future and help his family.

While his family was affluent in Sri Lanka it was still difficult to pay for Mr. Emayan’s education in London.  His father took a better-paying university job in Nigeria to help offset the costs, thus becoming an immigrant himself.  This sacrifice for a child’s sake is all too common in immigration stories.  His mother remained in Sri Lanka to raise their other two children.

Mr. Emayan was the first of his immediate family to emigrate out of Sri Lanka and that made it hard to leave but he says, “Looking back, it was the best thing.”  Mr. Emayan had cousins living in London and was able to stay with them and not feel so far from home.  The community already present tempered the shock of arriving in a new urban city, so different from Point Pedro.  They helped him settle into London and also helped him with schoolwork.  Mr. Emayan received his Bachelor of Science from Kingston University and after working for a year, went to the Imperial College at the University of London for his Ph.D.

While he was in London, he met Tracy, his future wife.  She was an American student studying abroad and she quickly changed his life.  Right away they knew they wanted to live in the United States together and even wrote to the American embassy to learn the best way to get married to get Mr. Emayan into the country legally.  Following the embassy’s suggestions, they married while still in England and soon after, Mr. Emayan was offered a post-doctorate at a university in Cape Town, South Africa, where he completed the papers for his American green card.  Once in the United States, it would take only three years to become a citizen, not the usual five, because his wife was an American citizen. 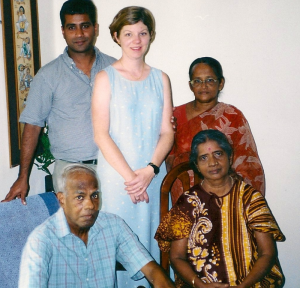 Mr. Emayan and his wife visiting family in Sri Lanka.

While Mr. Emayan has never felt discrimination as an immigrant, his time in South Africa was not without incident.  It was 1996, just after apartheid was abolished in 1994, and while the atmosphere in the university was fully inclusive, the outside world was another story.  When Mr. Emayan and his wife would go around town, they would get negative attention because of their contrasting skin colors.  Tracy was even asked, “What [are you] doing with this colored guy?”  Mr. Emayan is able to take a rational view of the racism and says, “Someone is born in apartheid and grows up for 80 years, how do you go and tell the person ‘now it’s different, now it’s changed.’  You can’t.  It has to take time…it’s all time, it’s all learning, I think.  For any country it’s better to learn sooner than later.”

Mr. Emayan and his wife arrived in the United States in 1997, after a year in Cape Town.  They flew into Chicago and spent a month with Tracy’s family in Wisconsin.  Mr. Emayan recalls his first impression of the United States being “everything is big.”  They drove to Tallahassee, Florida where they lived for two years.  Soon after, he received a job in Richmond, California where he worked for eight years.  After the company was bought out by a larger one and the research facility closed, Mr. Emayan was offered his current job in Oakland, California.

Mr. Emayan loves his work in research because everyday is different and he never knows what is coming next.  He originally went into chemistry because his father was a chemistry professor.  He sees many American students shying away from science careers and turning to law school or business programs.  That space left behind is filled with immigrants and the children of immigrants who have a stronger emphasis on science and the possibilities of a career in that path.  Many of his friends from Point Pedro who also immigrated have successful careers in science and are able to live good lives.  Mr. Emayan remembers a strong belief in education in his hometown in Sri Lanka and that translated into their lives here in America.

“The U.S. is a better place for an immigrant,” says Mr. Emayan when asked of workplace discrimination.  While London was a melting pot, California is a special and unique place where one is able to succeed no matter their background.  He has friends from Sri Lanka who felt a ceiling was placed over them in the United Kingdom and there was only a certain career point they could reach because of their ethnicity.  However, Mr. Emayan believes in the United States that does not exist, and with hard work and education a person can do anything.

In particular, Berkeley, California has special qualities that Mr. Emayan feels makes it a perfect place to live.  He says that people in Berkeley think broadly and the children learn about acceptance in school.  As an example, Mr. Emayan says that his daughter is learning about lesbian and gay inequalities in school.  If they were still living in Tallahassee, that would not be the case.  To come to Berkeley after Tallahassee would be a shock for his daughter whereas now she can go anywhere and be accepting and tolerant.

Raising his daughter in the United States is made simpler because his wife is American.  To Mr. Emayan when he first arrived “it [was] not a stranger’s country, it [was] my wife’s country.”  While there are a few cultural aspects he passes on to her, his daughter is fully American.  She is however, curious about her heritage and encouraged Mr. Emayan to plan a trip to Sri Lanka to see his childhood town.  Because his wife is American he differs in some ways from his relatives’ families, where both husband and wife are Sri Lankan.  They don’t eat Sri Lankan food, his daughter isn’t learning Tamil, and they are not Hindu.  He does teach her “little words in Tamil, ‘mother, father, brother, sister, cousin,’” but says it’s “just for fun.”  “There’s no point in teaching something if she’s not going to use it… Might as well teach Spanish, Chinese, or French, or German and they can use it.”  Even Mr. Emayan’s niece who is on her way to being a doctor in Australia can understand Tamil but never speaks it, similar to many 2nd generation children.

Sri Lanka is currently having huge political battles and enormous violence but because it is a small country with little to recommend it economically, it is rarely seen in the American news.  Mr. Emayan works hard to stay informed about the current events in Sri Lanka and takes care to get the best, unbiased news he can find online.  He and his relatives strive to stay informed, sometimes send money back home, and are a voice for the oppressed Tamils in Sri Lanka.

“Seen a lot of people dying.  The sad thing is those people fighting, their cause is for Tamils.  I am a Tamil.  But most of the affluent Tamils, we left.  And we are having different, good life. So most of the people who fought are not affluent people. So if there is no voice outside to fight for them, they have nothing, they have no one.  Because they are not capable.  They don’t have means and they don’t have a voice and they don’t have the energy; they got beat up.” 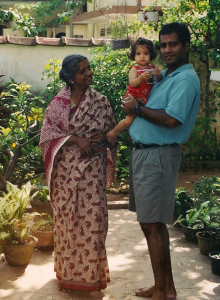 Mr. Emayan with his mother and daughter

Mr. Emayan’s mother is the last of his immediate family still in Sri Lanka but she will soon be moving to live with her daughter in Australia.  When she does, his entire immediate family will be living in Australia.  This is because at the time of their immigration, Australia had an open immigration policy that welcomed well-educated immigrants and people with good careers.  It was based on a point system and the more points in your favor, the more likely you were to be chosen to in-migrate.  Once you were there, you could easily bring your relatives, which is why Mr. Emayan’s whole family is together in Australia.

While Australia seems far away, because of modern technology it is not difficult for Mr. Emayan to stay in touch with his family.  Through Skype, telephone calls, and email he stays in close contact and doesn’t feel the distance as much.  He doesn’t consider the plane ride a hardship, either.  If he decides to visit, he can be in Sydney by the next morning and to Mr. Emayan the great thing about “family and close friends is no matter how far, you haven’t seen them, if you see them tomorrow it’s like you saw them yesterday.”

Since leaving Sri Lanka in 1985, Mr. Emayan has been back a few times and is currently planning another trip with his wife and daughter.  There are many children in orphanages living without parents because of the violence, and he would like to take toys back to donate.  He also considers going back and teaching at a Sri Lankan university when his daughter is older and out of the house.  Mr. Emayan would like to give back to Sri Lanka now that he is successful, but he would not move back permanently.  “This is home,” he says of Berkeley, but he also says, “I took myself out of Sri Lanka but I can’t take Sri Lanka out of myself.”

Essay based on a personal interview with Kumar Emayan by Meagan Travlos.  Ms. Travlos is a sociology student at Mills College in Oakland, CA.