Eat More Potatoes and Go Back to China: The Life of Moon Tung Wong

As a child, I was often confused about the three different names associated with my father.First, there was Fook Gooy Wong, the name on his citizenship papers. Then there was Frank Wong or Frankie as he was known to the customers at the laundry he and my mother, Siu Fong Yu Wong, ran for 40 years in Hollywood, CA. And finally, there was Wong Moon Tung, a name only used by his friends and cronies from Bak Hang Toon, his birth village.

My father was a man of mystery; he held many secrets. He was also fond of imparting wisdom to us in pithy phrases. If you are Toisanese, you’ve probably heard this expression: Heck mo see doy, fahn hong san. East more potatoes (for they are cheap and filling), so that you can save money to retire in China. My father said it often when reminiscing about the hardships of his youth as a wage-slave in America. But it requires tremendous discipline to forgo the pleasures of American life and save every hard-earned dollar from hours of sweat-soaked toil to send back to parents and siblings in the village. The fact that my father did so speaks volumes about his character.

He came to Gum Saan as a young man just as his father and older brother had done. There was not much hope for a bright future in the rocky hills of Toisan where the daily diet of fish heads and vegetables could barely sustain a family. Thus, he left Bak Hang as a 15 year old to find work in San Francisco. After a short stay at the Angel Island Immigration Station, he was landed in 1927. Shortly after his arrival, someone informed on his false family, and my father was taken out of a classroom at Francisco Middle School and detained for a month at Angel Island as he waited to be deported. There, he read the sad poems etched on the wooden walls, and wondered if his brother, who was an artist, might have carved the beautiful calligraphy during his confinement.

Nothing could deter my father from returning to America, so his parents bought him another false paper and on December 13, 1929, under the name Fook Gooy Wong, he was taken to Angel Island with a false brother, who was the true son of Wong Wah, who falsely claimed to have been born in the United States. The immigration authorities were quite suspicious of him because he looked a bit older than the 17 years that he claimed to be. Despite a medical examination that put his age at plus or minus one year from age 19, he was allowed to enter the U.S. after two weeks of questioning. My father had the advantage of actually knowing the false family having grown up with them as neighbors, so all his answers about the village well and furniture used in the school room were spot on. 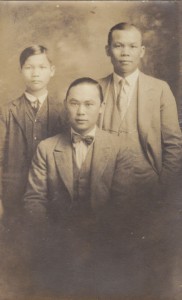 Frank G. Wong, far left, with his brother and cousin in America.

After staying with his false father at his laundry on Larkin Street, Moon Tung aka Fook Gooy went to Oakland to stay in a room above a restaurant on Webster Street.  He visited his uncle, who worked as a cook at a U.C. Berkeley fraternity house.  But fearful that “people talk too much in San Francisco,” Fook Gooy took off for Chicago where his older brother worked at the Hong Kong Noodle Factory.  He settled there, enrolling in night school and took English classes at a church.  There he adopted his third name, Frank G. Wong.

His Chicago years were ones of great change.  He grew from a village boy to a young man. His stories about going to movie palaces on State Street to see a live show and a double feature, and excursions to see the fall colors in Indiana gave me a glimpse of the young man, who freed of parental  constraints could be as stylish as he wanted to be.  He continued to work hard at the noodle factory, hefting 100 pound sacks of flour and making deliveries, but when World War II came, he went to work as a welder in a defense plant where he helped build landing craft.

After the war, he returned to China to find a wife and met my mother, Siu Fong Yu through a marriage broker. After a three-week courtship, they married, and spent a year touring China. Shortly thereafter, the first daughter, Suet Chi or Suzi, was born in Toisan. 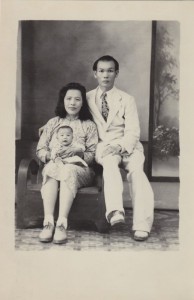 Suzi Wong with mom and dad

By then the Communists were poised to take over China. My father decided to return to the U.S. to raise a family.He decided to settle in Los Angeles and start a laundry business. The entry level was low and although the hours were long, they were not as onerous as ones for cooks, the only other job he had ever held. After sending for his wife and daughter over to the U.S. in first class on the SS President Coolidge, they moved into a laundry in Hollywood.

The next years were all about raising kids and stabilizing the business. In quick succession, three children were born: Edward in 1950, Donna in 1951, and Warren in 1952.  For many years, we lived in the back of the laundry at 6105 Melrose Ave. in Hollywood.  Make-shift beds were constructed out of plywood, and the children took sponge baths in a galvanized steel tub.  As we got older, my parents desperately wanted to find a house near the laundry, but racially housing covenants restricted non-whites from owning a home in Hollywood.  She came home one day in tears after going to inspect a house. I asked her why she was crying, and she said that when the owners saw their faces, they would jack up the price and/or refuse to sell to them. This scene remains the most vivid of my memories of discrimination.  To see a grown woman, who had been a school teacher in China, reduced to tears was searing and sobering. 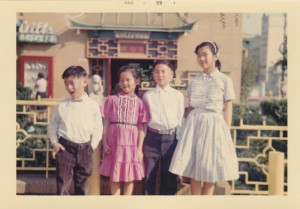 My father’s response to discrimination and insults from white customers at our laundry was alternately sad and frightening. Often, he would adopt a sing-song voice and apologize, but when pushed to the breaking point, he would erupt and loudly, boldly, and violently fling open the counter top and shout, “If you think I have stolen your shirt, come in here and take a look.” His wild-eyed look and bulging muscles would be enough to back any man down. Of course that customer never returned, so he had to choose his battles wisely.

The laundry business grew slowly. My parents went from taking the cash out of the receipt box just to pay the bills to being able to save money and eventually buy a two-bedroom house near L.A. City College. A kindly white doctor didn’t mind selling to Chinese and we broke the color barrier in that neighborhood. Our neighbors were a kindly Lebanese couple and we felt welcomed. It was now 1957, and we were living on the cusp of the Civil Rights Movement, which would smash even more racial barriers. 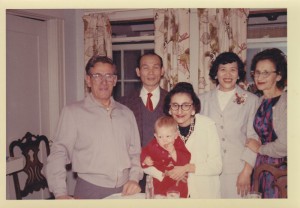 Moon Tung and Siu Fong with the Hassid family.

Throughout our youth, we were warned never to violate any laws and to avoid “trouble.” There were vague hints that we could be deported if we got into “trouble.” Little did we know that my father was an illegal immigrant, who had entered the U.S. falsely as the son of an American-born Chinese. Even the disparaging name assigned to us children, who gee doy/who gee new, which literally means “got paper boy/got paper girl,” should have been a clue, but we had no idea what “papers” meant.

In the early 1960s, we heard mother and father speak in hushed tones with worried looks on their faces. The false brother had confessed to the Immigration Naturalization Service in the amnesty program. My father received notice that he would need to surrender his citizenship and make a confession. My father would need to wait five years to reapply for citizenship and be able to reclaim his birth name: Moon Tung Wong.

By the mid -1970s, all the children had graduated from college, and my mother and father had a chance to take more trips to Las Vegas, see friends, and rest. By the late 1980s, they closed the laundry business and retired. My father spent his retirement years writing a book on how to win at keno. He took daily walks and collected junk. In November 1989, he became quite ill and was diagnosed with cancer and died on February 19, 1990. He was 80 years old. 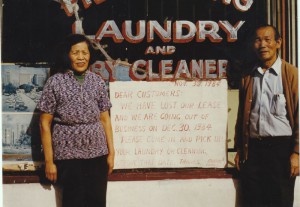 Mom and Dad closed the laundry in December 1984.

As he approached the end of his life, he was at peace. His children were all settled in jobs. He had the satisfaction of playing with four grandchildren, and he had the admiration of many friends. He had come a long way from muddy fields chasing water oxen in Toisan. He had embraced three names, each signifying big changes in his life from illegal immigrant to Americanized Chinese and back to his own true identity. His life was full of discovery and although he could not fulfill his dreams of getting an education, he lived to see his children succeed in academic pursuits. Despite all the challenges he faced, he was determined to find a better life for himself and his family. Because of him, we too work hard and thank him for never stopping in the face of discrimination.

Eddie Wong is the former Executive Director of the Angel Island Immigration Station Foundation. He thanks his mother Siu Fong Yu Wong and his sisters Suzi and Donna and his brother Warren for all their support.

Eat More Potatoes and Go Back to China: The Life of Moon Tung Wong