Andrew Ly: From Refugee to CEO and Winner of the Immigrant Heritage Award 2011

We are proud to share the story of Andrew Ly, who fled Vietnam in the aftermath of the U.S.-Vietnam War, and settled in San Francisco. Through hard work and diligent studies and the support of his entire  family, the Ly family enjoys tremendous success in business with the nationally-recognized Sugar Bowl Bakery brand.  Mr. Ly was the recipient of AIISF’s Immigrant Heritage Award on October 1, 2011.

Named “Most Admired CEO in the Bay Area” in 2007 by San Francisco Business Times, Andrew Ly and his award winning Sugar Bowl Bakery is recognized by the community as one of the leading businesses in the San Francisco Bay Area.  The fairytale success of Sugar Bowl Bakery  comes not only from Ly’s dedication, but with the strong support system of his family who has been there every step of the way.

AIISF honored Mr. Ly in October 2011 with its Immigrant Heritage Award, which is given to individuals and organizations who exemplify the courage and perseverance of immigrants and the valuable contributions that they make to our nation. 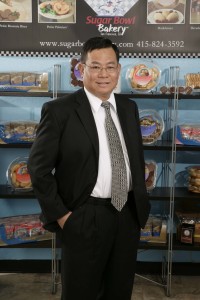 Having to give up his education at the young age in his teenage years (before he entered junior high,) Andrew Ly worked at his parents’ grocery store.  The journey from a small village in Vietnam to San Francisco was filled with peril, perseverance, and hope.

In his initial attempts trying to leaving Vietnam, Ly recall of three failed escapes.  He recalls one of those escapes where a companion was shot to dead in the jungle.  It is after trading in all personal property, such as homes, valuables and assets, the Ly family was allowed to leave Vietnam in 1978.  “We had 143 passengers on a very small boat”, Ly recalls.

Sailing on a small boat that he and one of his relatives built, the Ly family spent an arduous six nights and seven days in the ocean.  The boat was approximately 45ft long, 13ft wide and 23 ft tall.  Everyone had to sit compact with their legs close to body during the entire ride; there wasn’t enough room to lie down.  There were babies on the voyage as young as 6 months old.  Eventually arriving in Malaysia the Ly’s felt somewhat of a relief.  But troubles followed as the Malaysian did not allow anyone on shore.  The Ly family tried to dock three times, only to be pushed back by the villagers and the Malaysian authorities on every attempt.  In one of those push-backs to the ocean, the boat was about to capsize and during that time, they witnessed corpses of those arrived earlier floated on the surface of the ocean.  With being scared and ingenuity the Ly’s came up with a plan.  They would destroy the boat, and swim to shore.

Following their perilous journey, 24 year old Ly and his family lived in a refugee camp in Malaysia. The refugee camp was an uninhabited island when they arrived. They had to cut down trees for firewood, and live in the make-shift tents with cardboard floors.  After 9 months, they finally made their way across the Pacific Ocean.

Assisted by the United States Catholic Charity, Ly arrived in America in 1979, where he had a chance to reunite with his brothers who had immigrated to San Francisco few months earlier.  They lived in one of the most undesirable districts of San Francisco, the Tenderloin for six months in a two bedrooms one bath apartment with nine members in the family.

Ly’s life in the U.S. began with struggles.  With only an elementary school education from Vietnam and no English language skill, Ly had to take any odd job he could find and tend to his retired parents, who were in poor health.

Determined to succeed in this new home country, Ly devoted his time to return to school and get the education necessary.  Ly tells us, “I had to go to ESL for about a year, after which point I went onto City College of San Francisco where I spend another 3 years  than continued onto San Francisco State University to complete my final 2 years”.

The early years were extremely busy but productive for Ly.  In 1984, Ly and his four brothers pulled together their savings of $40k and purchased a small coffee shop located on Balboa Street in San Francisco named Sugar Bowl Bakery.  The entire Ly family worked at Sugar Bowl; each working hard to advance.  “The gross sales came out to about $300 per day back in those days,” Ly states.

Ly recalls, “My family worked very hard and we had to save every penny. We did not take vacation; we did not spend money anywhere unnecessary.  We shopped at Goodwill for furniture and clothing.  I continued to wear clothes from Goodwill for 10 years”. It was during this time that Ly met his wife who was enrolled in an Asian American Studies course at San Francisco State University along with Ly.

Ly fondly recalls, “I remember she decided to change all my old clothes by throwing it away (the clothes from Goodwill), what a blessing!”

By 1986, Ly earned a Bachelor’s degree in financial accounting and was immediately offered a job by a government agency. Despite the offer, Ly decided he would stay back to help his parents and help grow the family business with his brothers and sister-in-laws.

His decision to give up his own career once again and work toward the family business would be well rewarded. In 1987 the family gathered their savings of $90k. “My brothers wanted to buy an apartment because in the Chinese tradition owning property is always right thing to do” Ly explains.  “Our investment quickly expanded and resulted in the opening of a real estate division for our family later on called Ly Brothers Investment Company by purchasing this piece of real estates and also the expansion of Sugar Bowl Bakery.”

Ly’s strategy for success is, “Always work hard; try to make sure our business improves each day, month and year.  If you do what you love, and love what you do, do it right, do it well, do it better and try to be number one in hat space, you will eventually become successful”.

Maintaining a good working relationship with his family has played a major role in achievements.  He explains, “In the Chinese tradition, the oldest dictates what should be done, but I wanted to talk with my family members and convince my brother about this new land, new country and new opportunity.  We had to make sure that we worked together and anyone who had the best idea would win…of course in a family of 5 brothers and 5 sister-in-laws, you have difference in opinion.  When you have a heated exchange, you have to walk away and drink a glass of water, then come back and talk it over, and that how we dealt with difference in opinions”.

With this formula and collective effort of the Ly family, Sugar Bowl Bakery continued its expansion by adding a wholesale division.  The big breakthrough came in 1993 when the hotel industry in the Bay Area wanted to outsource their bakery needs.  Taking advantage of this opportunity; the Ly’s build a larger plant called Sugar Bowl Bakery Wholesale Division.   After which, the products were made and delivered to most of the hotels and hospitals within the Bay Area. The wholesale division made over 300 hand-crafted quality bakery items, like fresh croissants, danishes and muffins.

Today, Sugar Bowl Bakery has surpassed its modest $300 profit per day and is doing approximately $40 million in annual sales.  Their Madeleine’s, Petite Palmiers, and Petite Brownie Bites are enjoyed in the U.S., Canada, Mexico, Philippines, Japan and other parts of Asia.  Ly’s future plans are to build another plant and expand the presence in the East Coast.  Ly states, “By building a plant in East Coast, Sugar Bowl Bakery can make a difference by been environmentally friendly, thus by cutting the trucks that carry our products cross country”.

We Are All Immigrants

Despite his success, Ly has not forgotten his roots or his struggles as an immigrant to the U.S.  He believes this country is basically made up of immigrants.  Ly reminds people, “Some of us are very successful, and many of us are not. Immigrants are working for minimum wage or having troubles finding a job…lots of children can’t afford to go UCLA or UC Berkeley. But people outside don’t know of these struggles”.

Ly works to bring awareness to some of the problems that new immigrants face.  “I try to be active because I am an immigrant and I know about these issues; we joint efforts with others to raise funds and bring awareness with others to help people.  To make sure they have some kind of help to send their children to better schools or least get in school for education”. He serves on the board of Asian Pacific Fund, a Community Foundation with other community leaders.

He is also an advisory board member of the Asian Pacific Islander American Public Affairs Association (APAPA), Ly advocates for active citizenship.  “We mobilize Asian people to bring civic awareness to them and that we have the right to vote.  We have the right to make sure that the government knows that we contribute to this country equally like any other group. We need to exercise our rights to have our voice and needs heard”.

Ly’s dedication to education and civic duties are also visible at home.  He teaches his children the importance of family, community, and history.  “We sent our 21 year old son back to China and Taiwan for the last 4 years… to a very remote village to teach underprivileged children English.  He had many mosquito and spider bites, but he stilled because someday he may be able to contribute and help the poor.  He witnessed the village didn’t have running water, food like we do here. He doesn’t take what he has for granted”. He is scheduled to volunteer to South Africa and India next year in this effort.

His company has continuously worked with other organizations to bring scholarships to disadvantaged students and help to find the cure for cancers.

Ly’s contributions to society extend far beyond his involvement with Sugar Bowl Bakery. Whether one see’s him as a CEO, a community leader, or a father, Ly’s inspiring story is one that many can learn from.  His desire to create change in society comes from his ability to remain as an individual while seeing himself as part of a larger community. His motto for life is one worth remembering, “If you do something for yourself, those things will die with you; but if you do things for others, those things will remain in the world”.

Linda Lau is an AIISF volunteer.  She earned her B.A. and M.A. from San Francisco State University in drama. Linda is currently pursuing graduate studies in drama at Tufts University.

Andrew Ly: From Refugee to CEO and Winner of the Immigrant Heritage Award 2011