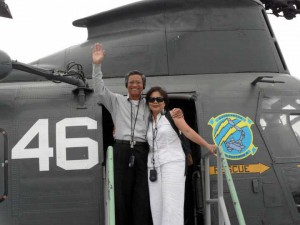 On the 30th anniversary of my first experience with freedom, the bittersweet memory of leaving Vietnam’s prison camp, it seems, took place just yesterday. The date is November 25th, 2010. My family surrounds me and I give thanks for the beautiful display of successful sons and daughters, healthy grandchildren, and an array of oriental as well as traditional Thanksgiving food. All this at the cost of four gold nuggets, I say to myself. I sigh, am relieved, and remember all the individuals who could not afford this opportunity

My name is Thanh Tran. I was born on October 20th, 1949. Today, I am sixty-two years old and am thankful everyday for my home, my family, and my freedom here in America – all of which would not have been rightfully mine if I resided in my home country, Vietnam. Everything was very different prior to 1975 when the Communist won the war and took over. Previously, I had been the youngest of twelve, but the war took with it seven of my siblings. This among other things made reality change overnight; therefore, the events before and after 1975 depict two separate chapters in my life.

In 1972, the U.S. withdrew and by 1975, the Communists were the official victors. On March 28th, 1975, the Communists began invading Da Nang. At midnight, they entered my home, asked my name, blindfolded and handcuffed me. That night, I was certain it would be my last. I was taken to the burial pits where other soldiers had been killed. Many ex-soldiers were there. We waited, but fortunately nothing ever happened. They had done this to avoid southern riots due to their victory. When they released me, they said that they would return in a few months to take me to the prison camp. I would be serving three to five months. This was my punishment for being in the opponent’s army.

When we were released, we weren’t the only ones. Neighboring camps had also discharged prisoners. We had no money, food, or belongings. Nothing was arranged for our departure. The walk home would have taken me four days, but fortunately, there were rescue helpers from the city waiting at the bottom of the mountain for us. Two of us caught a ride to Da Nang with one of the rescue helpers. On our way back, we stopped at a local restaurant and had a bowl of pho and a cigarette in return for our clothes and hat which they could use as work attire. We would be home soon so we didn’t need it. When I arrived home that night, my wife and children were asleep. From there, it was a beautiful blur of emotions and tears.

Immediately after my return, I knew that I couldn’t stay in Vietnam because, although I had been dispatched from the large prison camp, I still had three years of probation under my city’s jurisdiction. This went for all those who came from prison camp.  Furthermore, I knew I wouldn’t be able to live a fulfilling life here. Because of me, my kids would not be able to go to school or have a job. My kids had no future in Vietnam. The Communists will do anything in their power to suppress me and my family. I had to do this for myself, my wife, but most of all, my kids.

I devised a plan using my neighbor’s boat. Thanh also had been in prison camp and wanted to leave Vietnam. It would be a dangerous trip. The Communist had mentioned that if I tried to escape and they caught me alive, they would kill me. I was the one who did the wrong, they forgave me, but I wasn’t scared. I wrote a plan for both families to escape the country. My wife and I had four kids by now. Thanh had ten kids and his parents. Others from the city also joined and paid for much of the expenses. In the military, I was very familiar with how to use a compass and map. Our trip would require two stops: the first at the first island of China, and the second, Hong Kong where we would have to wait for our immigration application to be approved. This would take us approximately one week if everything went well, but we could never be sure. Many times, the weather, waves, and storms killed many people or have stranded families for weeks or months.  We had to prepare as if we would be out there for a month.

June 1981, we had set out by boat at two in the morning. China took two days and one night and Hong Kong took another day and night. Neighboring countries were very hospitable to Vietnamese refugees.  We were very lucky that the waters stayed calm for us. Everyone slept a majority of the time. The kids began getting sick, but we quickly found remedies when we reached our destination. In Hong Kong, we had to wait six months to see which country accepted our application. In the meantime, I picked up a few odd jobs and slightly learned the language enough to get by. Six months later, we were accepted to Atlanta, Georgia, but our flight was to San Francisco first. I had a nephew, Dinh in Monterey and had asked to stay in California, but could not. We had to continue onto Georgia and were given enough money to take the bus back. The bus ride took four days. We carried just two suitcases and one handbag which consisted of things we would need, clothes, camera, radio, and toys for the kids. When we reached Monterey, Dinh picked us up from the Marina. This would be the start of a new beginning.

Right away, I did all my paperwork and went to adult school to learn English. I rented an apartment with government help and had another daughter. Eventually, my family relocated to Oakland on 66th Avenue during the 1989 earthquake. Resources and references were more easily attainable here because of the growing Vietnamese population. I did newspaper delivery as my first job. I have since then worked at the flea market, cement industry, and landscaping which I continue to do today. My wife has always stayed home to take care of our kids. Through the years, we have raised ten lovely children on our own. We never planned to have ten. They were accidents, but I am happy and blessed for each one of them.

Today, I am happy especially because six of my children have received their college degrees. They are healthy, successful, and have equal opportunities to achieve great things. I just want them to know how blessed they are to live in this country, to be free with the ability to choose their own religion, career, and have their own opinions; a place where justice is given to those who do no wrong and the ability to live in sync with their own ideals and self righteousness. They have the freedom to explore new places and experience new things. There is a lot to be thankful for and I am thankful every day for this opportunity which has been blessed to me. They said that I would be in prison camp for thirty years. Well it’s been thirty years since I have been released and I could not ask for more. Four gold nuggets were my answer for everything that I am thankful for today.