Two Korean Women and a Child at Angel Island 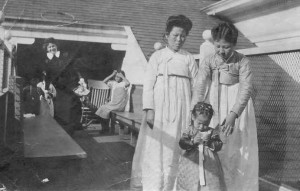 There were no more than 1,000 Koreans among the half million immigrants who sought admission through the port of San Francisco between 1910 and 1940.  Fleeing a harsh life in Korea under Japanese colonial rule since 1910, most were young men claiming to be refugee students, but there were also picture brides, wives, and children of Korean alien residents.  To circumvent the Japanese government’s ban on Korean emigration, many had to steal across the northern Korean border into Manchuria and make their way to Shanghai, where they could book passage on an American steamer going to the United States.  Some were lucky enough to secure Japanese passports that allowed them to travel directly to the United States.  Among the lucky ones was three-year-old Rose Park.

I found her in the only picture we have of Koreans on Angel Island, showing two Korean women and a child dressed in traditional clothing on the rooftop of the Administration Building.  I later found out from Sonia Shinn Sunoo’s book, Korean Picture Brides: A Collection of Oral Histories, that Rose was the little girl standing in front of her mother Anna So Sa Im and stepsister Wanda Kyong Park.  A larger picture in the possession of the Paik family shows Deaconess Katharine Maurer with three other children to the left of the Korean trio.  Women and children were housed on the second floor of the Administration Building and allowed out onto the adjacent rooftop, where they could hang their laundry, play on the swings, and enjoy the fresh air and sunshine.

According to their immigration case files, little Pok Yun Sun arrived in San Francisco from Yokohama on March 12, 1914, with her mother, stepsister, and stepbrother Pok Tong Khan (John Tong Whan Park).  All held the required Japanese passports.  But traveling without an adult male and without any money, they were suspected of being LPC (likely to become a public charge) and were thus taken immediately to Angel Island for the medical examination and interrogation.  Im So See told the Board of Special Inquiry through interpreter David Lee that she had married Park Kyung Soo, a widower with two children, five years ago in Seoul, and that they were going to join him in Idaho, where she planned to “keep house” and send the children to school.  When asked why it had taken them so long to get their passports to come, stepsister Kyong Whan explained, “The government takes a census and we had to wait until they found our names on the census and we had to be examined physically, and that took about 12 months.” As other Korean immigrants had testified before, such delays in issuing passports on the part of the Japanese government were common and intended to discourage Korean applicants. But evidently, the Park family persisted.

Compared to the long stays and intensive interrogations that Chinese immigrants were subjected to at Angel Island, Korean immigrants had an easier time.  Rose’s mother, stepsister, and stepbrother were only asked a total of thirty-four questions.  Park Kyung Soo (Rose’s father) was asked forty questions about his immigration and financial status. He told the board that he first immigrated to Hawaii in 1905, then to San Francisco a year later. His answers regarding his first wife’s death and his remarriage in 1910 aligned with those of Im So See. But the board was not convinced that he actually owned a house and farmed on nine acres of leased land near Boise. They decided to defer the case and detain the family on Angel Island until evidence could be produced. Only after they received a telegram from the postmaster in Mountain Home, Idaho, stating, “Park Kyung Soo fully able to support family, owns town lot, has leased small farm,” did they admit Im Soo See and her stepson Tong Khan on March 23, eleven days after their arrival.  Because Kyong Whan had hookworm and Rose had the measles, the two girls had to stay at the hospital for treatment and were not admitted until April 6. Still, they had all managed to pass the double test of proving their family relationships and Park’s qualifications to sponsor and support them—no mean feat in order to enter through the Angel Island gateway to America.

Sixty years later, in an interview with Sonia Sunoo, Rose explained why the family chose to come to America: “Japan took over and we were able to get away.” She said her father was a bartender in Mountain Home, Idaho, at the time and the family initially farmed in Fairview, Oregon. The eldest of eight children, Rose lost her mother, who died in childbirth when Rose was fourteen years old.  Soon after, the family moved back to Idaho to farm, growing beans, corn, potatoes, and strawberries.  “In a farm family,” Rose told Sunoo, “we all had to work, work, work!  I was used to driving horses and pitching hay.”  Their house did not have running water or an icebox.  The family sold whatever they grew and subsisted on turnip kimchi and rice in water.  Although it was hard work, Rose said she still preferred farm work to school. 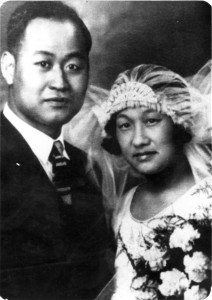 When she turned seventeen, Rose agreed to an arranged marriage with Paik Meung Sun, a farmer’s son. “You grow up with the idea in your head that they will marry you off,” she said.  “He looked all right to me.”   Then laughing, she added, “He said, ‘Gee!  She’s my gal.’  That’s what he told me.”  According to Meung Sun, “She was just what I wanted.  She was young, attractive and healthy.  And she was willing, so we got married immediately…in a few days.”  The couple went to live and farm in Utah with Meung Sun’s family.  They had five daughters and a son.  In 1941 they decided to move to Los Angeles, where Meung Sun worked first as a salesman for Jan-U-Wine, a canned food company, and later as a shipping clerk for Quon Quon, importer of baskets.  Rose found work in a garment factory downtown and later worked as a file clerk at the Continental Insurance Company.  Widowed in 1982, Rose passed away in 2000 at the age of eighty-nine.

Meung Sun and Rose made sure all of their children had a good education.  Their eldest daughter Helen majored in math and worked for the space program; second daughter Alice worked for a law firm; third daughter Ethel retired from Amgen, a biotechnology company; fourth daughter Margaret graduated from UCLA and married a Baptist minister; fifth daughter Nora retired from the Bank of America; and their son Irvin got his Master’s degree from UCLA and became a film editor at Universal Studios.

Two Korean Women and a Child at Angel Island