The Only Chinese in Town: An Appreciation of Frank and Grace Jung 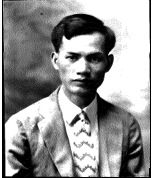 John Jung was born in Macon, Georgia, to Chinese immigrant parents who operated a laundry before the civil rights era. Growing up in the only Chinese family in town he struggled to understand and develop his ethnic identity.

After a 40-year career as a Professor of Psychology at California State University, Long Beach, he wrote a memoir, Southern Fried Rice: Life in a Chinese Laundry in the Deep South, to describe what life was like for his family in Georgia. He continued his newfound interest to write three subsequent books, all sharing the same goal of exploring how Chinese immigrants overcame hostile societal prejudices to succeed in family-run businesses. 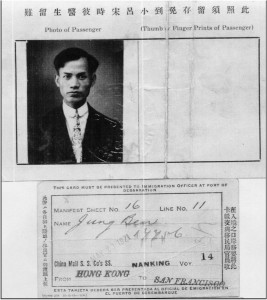 In 1927, my father returned to China for an arranged marriage, as was the custom, to Wai Choi. After a few months, he came back to the U. S. in 1928 with his bride, Quan Shee. During the immigration interrogation at Angel Island, he was confronted several times by the examiner who accused him of giving memorized answers because he changed his answers to several questions in 1928 in exactly the same way that he had modified his first answers to those questions in 1921. (An examination of the transcript showed that he stood his ground whenever confronted and replied that he was just telling the truth). The examiner also made a serious challenge of Quan Shee when she failed to recognize a photograph of her alleged paper father-in-law, someone whom she had supposedly been in daily contact with for several months. 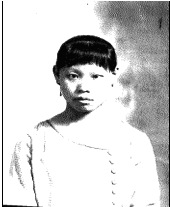 Despite these harrowing challenges, they gained entry into the U. S. They went directly to Macon, Georgia, where they would be the only Chinese adults for the next 25 years. Over this time, Frank and Grace Jung operated the Sam Lee Laundry where they raised a family of 4 children and lived in quarters above their business.

Although cut off from contact with any other Chinese people, they managed somehow to endure with a somewhat fatalistic Chinese philosophy of ‘eating bitterness’ as they endured hardships of the depression of the 1930s and the war years of the 1940s. Laundry work was physically demanding, the hours were long, and during the hot, humid Georgia summers, the heat inside the laundry was stifling. 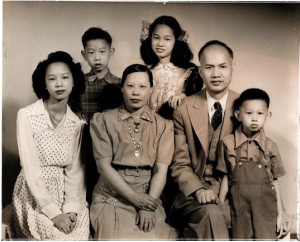 Jung family 1946: Mary, Mother, Father, George in front; John and Eugenia in back.

Only Sunday visits to Atlanta several times a year that took over 2 hours by train to visit a brother, or reciprocal visits to Macon from him, provided us with any social contact with other Chinese. On these visits my father would bring one or two of us. The trips were actually rather boring for us children, but they did give us a change of scenery for a day. We would sit and wait patiently while father and his brother would sit in his laundry and exchange information about other Chinese working in other parts of the South or their families back in China. Sometimes they would visit some other Chinese bachelors in their laundries or at the On Leong Association Hall, and by then it was time to make the long train trip back to Macon in time for dinner. My mother rarely made these trips since there were no other Chinese women in Atlanta, save one, with whom she could socialize. Her life was even more isolated that that of her husband especially since she had no opportunity or time to learn to speak more than a few words of English. She would later recall that she sometimes felt she was forgetting how to even speak Chinese since father was the only adult Chinese in Macon with whom she could converse.

My parents managed to gain minimal information about national and world events that were relevant to Chinese by subscribing to a Chinese newspaper mailed from San Francisco.  Whites and blacks in town viewed them, and our family, with curiosity and occasionally, condescension.  Overall, they were accepted in public spaces, but they did not engage in any social contact with the community. Their children were permitted to enter white theaters and schools. 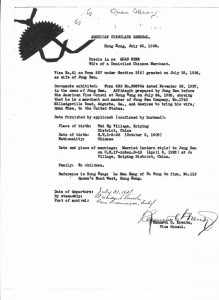 Father’s 1928 Affidavit as Merchant, Re-entry Permit, Marriage and Intent to Bring Quan Shee to U. S.

Interestingly, my father did not ever discuss his experiences with immigration barriers or racial prejudice with us whereas my mother went to great lengths to continually tell us about the unjust restrictions on Chinese immigration, the mistreatment and detention of Chinese at Angel Island, and the dangers of racial discrimination in the South.  She complained bitterly about her Angel Island experiences where she was detained for over a month. As a child, I tended to think she must have been exaggerating but as an adult, I learned that she had been quite justified in her feelings.

The lack of contact with any Chinese community or culture led my parents to decide to move the family, in stages, to San Francisco around 1950 when the oldest child, Mary, graduated from high school.  They wanted their children to attend college where they would have opportunities for social contact with other Chinese rather than remain isolated in Georgia. Their sacrifices through hard work in the laundry made it possible for their children to enjoy more fulfilling lives.

My father stayed alone in Macon to operate the laundry for about 4 more years to support the family before he could retire to join his family in San Francisco. My parents then enjoyed many years living near Chinatown and reconnecting with familiar Chinese culture and customs after being deprived of such opportunities for a quarter of a century.

The Only Chinese in Town: An Appreciation of Frank and Grace Jung