The Story of Gain Fong

Granddaughter Cindy Sue describes the life of Gain Fong, who emigrated from Canton at age 15 in 1917.  Like many immigrants, Mr. Gong began his stay in the U.S. as a laborer and eventually saved enough money to start a grocery business in Castro Valley, California. His legacy endures through the values of hard work, sacrifice, and education that he instilled in his children and grandchildren.

My maternal grandfather, Gain Fong, immigrated to California at the end of World War I at the age of 15 from the village of Ho Choong in the Canton (Guangdong) province of China to join his father who was already there. He brought with him three items which I still have: a metal can, a metal canteen, and he wore a shirt with the Chinese character for “courage” written on it. He spent two difficult and humiliating weeks at Angel Island, the “Ellis Island” for Asian immigrants at the turn of the century. For an intelligent, self-sufficient person like him, being treated like a “prisoner” or “an animal” as he described it, was very difficult. Whenever he recounted his experiences at Angel Island to me, I could hear the bitterness in his voice and see it on his face. He told me that the Irish and the Italians were the most prejudiced, especially the Italians.He initially worked in the fruit drying industry, one of the few industries available to Asian immigrants. He told me there was much racism against the Chinese. For instance, there were areas where Chinese were not allowed to reside; there were barbers who would not cut a Chinese person’s hair. As bad as the treatment was against the Chinese, he told me blacks were treated even worse. 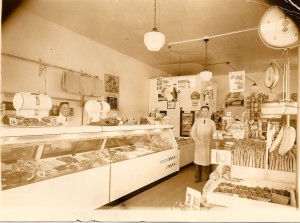 Immigration policies at the time were so stringent and unfair, that he had to work to obtain enough money in order to bring his wife and first child, Florence (my mother), to California. In doing so, he helped operate a successful market in Oakland. The business was lucrative enough to bring over his wife and child in 1948. My mother met her father for the first time when she was twelve years old. It was at this time that he and my grandmother had two more children, Howard and Herbert (my maternal uncles).

In the late fifties, he made his way to Castro Valley where he ran his own grocery store and had another child, Dick (my youngest maternal uncle). This business enabled him to eventually bring over his stepmother from China as well as put his four children through college and set himself up for a comfortable retirement. 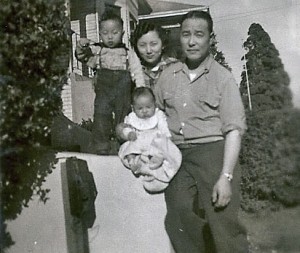 My grandfather had always yearned for education for himself but due to economic and societal restraints, was unable to become educated so he put all his hopes on his children, grandchildren, and great grandchildren. He always used to tell me to get as much education as I can because many things can be taken from you, but no one can take away what is in your head. So his hopes were fulfilled through his children and grandchildren who have all received college degrees and work as professionals. His oldest great grandchild will attend college this fall.

My grandfather achieved despite many impediments. In the realm of human accomplishments you can only view his life with admiration and respect. The courage and fortitude of immigrants in his generation made it possible that we as second, third, and fourth generation Americans may reap the benefits of their hard work. My grandfather’s legacy lives on in all of us.

Heeding my grandfather’s advice, I obtained as much education as I could. I have a Bachelor’s in Sociology with a minor in Gerontology and a Master’s in Special Education from the University of Santa Clara as well as a Master’s in Social Work from San Jose State. I live in Mountain View and work as a teacher as well as an adoptions social worker. I am also the mother of my grandfather’s oldest great grandchild who will start college this fall studying pre-med. – Cindy Sue

The Story of Gain Fong