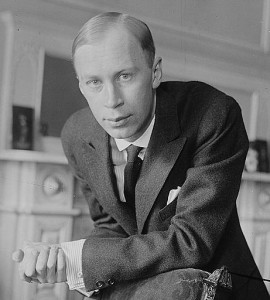 When Serge Prokofiev sailed into San Francisco Bay passing the Golden Gate on August 21, 1918, he had entered the United States as an émigré having traveled from Russia on the Dutch ocean liner S.S. Grotius. Immigration would take him from where life was “becoming sour” to America “where life was in full swing,”  thus, escaping “slaughter and wildness” for  a “cultural life.”  That bright promise prompted Prokofiev to declare in his diary in 1917 “…there New York and Chicago. No hesitations –  in the spring, I am going.”

Prokofiev’s voyage from the old world to the new world required that he first complete a 17 day Trans-Siberian rail trip. Despite the composer’s musings of heading for New York or Chicago in his 1918 diary entry, his original travel plans were to sail to Buenos Aires in Argentina. To that end, while traveling across Russia by train, Prokofiev occupied himself by  studying Spanish and imagining the pampas of Argentina. Arriving in the eastern Russian seaport city of Vladivostok, Prokofiev obtained a Japanese visa and boarded a ship bound for Tokyo. Upon arriving in Tokyo, Prokofiev discovered that sailing to Argentina would not be possible for another two months.  With repeated delays and limited success in replenishing his cash at each stage of this travel, Prokofiev debated between “America” Or India?” as a final destination. In the end, Prokofiev decided upon America.

Prokofiev’s journey across the Pacific would follow a route that would be familiar to many of the 19th and early 20th century immigrants who entered American through San Francisco by way of Angel Island’s Immigration Center. From Tokyo and Yokohama he sailed to his next stop in Honolulu. From Honolulu, the final stop by ship would be San Francisco and its Golden Gate. After arriving in Honolulu, and after much self-induced delay, Prokofiev applied for an American visa and it is granted to him in a short two and a half weeks.

From Sergey Prokofiev’s autobiography  one can catch glimpse’s of the composer’s initial impressions of his new county.

“As the mist began to dissipate, the beautiful outlines of the bay began to show themselves. From somewhere came the sound of a bell, not from a church but from foghorns. I did not, of course, expect this to be a place to look for picturesque landscapes, or castles, or legends. This was a country of miraculous comfort, of gold dollars…”

When Prokofiev journeyed to America in 1918, he was one of approximately relatively small number of Russians who were able to immigrate to the United States in period of the years after 1917 to before the end of WWII. In this period there was huge drop in the number of immigrants from Russia when compared with historical figures. Approximately 3 million Russians immigrated to the US from the late 19th century to the end of the 19th century. Yet, from 1917 to the end of WWII only 20,000 immigrants from Russia had entered the United States.  A red scare resulting from the communist Bolshevik revolution of  Russia in 1917  had the effect of tightening Russian immigration.

When Sergei Prokofiev journeyed to America in 1918, he was one of a relatively small number of Russians who were able to immigrate to the United States in the period of the years after 1917 to before the end of WWII. In this period there was a huge drop in the number of immigrants from Russia when compared with historical figures. Because of the Bolshevik Revolution of 1917, all Russian immigrants were being suspected of being Bolshevik agents and closely scrutinized by immigrant inspectors.

Once the S.S. Grotius is docked in San Francisco bay, small boats flying the American flag pulled up and a medical inspection and police investigation of passengers on board commenced immediately. Prokofiev’s initial impressions were highly positive and it is largely a positive outlook that Prokofiev had of his entire experience of passing through immigration controls.  Prokofiev recorded his observation in his diary that,

“There is great fear of German spies and Bolsheviks coming from Russia.”

“Our group was obliged to undergo yet another interrogation, to show our letters, papers and so forth….Police questioning delayed the passengers for hours…”

An official who had rifled through all of Prokofiev’s musical compositions looking for letters,  told the Russians that they “would all have to be taken to the island” and would in all probability “be released within an hour.”

This would not be so. The slow pace of processing passengers by immigration station officials resulted in all 20 Russian passengers on board not being be allowed on shore on their first day of arrival. To pass the evening Prokofiev’s Russian compatriots ask him to play the piano for them and he obliges them for over two hours. His countrymen are “wild with enthusiasm” and Prokofiev is toasted with champagne. For the generosity he has shown in his impromptu concert Prokofiev earns the appreciation of his fellow travelers and his concerns regarding his finances are perhaps allayed. Being indigent, and without means could be grounds for refusing a European’s passage through Angel Island. Prokofiev  is assured by “one rich Jew” [who] confided to him that,

“should I have any difficulties or need for money, I could appeal directly to him.”

“…three Dutch…four “wealthy Jews; a poor  Jewish family from Romania who did not have enough money with them to be permitted to enter the United States; a Czech…a Greek; and Italian couple named Vernetta…and five Chinese.”

The group is escorted  into a room in a building that has bars. There is a camera there. Prokofiev found the camera to be  “particularly disagreeable” as it as “evidently put there to record the features of everyone brought in.”

Prokofiev observed that the interrogations for his group of passengers began at 11:00 in the morning. First it was the

“rich Jews, who were tormented  for three hours and then released.”

When the immigration reception process ceases at 4 o’clock Prokofiev’s group is told that they would spend the night in the island hospital with interrogation to take place the next day. As a result,

“I really lost my temper: these devils were working a mere four hours a day, and we were having to wait three whole days for them! Going out into the vestibule, I shouted after them in English that such behavior was a disgrace to America!”

As their first evening on Angel Island unfolds, Prokofiev gained an understanding of the experience of other European immigrants at Angel Island.

“All kinds of people had been interned there: an English colonel, a French Consul from a South American country….They had all been very angry, the men cursed and swore, the women wept, …after three days or so they were set free.”

Prokofiev in his autobiography years later described Angel Island in this manner.

“It was a relaxed, unhurried sort of institution, established principally to control Chinese and Japanese immigrants and quite unused to Europeans, who had begun to enter the United States by this route only since the outbreak of war [in Russia]. There was no point in taking offence, the only choice was to sit out the time patiently, especially as the people were polite, the meals provided were acceptable, there was clean linen in which to sleep, and in the evening one was permitted to stroll about the square planted with flowers  and palm trees.”

On Prokofiev’s third day in America he and others in his group were woken at six in the morning.

“…The officials arrived at half-past nine and started by questioning the third of the Dutch trio, then the Greek and then the Czech. The first two were released, but the Czech was interned for further investigation. The Chinese had already been removed yesterday to a special department for colored people where, so we heard, up to forty different Asian and native Australian nationalities were incarcerated. There remained only the Vernettas and I.”

Prokofiev had traveled to the United States as the invitation of Chicago Industrialist Cyrus McCormick of McCormick Tractors. Prokofiev, dismayed at that lack of progress,

“…prepared to telegram McCormick  informing him that I had been arrested for no reason and asking for this help. Tomorrow was Saturday: the officials would be there for two hours and would leave again at noon until Monday. This was becoming intolerable…It was at this point that I got an explanation  which was at least a starting point: the reason the interrogation here was proceeding so slowly was that no report had been received from the counter-espionage questioning carried out on the ship. Without this they were unable to start their own investigations.. The report on me had at last been received today, they would interrogate me tomorrow, and provided I could satisfy them on all points I would then be released. I decided that the reason my report had been held up was because it was taking them so long to go through all the numerous documents, letters and manuscripts they had taken from me on the ship. I composed myself to wait for tomorrow. The Vernettas for their part were highly indignant. What sort of allies are they, to go around arresting us! they cried.”

At ten o’clock on the fourth day Prokofiev’s  was called in by an official and subjected to an hour-long interrogation. Prokofiev was asked questions that he characterized as both “sensible and stupid.” In reading Prokofiev’s account of  his interrogation in his autobiography, if he feared for his ability to pass the interrogation, he did not show it. Prokofiev’s ample attitude in his responses is very evident.

The Angel island immigration process that Prokofiev had declared the day before as becoming “intolerable” had concluded  in Prokofiev’s favor despite much questioning regarding the fact the Prokofiev had only $100 to his name.  Freedom, and San Francisco with its “energy, fine civic appointments, and above all, wealth” was only a short boat ride away.

“After I had been finished with the Vernettas were questioned, and at noon we went together into San Francisco on the same boat as the officials who half an hour before had been interrogating me. Now they were all smiles and offered cigarettes, but I found their ugly mugs so repellent that I went up on deck.”

In the end Prokofiev’s years in America proved only to be temporary. Prokofiev’s entry and access to America which was so easily gained, was just as easily relinquished. As a result, Prokofiev the Russian American immigrant, became Prokofiev the Russian sojourner. In 1922 after four years of composing new works that failed to provide him with a firm financial footing, and that artistically left him ever in the shadow of fellow Russian composer Rachmaninov, Prokofiev moved his family to the Bavarian Alps in Germany, and then eventually to Paris. By 1934, after three return visits to Russia, and after consultations with high Russian officials,  Prokofiev the émigré returned permanently to Stalin’s Soviet Union.