A Profile of Tyrus Wong

by Rosalind Chang, based on interview with Eddie Wong + Jeffrey Chin video 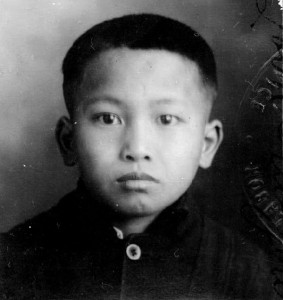 We are proud to present a profile of Tyrus Wong,  a renowned artist and kitemaker, as he prepared to celebrate his 100th birthday in 2010.

Born in Toisan, Guangdong Province, China in 1910, artist Tyrus Wong’s legendary career has included work as a painter, a film production illustrator, a greeting card designer, and a kite builder. He is best known for his contributions to the Walt Disney Studio feature film Bambi, where he created the movie’s visual style.

IMMIGRATION TO THE U.S.

Life in China was hard for Wong Gaing Yoo (Tyrus) and his family.  Meat was only eaten during holiday times. Meals during the rest of the year consisted of fish heads, vegetables and rice.  The shared home was small, with a kitchen area, living room, and loft.  A divider separated the building, with Gaing Yoo, his family, and their chickens on one side, and a woman and her pig on the other. It was decided that the boy would immigrate to the United States, in the hopes of finding better opportunities.  He left his mother and sister, and never saw them again.

Traveling with his father who used the name Look Get and had immigrated as a merchant (a class allowed by the Chinese Exclusion Act), Gaing Yoo immigrated to the United States in 1920 via the ship, the S.S. China.  He immigrated under the name Look Tai Yow. The boy and his father shared a first class room with another man. During the month-long trip across the Pacific Ocean, the young Tai Yow spent his time getting seasick, walking around the ship, observing the American passengers racing each other, and watching Chinese passengers cooking and gambling. The ship made stops in Hong Kong, and Kobe, Japan, but Tai Yow and his father didn’t off-board.

The S.S. China arrived in the United States on December 30, 1920. Upon arrival at the Angel Island Immigration Station, Tai Yow was separated from his father, and held on the island for a standard interview. Because he was young and could climb, Tai Yow was given the top bunk in the sleeping quarters, where it was hot. When he realized he couldn’t complain to his father about the heat, he became upset and cried. This led to Tai Yow’s introduction to chewing gum, as he was given a piece to comfort him by a guard. Instructed to chew but not swallow it, Tai Yow passed time chewing and experimenting with the gum (at one point, he placed the gum on the radiator). Tai Yow also wiled away the time on the station’s swing.  When the lunchtime whistle blew, Tai Yow ran to the lunch barrack, and would eat his meal in the allocated 30-minute time period. As Tyrus recollected, “It was just like jail.”

Tai Yow was interviewed by three U.S. Immigration inspectors on January 27, 1921. A stenographer and and an interpreter were also present at the hearing. Although it felt as if he had been on the island for a long time, Tai Yow’s hearing came relatively quickly, possibly because his father had “slipped something under the table” to the authorities.

Tai Yow’s inquiry hearing included questions about his father, his mother, his siblings, his house, his school and his village.  Father Look Get and brother Look Chy Haon were interviewed in Sacramento, CA on January 18,1921.  Satisfied that Tai Yow was indeed the son of Look Get, U. S. Immigration released the boy to his father, and an identification document for Tai Yow was issued on January 31, 1921.

Although he was an educated man, Tyrus’s father was not able to get an American job in the United States.  Rather, he worked with other Chinese immigrants. Some of his jobs included working as a Chinatown dealer for the Four Seasons, and helping to negotiate for Chinese stores. Once released from Angel Island, Tyrus and his father went to Sacramento. They lived with a half dozen other people at a Rubin House, which was located in an alley. According to Tyrus, “Each family had a tiny room there, and (shared) a community bathroom.”

Tyrus said that Look Get was “…a very very good father.” Education was important to Look Get. He recited and explained poetry to the boy. Knowing that Tyrus loved drawing, his father taught him to paint, draw, and write calligraphy with a brush.  Look Get was a watercolorist; he had Tyrus practice with a brush every night before going to bed using water, a brush, and newspaper (as funds were limited).

After American school in Sacramento, Tyrus attended Chinese school. There was little time for play. His father discouraged him from playing baseball, as he was concerned that the boy would break his fingers and ruin his life. Although his American teacher told him he was a nice and smart boy, Tyrus was only interested in drawing, and indifferent to school, especially despising arithmetic. With his father now in Los Angeles, he skipped school. He received poor marks, and wasn’t able to be promoted. When Look Get received Tyrus’ dismal report card, and had it translated, he immediately sent for the boy. Realizing he needed to keep a closer eye on his son, Look Get arranged for Tyrus to attend school in southern California.

While attending Benjamin Franklin Jr. High School in Pasadena, one of Tyrus’s teachers recognized his talents. He told Tyrus about art school, and how he could attend the school on a scholarship. When Otis Art Institute offered a one-year scholarship to Tyrus, he accepted and became a full-time student. Believing in his son’s talents, Tyrus’ father borrowed money for him to continue his studies at Otis. Eventually, Tyrus was able to attend Otis on a full scholarship.  In his fourth year, Tyrus won a scholarship for being a top student, which greatly pleased his father. 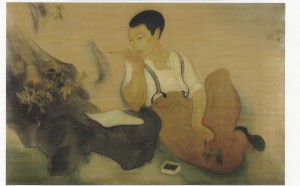 At Otis, Tyrus met and befriended fellow artist Benji Okubo. Along with other Asian American artist friends, Benji and Tyrus formed the Oriental Artist Group of LA. The friends held exhibitions at museums throughout California, displaying their artwork, which combined their Western art school training with strong Asian aesthetics.

Restaurant owner Eddie See commissioned Tyrus and Benji to create murals for his Los Angeles Chinatown restaurant and club, the Dragon’s Den. Benji painted the floor and flowers, and Tyrus painted the Eight Immortals and a dragon on the walls.  When the job was completed, Eddie asked Tyrus to work as a waiter at the Dragon’s Den. Knowing he would need more help, Eddie asked Tyrus to contact Ruth Kim, a young lady who worked at a local Chinese drug store (and who had previously turned down Tyrus’ offer to buy her an ice cream). Ruth accepted the offer, and they worked together at the Dragon’s Den for a few years. They began dating, going to movies and live shows, and eventually married. Together, they had three daughters.

Tyrus graduated from Otis in 1935 at the top of his class. During the Great Depression, he participated in the Federal Arts Project, a branch of the Roosevelt administration’s Works Progress Administration. He created two paintings a month, for exhibition at public libraries and government buildings. 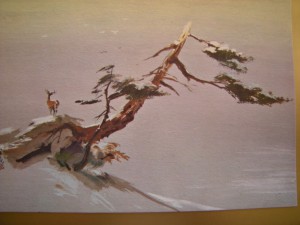 In 1938, Tyrus was hired by the Walt Disney Studios, working on animated shorts as an “in-betweener.”    Hearing that the studio was in pre-production for the feature film Bambi, Tyrus painted and submitted several striking landscape paintings with deer. The paintings caught the attention of Walt Disney, who was intrigued by the mysterious quality of the sketches. Walt wanted a different look for the movie, and Tyrus’ sketches became the basis for the film’s visual style. Instead of focusing on minute details such as tiny flowers, branches, and logs, Tyrus kept things simple, creating the atmosphere and the spirit of the forest. His study of Chinese art inspired him to draw with simplicity. It was a revolutionary concept, and worked well for the film. In 2001, Tyrus was named a Disney Legend for his contributions to Bambi.

Tyrus left Disney Studios in 1941, and joined Warner Brothers in 1942.  At the studio, he worked as a production illustrator and sketch artist, painting pre-production art for many live-action films, including Rebel Without a Cause, Calamity Jane, Harper, The Wild Bunch, Sands of Iwo Jima, Auntie Mame, April in Paris, and PT 109. He was also loaned out to different studios.  During slow times at the studio, Tyrus also worked with his uncle at a ranch, picking tomatoes and asparagus.

The relationship between the Warner Brothers employees and management wasn’t always amicable.  While employed at the studio, Tyrus once chose to strike along with his fellow co-workers. He landed in prison for the evening, along with other strikers, reminding him of his time on Angel Island.  It was a sleepless night in jail for Tyrus, as his bunkmate (the head of the strike) snored.

During an interview in February 2010 conducted by AIISF’s then-Executive Director Eddie Wong, Tyrus was asked what he was most proud of in terms of his varied artwork. He replied, in terms of commercial success, he is proud of his Christmas card designs for Hallmark. He is also proud of the paintings he sold to individuals through the years. 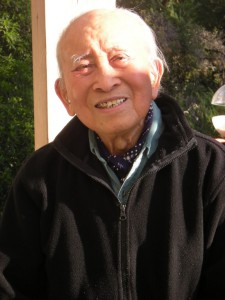 After retiring from Warner Brothers in 1968, Tyrus pursued another art form – designing and building hand-made kites. He has taken these beautiful kites and flown them on the beaches of Santa Monica, by the Pacific Ocean. It has been quite a journey for Tyrus, one that started ninety years ago when he left China and crossed the same ocean to begin a new life in a strange country. Since then, he’s made friends, married and had a family, and excelled in his chosen profession by creating and winning numerous awards and recognition. 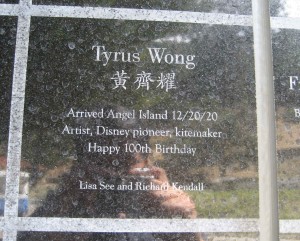 Tyrus’s plaque at Angel Island, a gift from his friends Lisa See and Richard Kendall

On October 25, 2010, Tyrus celebrated his 100th, another milestone in a legendary life.  From your new and old friends and fans, Happy Birthday, Wong Gaing Yoo – Tyrus Wong!

Please view this short video by Jeffrey Gee Chin about Tyrus Wong’s life. It was also shown at a special exhibition about Tyrus’s life at the Walt Disney Family Museum in San Francisco in 2013-14. The exhibit was also on tour at locations including the Museum of Chinese in America in New York City.

We’re sorry to pass along the news that Tyrus Wong passed away on December 30, 2016. Tyrus’s obituary ran on page one of the New York Times the next day. National Public Radio also broadcast this story. Thank you, Tyrus, for sharing your art with the world.

Rosalind Chang is a retired children’s librarian and branch manager with the San Francisco Public Library. She currently conducts workshops in arts and crafts along with volunteering for AIISF. She lives in the San Francisco Bay Area.

A Profile of Tyrus Wong