A Champion Through Education

Through his hard work and commitment to striving for the best in education, David Campos is now a member of the San Francisco Board of Supervisors representing District 9.  Yet, Mr. Campos came from humble beginnings. The following  article examines David’s life and journey from Guatemala to America as an undocumented immigrant and explores how his experiences shaped his views as Supervisor today. 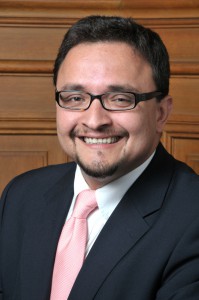 David Campos was born in Puerto Barrios, Guatemala in 1970, but because of the deteriorating political situation and increasing violence there, his parents brought him to America at the age of 14 along with his two younger sisters as undocumented immigrants. His parents also wanted better economic opportunities for everyone in the family. They settled in South Central Los Angeles where Mr. Campos attended Jefferson High School.

The struggles that Mr. Campos faced growing up in America were similar to other immigrants. His family had to struggle to make enough money for basic needs, e.g. putting food on the table and providing a roof over their heads. David’s big obstacles were not knowing English when he first arrived and having to assimilate culturally. He eventually overcame these difficulties and excelled in school. He attributed his success in school not only to all the hard work he put in to studying but also to a mental attitude that came with him from his native Guatemala.

The benefit to being an immigrant, according to Mr. Campos, was having a different perspective and value system from the emigrant country. In Guatemala, it wasn’t a big deal or rare that Latinos went to college or sought higher levels of education, whereas in America, there still is an achievement gap among Latinos. In Guatemala, he was not a minority race, and even though coming America meant that he was now a minority, he mentally did not consider himself one. This pushed him to work hard in school because he knew he was equal in ability to any of his classmates, regardless of race. To Mr. Campos, anything was possible with enough dedication to educational achievement.

Education is the Key

All that hard work in high school paid off as David soon attended Stanford University with scholarships. Applying to Stanford was a tricky process at first though. There was a possibility that if David was ever caught as undocumented, he might have been sent back to Guatemala. Because of his undocumented status, David was treated as an international student at Stanford. During his 2nd year at college, he applied for legal status through a job he held at the time. In 1993, Mr. Campos graduated with a B.A. in Political Science.

With undergraduate school completed, Mr. Campos went on to Harvard Law School. There he became a permanent resident. After graduating in 1996, David worked for the City Attorney’s office. He also served as General Counsel of the San Francisco Unified School District and as a member of San Francisco Police Commission. In 2008, Mr. Campos was elected to the San Francisco Board of Supervisors.

As a current member of the San Francisco Board of Supervisors, Mr. Campos exercises considerable influence over law making and public policy. One contentious issue today is the debate over immigration reform. Mr. Campos understands the perspective of an undocumented worker or immigrant person having been undocumented himself. “Often times, you don’t hear that voice in the debate,” says Mr. Campos. He notes that most immigrants strive for a better quality of life. “They don’t want free rides but to instead play by the rules and work hard to succeed,” added Campos.  Just like Mr. Campos, many immigrants are driven entrepreneurs, and that influx is good.

Mr. Campos is worried that the immigration debate today is history repeating itself. The marginalization of immigrants by some is reminiscent of the discrimination faced by prior immigrant groups, such as the Irish, Chinese, and Japanese, to name a few, according to Mr. Campos. He is working to create a better dialogue in this debate and has worked specifically towards creating more services and support for immigrant youth in San Francisco.

Mr. Campos sees education as paramount to improving the lives of immigrants. “There has to be a support network created to encourage them,” said Campos. “Some immigrant children don’t see themselves as doing anything great in life, but that can change by instilling a sense of self-determination via supportive parents and teachers,” added Campos. Mr. Campos sees this as the “power of expectation”, where children are expected to perform well in school and anything less than a diligent, sincere effort is unacceptable. It was this expectation, which motivated Mr. Campos to excel in school to lead him to where he is today.

Though the Campos’ family history does not involve Angel Island, he still feels connected with the place. To him, Angel Island, like Ellis Island, represents the “promise and spirit of America”, which embodies the notion that hard work and perseverance lead to success. His narrative also is a testament to the enduring spirit of the immigrant voice of America.

A Champion Through Education