From Vienna to Angel Island 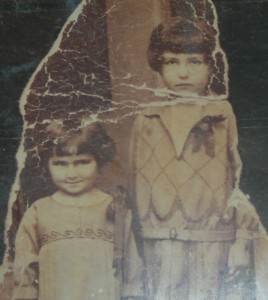 For many years Lotte Loebl Frank didn’t want to talk about her ordeal. The memories were too painful. She and her family had escaped occupied Europe in 1940 along with a few hundred other Jews who crossed the USSR, China and Japan – ultimately arriving at Angel Island.

“I never wanted to be interviewed or anything,” she says. But she shared her story publicly for the first time with Eddie Wong, executive director of the Angel Island Immigration Station Foundation after she read Eva Schott Berek’s story in the J, the Jewish weekly of northern California.

Loebl stares at a photo cracked with age showing two girls with Dutch boy haircuts standing in front of a house in Vienna. Lotte was 12 and her sister Herta was 15. That’s where her story begins.

Nazi Germany invaded Austria in 1938. The fascists fired Jews from their jobs and confiscated their businesses. Lotte’s father Ludwig Loebl was a tailor whose clothing factory was seized.  “The people who worked for us came in with Nazi uniforms,” recalled Lotte.  “They said, “Jew, get out of here.  I’m taking over now.”

That night the eight members of the Loebl family piled into their company’s bus and the chauffeur drove them to Vienna where they stayed in the chauffeur’s small apartment.  Mr. Loebl worked in a Jewish soup kitchen just to survive. Lotte and her sister weren’t allowed to attend school.

The family couldn’t even go shopping for food. “You were afraid to walk on the street,” remembers Loebl. “They would pick you up and kill you.”

For two years, the Loebl family lived a hand-to-mouth existence, receiving small food packages from family members and left-overs from the soup kitchen. 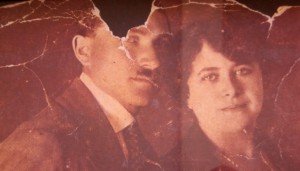 For a brief time from 1940-1, Jews were able to escape Germany and occupied Europe by taking a train eastward. The shorter routes via Western Europe were forbidden. But the trip required visas to enter and exit each of the countries on the eastern train route, and most importantly, a visa from the United States. For that, they needed a sponsor. Loebl’s parents had a friend in the U.S. and wrote to ask for help. “The woman was generous enough. But she and her husband had just a little mom and pop grocery store.” The U.S. government didn’t consider that sufficient to sponsor a refugee family, so explains Loebl, “We had to write to my cousin in New York. He asked his boss and some other people to sponsor us.”While they were wading through the U.S. bureaucracy, the family learned that Lotte and Herta were accepted for the Kindertransport, a program that took Jewish children from occupied Europe to live in Great Britain. But the program was for children only; parents couldn’t make the journey.

“Being that we had some of the papers already to come to America, my father [Ludwig] said ‘let’s just wait and see if we get the other papers and the family will go together.’ And thank God we got the papers. It took a long time.”

Ludwig Loebl kept his overcoat and toothbrush by the door, expecting the U.S. visa to be granted any moment. “He saw them picking up all the Jewish men off the street and putting men in buses. One day, they came to the apartment that we lived in and knocked on [other] people’s doors. They missed our door and my father was saved.”

An aunt who lived with the family was not so fortunate. She was picked up and later died at the Buchenwald concentration camp. In a post-war visit to Austria, Loebl confirmed the death of her aunt and uncle and two cousins from records kept by the Nazis.

“I saw their names. All four of them were killed.” 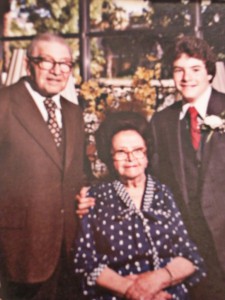 In August 1940, Lotte, her parents and sister finally got all their visas. They boarded a train in Vienna that took them half way around the world. For a fee, a Japanese steam ship company arranged for train tickets that took the family and other Jews through Germany, the USSR, China and then to Yokohama, Japan. They boarded the Rakuyo Maru and stayed in steerage on the lowest deck of the ship.

Loebl has one happy memory from the trip. In Hilo, Hawaii, the Hebrew Immigrant Aid Society met the ship and provided a good meal for the refugees. “They took us out to lunch, and it was a wonderful, wonderful, pleasant day that we had. And then of course we went back to the ship.”

Like thousands of other immigrants coming through Asia, the Loebl family landed at the U.S. Immigration Station on Angel Island. Asian immigrants sometimes languished for many months at the facility. Loebl estimates about 100 Jews from the ship Rakuyo Manu were also being held until someone put up enough money to show that the new refugees weren’t indigent.

Describing Angel Island at the time, Loebl remembers, “They had gates there, wire gates that we felt like we were prisoners. When we went to breakfast, the guard went with us, and we were totally guarded, just like prisoners.”

“My father was separated from us. We just had to wave to him when we saw him. And it was okay, but it wasn’t that pleasant.”

On Sept. 10, 1940, a cousin sent the Loebls a cashier’s check for $200, and the family was released. Loebl said her detention on Angel Island was so traumatic, “for years and years, I could not go back.” 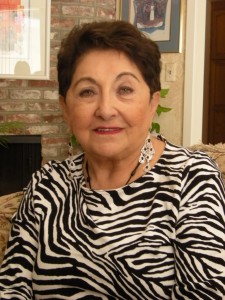 Finally in 2008, a friend arranged for Loebl to visit what is now a National Historic Landmark with some of the immigration buildings restored. “I was very reluctant to go because I didn’t want to remember everything. It was quite difficult to see all these things again. But, you know, I made it.”At the request of the Hebrew Immigrant Aid Society, the Loebl family stayed with a Jewish widow who ran a boarding house. The four family members slept in one room for several months until they could find an apartment. “It was not an easy time,” says Loebl. “But thank God my father started working in the Presidio.”

Ludwig Loebl used his tailoring skills to get a job pressing uniforms for the Army. Lotte’s mother Amalia cleaned houses for a time. Her sister eventually found work in a shipyard. Lotte attended high school in San Francisco.

“None of us could speak a word of English, and so it was difficult.”

By 1942 her parents opened a dry cleaning store and then went into the clothing business, opening a shop on Golden Gate and Fillmore streets. Eventually the family could afford to buy a house in the Sunset district for $11,000.

Her parents “worked very, very hard,” says Loebl. “They worked until 10 o’clock at night in that store, and I was able to cook and bring them food. I walked with pots and pans in a bag, because we lived not too far from the store.”

The family attended an orthodox Jewish temple on Turk and Webster streets. “My parents were quite religious. And I was brought up religious, but you know, after time you let things slide, and I’m not religious anymore.”

Lotte went to Heald’s Business School and later worked at a clothing store in the credit department. She met Alan Frank on a blind date and after only two dates, “he asked me to marry him.” The Franks had three children and operated a grocery store. Alan passed away in 1997.

Like many Holocaust survivors, Lotte didn’t talk much about her war-time experiences. In 2006 she and her sister visited Vienna and other parts of Austria where her family had lived. Her father’s home and factory were no longer there.

“It broke my heart the way everything was. But I was very fortunate to have my parents for a long time. My father was 96 and my mother was 92, and they passed away. And we were very lucky to be a happy family.”

Loebl says it was tough going back. “I don’t think my children even knew what was going on. I couldn’t discuss it with them.”

But Lotte Loebl Frank broke her silence for this story in hopes that future generations will remember.

“I hope that people realize what the Holocaust did to us, to all the Jews, and we didn’t deserve it. And it was just a horrible, horrible thing. And I think people should know about it.” 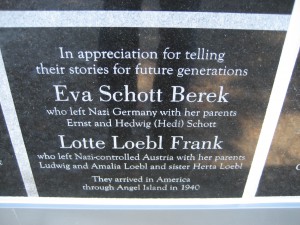 Freelance journalist Reese Erlich has written about the Holocaust and Jewish issues for AARP’s Viva magazine and the Christian Science Monitor, among others. book is Inside Syria: The Backstory of Their Civil War and What the World Can Expect, Prometheus  Books, 2014. For more information, see www.reeseerlich.com

This article was based on an interview conducted by Eddie Wong for AIISF on Aug. 10, 2010. We wish to express our deep appreciation to Mrs. Lotte Loebl Frank for sharing her story and photographs with us.

From Vienna to Angel Island