From Baghdad to San Francisco: The Story of Ms. Mustafa

I interviewed my friend Ms. Mustafa on a beautiful day at the community college where I first met her back in 2009. We were both taking an introductory algebra class at the time, and while working together we became good friends. Every time I would see Ms. Mustafa, she would always have a smile on her face, she would give me a hug, and call me either “habibti” or “baby.” I felt she would be the perfect person to interview for this project.

It was September 19, 1998 when Ms. Mustafa left her home in Baghdad, Iraq stating, “Security was very, very bad.” Iraq had been in turmoil ever since Saddam Hussein claimed himself as president, chief of the army, and leader of the Baathist Party back in 1979 (Brigham 2014, 5). Hussei 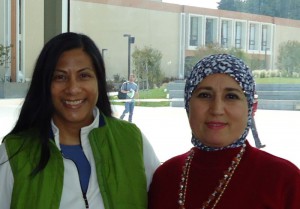 n was a ruthless dictator, invading countries and “committing human rights violations on his own people” (Brigham 2014, 5). Interested in Iraqi oil and hoping to reduce dependence on Russian weapons, the United States extended agricultural credits exceeding one billion dollars, provided high-level intelligence information of Iran’s military movements in Baghdad, and looked the other way regarding Hussein’s human rights abuses (Brigham 2014, 5).

In 1998 President, George H.W. Bush provided additional incentives to help rebuild the Iraqi government, but stipulated that there were to be no chemical and/or biological weapons, and the human rights violations happening within Iraq will not be ignored (Brigham 2014, 8). Hussein continued his terror and invaded Kuwait on August 2, 1990. Operation Desert Shield was the buildup of troops, and Operation Desert Storm was the air, naval, and ground offensive against Iraq, which began the Gulf war on January 16, 1991 (Brigham 2014, 20). Mounting evidence that Hussein was not complying with the “no biological and nuclear weapons program,” and his continued human rights abuses, led to another attack on Iraq on December 16, 1998 (Brigham 2014, 52).

According to the United Nations High Commissioner for Refugees (UNHCR) 1998 Statistics Overview report, there were approximately 590,000 Iraqi refugees. The countries to which these refugees ended up going were France, Greece, Iran, Kuwait, Lebanon, Pakistan, Saudi Arabia, Sweden, Syria, and Jordan. Of the 590,000 Iraqi refugees, a total of 676 arrived in Jordan (UNHCR 2015). Ms. Mustafa says that she did not feel safe and that things were so bad in her country that she needed to leave. She ended up going to Jordan and lived there for ten years. Ms. Mustafa was not able to become a citizen of Jordan, because she had left home without proper documents, as did many other Iraqis (Sassoon 2009, 36). After the 9/11 attacks on American soil, President George W. Bush linked the attacks to Iraq, and with the United Nations support, began military operations by bombing potential residences of Hussein (Brigham 2014, 93-118).

In 2003, Ms. Mustafa was feeling that security in Jordan was bad and was told she should apply as a refugee to the UN in hopes that they will accept her application. Her application would be sent to the IOM (International Organization for Migration) with the possibility that she would come to America. Immigrant America says “the resettlement locations of refugees and asylum seekers’ are decided by government authorities and private resettlement agencies” (Portes and Rumbaut 2014, 84-85). She was accepted by the IOM, and on December 3, 2008 came to San Francisco. According to the U.S. Department of State’s Refugee Processing Center website, there was a total of 14,260 Iraqi refugee accepted into United States. Of the 14,260 there were 2,986 coming into California, the highest number with Michigan coming in second at 2,605 refugees (U.S. Department of State Website 2015). When Ms. Mustafa found out she was coming to America she said that she was so happy that she began to jump in the streets. But when she had put her stuff down she began to cry. She said, “What am I going to do in this country? I have no language. There is a lot of people. I have no money. Where I go? What am I going to do?” Ms. Mustafa began to feel scared, but she knew that “the security was okay, the people will be okay with me. They will help me.” She said the transition from Iraq to Jordan was easy because the culture and language is the same. But going from culturally similar (Jordan) to America was hard and scary, so she cried all the time.

When Ms. Mustafa arrived in San Francisco, she spent three weeks with a Palestinian family. They were American born but can speak both Arabic and English. Ms. Mustafa said that although they were Christian, they treated her very well. The Palestinian family helped Ms. Mustafa find another family to live with that also spoke Arabic, and she lived with them for six months. She earned money by taking care of the family. The family helped her by bringing her out to the city and helping her become familiar with her surroundings. After six months, she was able to find a room to rent in the San Francisco Bay Area using the money she earned taking care of the family, and also some extra funds the family offered her.

Ms. Mustafa lives in a small room with a bathroom and small kitchen. She says that it is okay for her. January of 2009 Ms. Mustafa registered at an adult school to learn to speak English. As soon as she received her green card she went to Skyline College. She said that she really studied hard to learn to speak English, she learned about culture, and how each person has a different culture. She continues to go to school.

Ms. Mustafa not only spends the majority of her time studying, but she works as well. Her first job was at Skyline College’s Cosmetology department where she helped clean after classes. She moved on to the photographic lab and would clean up after the students leave. Since being in America she learned how to drive and with the money she has earned she was able to buy her own car. She is currently working as a home support provider wherein a client will call her if they need to go out to do some shopping or buy medicine. Sometimes they call because they need to have their house cleaned, or just someone to talk to or take them to a coffee shop or restaurant to eat something. The clients are elderly who spend most of their time alone.  She is happy because she feels safe.

Since coming here to America Ms. Mustafa has never felt discriminated against.  She has been able to maintain her culture by practicing her religion at home or sometimes she goes to the mosque with her friends, but because she is busy studying, she practices mostly at home.

When asked if she feels that she is Americanized she says that she is, but only half Americanized. She explains by saying when she is home or with friends speaking her language, practicing her religion, talking to her family back home she feels 100% Arabic, but when she is in school or helping her elder clients, she feels 100% American. She does realize that most people do not see her as American because she wears a headscarf.

Although all her family, her mother, three brothers, two sisters, and their families are all back home in Iraq, she has no desire to go back home. She feels safe here in America.

From Baghdad to San Francisco: The Story of Ms. Mustafa