It was really a feeling of wow, this is America! It’s so beautiful with flowers everywhere. Then the shock of that room… -Chie Takeshita

Chie Takeshita was born in Oakland, California, on October 27, 1911 to Reisaka and Hiro Yazaki. She was the oldest of three girls and one boy in the family. She stayed in Oakland until she was five while her parents ran a laundry there. In 1916, she moved with her family to Japan because her mom wanted her to get a Japanese education. Her parents owned a lumberyard there, and she remembers growing up in comfort. Times were bad when some of the customers weren’t paying for their services, but she never felt poor.

Then, in the early 1930’s, her mother became seriously ill, and Chie had to stay home to take care of her as well as all the housework. Her father couldn’t manage the lumber mill or really do much, presumably out of grief. As the oldest, Chie said, “I did it all.”

Chie and Eiko at their wedding

This all changed in 1936. The previous year Eiko Takeshita, whose parents were farmers, lost his first wife to illness. He looked to remarry, and the matchmaker suggested Chie to be his wife. They knew each other because one of his first wife’s parents was the cousin of one of Chie’s parents. Eiko wanted a wife with American citizenship, so that immigrating to the United States wouldn’t be a hassle. He was not a U.S. citizen and had come to the US before when he was eighteen. He was from a farming family and she was from the city, but their status was relatively equal because his family owned land. They were married on January 18, 1936, in an elaborate traditional ceremony. Then they decided to head to America. For Chie, it was because she wanted a new life, away from the land where her mother had passed away.

As she embarked on the journey, all her relatives in Japan came to say goodbye. She was not sad or scared about leaving, however, because she had her husband with her. Chie and Eiko came to America on the Asama Maru, and by that time Chie was pregnant and experiencing morning sickness on the boat. The ride was fairly comfortable, however, as she was traveling in second-class. Upon arrival in San Francisco, Chie was told to pretend to be unmarried, as immigration laws then stripped the U.S. citizenship of any woman who married “an alien ineligible to citizenship.” Her husband Eiko was able to disembark at the port, as he already had a job and sponsors waiting for him in San Francisco. However, Chie had to continue on to Angel Island for immigration inspection.

She didn’t expect to go to Angel Island, on a boat full of strangers. The natural beauty of the island did give her some hope, however, at least until she reached the detention facility. According to her daughter Susan, “She said when she first got off at the island, she thought, what a beautiful place this was. This must be America. Then she was taken to this building that was really, really dark, and it was kind of scary.” That room was the dormitory in which she and other Japanese women stayed. They slept in cramped bunk beds, and that night, she could not sleep well at all.

The next day, her brother Yukio, who was already in the U.S., came to the island to testify on her behalf. He brought a picture of himself and Chie as young children, and Chie had her birth certificate and family pictures in her suitcase as well. Because she had to lie about her marital status, she also had to lie about her intended destination. She claimed she planned to stay with the proprietor of the Golden Gate Park Japanese Tea Garden–her uncle and their family, the Hagiwaras, when in reality she would be living with her husband. She was admitted into the country on March 28, 1936, although she remembers staying on Angel Island for only one night. 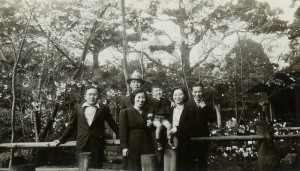 Family Members at the Japanese Tea Garden in San Francisco

After reuniting with her husband Eiko, Chie lived in San Francisco, at their apartment on Buchanan between Bush and Sutter. Eiko owned a laundry on Stanyan Street and also had a dry cleaners/laundry on Sacramento Street before World War II. Chie started working in the laundry, and soon had her first son Akira on November 12, 1936, and a second son Aichi in 1940. She liked living in America immediately, finding the people kind and life easy. She didn’t mind sewing and making alterations for the laundry. 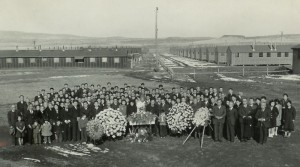 But after Japan attacked Pearl Harbor in 1941, Chie’s life working completely changed. She and her family were sent to the camp at Topaz, and then Tule Lake. She remembers it was a very unhappy time, and she never talked much about her experience to her children. There was one incident that stood out for her. In the barracks, there was an open coal pit for the potbelly stove. One day, a child around ten years old fell into the pit. He survived, albeit with massive burns, because the people in the camp donated blood for him. The very next day, Chie’s son Aichi fell into the pit. There was not enough blood, and he was too young to survive his injuries. He was only three years old.

Chie and daughter Suzy at the Divisadero laundry

The family returned to San Francisco after the war. They stayed at a Buddhist church, then moved to live with an Italian family, the Bianchi family. Eiko did the cooking and Chie did the cleaning. Amazingly, six months later, Eiko was able to buy a dry cleaners/laundry on Divisadero Street after losing all of his previous laundries after the war broke out. They had their daughter Susan when Chie was already 40 years old, in 1950. They worked at that laundry until 1968, when they both retired.

Ten years later, the second great tragedy in Chie’s life occurred. In the morning of November 27, 1978, while both Chie and Eiko were asleep, they heard their doorbell ringing. Eiko got up and opened the door, finding two armed teenagers, aged 13 and 16, at his door. They were from the neighborhood, and they intended to rob the Takeshitas. Eiko slammed the door in their faces, but one of the boys fired three shots through the door and killed Eiko. Chie lived for three more decades, passing away at the age of 98 on March 23, 2010.

This story is based on an interview with Chie Yazaki Takeshita by Judy Yung and Eddie Fung in 2006, with translation and editing by Mrs. Takeshita’s daughter Susan Tanaka. Special thanks to all of them for their time and memories, and to Susan for use of her photographs.

Lawrence Li wrote this story during his Yale student externship with AIISF.