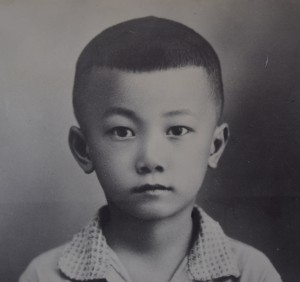 Herbert Yee was born in 1924 in Toishan, Guangdong Province, China. His father, Henry Yee, a 1921 civil engineering graduate of the University of Michigan, became the railroad building chief in China. The family went to live in Kee Sui District, Sing Tong Village, where his grandfather Lun Wo Yee lived and ran a grocery store. Herbert’s father married Hom Wai Yee in 1915 through an arranged marriage broker. Hom Wai Yee was a student in the neighboring village. The school and store faced a tall mountain where grandfather is buried. In front of this mountain where the previous school and store stood, Herbert (then age 57) raised money in 1981 to build a larger school (elementary to high school). The old house still stands consisting of a large room, a smaller storeroom, a kitchen and a loft area where the family slept and a courtyard.

Herbert’s father, who had worked for the Michigan Road Department while earning his master’s degree, returned to the US in 1929 to become an herbalist and chiropractor. He was able to raise enough money to send his son Paul, age 15, back to China in 1931 to fetch Henry’s wife and sons Herbert and Calvin, leaving daughters May and Song in the care of an aunt. Herbert remembers his dad having to save $400 for passage on the President Cleveland putting them in a second class dormitory in the hold of the ship. The journey took three weeks with a stop in Honolulu, Hawaii. They were not allowed to get off the ship in San Francisco with the rest of the passengers. They were sent to Angel Island for a week of interrogation. Paul was able to get off the ship and return home with his father who was living in Sacramento. Herbert was six and a half years old and Calvin was just one year old. He was able to stay with his mother and Calvin in the women’s section because they were so young. They had the second bunk bed next to the wall. He remembers Calvin rolling down the hill when they let detainees out for a brief time in the fenced yard. They were asked questions by two white persons and one Chinese interpreter. He was given a penny by them and was told it was a gold coin. His mother, Hom Wai Yee, was very modest and didn’t want her clothes taken off for physical examination, a Western custom not common in China. 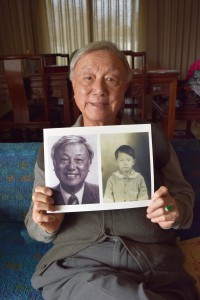 When the family was finally released, they had lunch with Henry in San Francisco’s Chinatown before taking a ferry to Oakland and then a train to Sacramento. They lived at 707 ½ J Street where Henry had an office upstairs and rented out part of downstairs as a campaign office. There was a kitchen, bathroom and two rooms for bedroom and living room. This was during the Depression and money was scarce (ten cents for two bottles of milk). He remembers banks closing, people in food lines and getting an ice cream cone at Woolworth’s was a special treat. In 1933 his father was able to save up to bring his two daughters to Sacramento (Song and May). Unfortunately, sister Phyllis died of spinal meningitis at age three. Franklin and Carol were born in Sacramento. Henry Yee opened a second herbal office in Grass Valley.

Herbert attended Washington Elementary school and Lincoln School where he excelled in speech. Herbert started a marble business in elementary school. At that time, if you won, you got to keep the other person’s marble. Herbert’s friends won lots of marbles for him. Billy Fuller was his sidekick. In 1940 he attended Sacramento High School. He was on the wrestling team, and was good at math and German. He ran for student body president but lost to a friend.

Herbert applied to Stanford since his dad went there (before going to Michigan). World War II came along. At age 18, Herbert went to Monterey to sign up for the draft. Since the armed forces needed doctors, he could get a medical deferment if he qualified. He was accepted into the College of Physicians and Surgeons (then part of Stanford and now part of the University of the Pacific) as a dental student. During the time he was in dental school, he went to chiropractic school in the evening. He declined a position teaching basic science while there. Herbert was a first class private when he graduated in 1948 but the war was over by then. 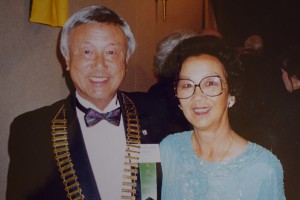 Herbert met his wife Inez while going to Stanford, and they married in 1945. Henry, his father, helped form the Chinese Student alumni club when he attended Stanford. Herbert asked Inez to become a member. Inez came from the town of Niles, now part of Fremont, and Herbert would drive there to get gas and fresh vegetables which weren’t rationed to farmers. When his mother met Inez, she immediately went out to buy her a ring. Herbert and Inez had two wedding banquets and spent their honeymoon in Carmel at the La Playa Hotel. Herbert and Inez had four sons who went into the medical/dental fields (Randy, Doug, Alan and Wes), four daughters-in-law (Elaine, Karun, Helen and Nancy), and nine grandchildren and currently, twelve great- grandchildren.

Herbert K. Yee is a man for all seasons. He has bridged the gap between Chinese and American leaders and has a special passion to be active in community service organizations. His positions have included President of the International College of Dentists, President of the California State Board of Dental Examiners, Grand President of the Yee Family Association, board member of the California State Railroad Museum Foundation for over thirty years, and other involvement listed below, including raising funds for the school described in the first paragraph.

A partial list of his accomplishments follows.
President of the Alumni Association University of the Pacific, School of Dentistry (1970-71)

Karun Yee is an active volunteer in Sacramento and a daughter-in-law of Dr. Herbert Yee. Thank you to the Yee family for their photographs and stories.

In January of 2015, Dr. Herbert Yee sat down with Grant Din of AIISF and talked about his Angel Island experience, at the age of six-and-a-half. Please click on the link below to see this seven minute video.