The story of the Nakamura brothers of Japan and Reedley, California, is an example of the challenges many Japanese immigrants faced in the U.S. After many challenges, they were both able to establish farming businesses and raise families, only to find their worlds torn apart shortly after Pearl Harbor when both were arrested and sent to a temporary detention center called Sharp Park, near Pacifica, CA. Older brother Mantsuchi was then sent to Fort McDowell at Angel Island and then to Lordsburg and Santa Fe, New Mexico before finally being reunited with his family at Poston, Arizona, while younger brother Sojuro was reunited with his family earlier at Poston, avoiding the U.S. Army and Department of Justice camps where Mantsuchi was sent. For more information on the use of Angel Island to house Japanese detainees, visit our website here (scroll about 80% of the way down the page). 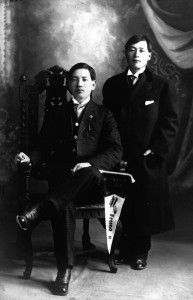 Mantsuchi Nakamura was born on February 27, 1877 in Hiroamachi, a small village in Yamaguchi-Ken on the isolated Yanai Peninsula of western Honshu, during the time of the Meiji emperor.  He was the eldest of seven children. His granddaughter-in-law, Katherine Peters Yamada, notes that many of the people in this region were quite poor in the late 1800s. Despite its isolated location, 420 men from Yamaguchi-ken responded to contractors from the Hawaiian government who were recruiting Japanese laborers for the rapidly expanding sugar industry.

Ineligible for the draft because he was too short, Mantsuchi went to Hawaii sometime around 1900, during a period of free immigration. He was one of about 68,300 Japanese who left Japan for Hawaii. After working on pineapple plantations on Oahu, he went on to California in 1902, according to documents from his family. More than 35,000 Japanese immigrants made this journey to the mainland. Mantsuchi worked in Los Angeles laying railroad, then went to the Reedley area, near Fresno. Mantsuchi’s brother Sojuro, born in 1882, arrived in the U.S. a year later.

The brothers worked on farms and nurseries and in 1906 joined forces with Hichigoro Okamura to buy a grape farm and later purchased separate properties. This was before California’s Alien Land Law forbade Japanese immigrants from buying land. Mantsuchi traveled to Japan to marry Fuji Yamada in 1913, and his brother married Shizu Nitta the next year. Most likely both couples were processed at Angel Island upon their return/arrival in San Francisco. Both families grew – Mantsuchi and Fuji had eight children and Sojuro and Shizu had ten!

According to Yamada, both brothers believed that eventually they would make enough money so they could go to Japan and live there with their families. Raisins were bringing in a very good price and in October 1921, Mantsuchi took two of his children, Sojuro’s oldest children, and their friend and business partner Hichigoro Okamura’s children to Japan. The children stayed with grandparents and Mantsuchi returned to the U.S. in February of the next year to tend to his business. Later, Fuji journeyed to Japan, bringing the rest of the children to Japan.

The Nakamura brothers were involved in building a Japanese community hall in Reedley and the Buddhist Church.  Mantsuchi and Fuji also became known as baishakunin (matchmakers), arranging fifty marriages!

By 1930, prices for raisins were very low and it became more difficult to send money to Japan. The brothers had Fuji bring the children back from Japan, and they all went through processing on Angel Island, even the American-born children. Because Fuji had overstayed her travel visa, she said she was sick to explain the length of her stay. Questions about this from the immigration officials resulted in a stay of a month for her and her youngest until they were finally released.

Pearl Harbor Day changed the lives of the Nakamura families forever, as it did for many Japanese American families. As Yamada notes from an oral history of Masao Okamura, Hichigoro’s son, “Mantsuchi and Sojuro Nakamura and his dad, Hichigoro Okamura, were arrested by war authorities in connection with a Kendo (a form of martial arts) Club they had started. Dad was in Kyogi-Kai, a Japanese society.” The authorities had come across a booklet which included their names as being responsible for forming the Kendo Club. Misturu Toyama, a top military consultant in Japan, was listed as a sponsor.

According to Tetsuden Kashima’s Judgment without Trial, the FBI had kept surveillance of many Japanese immigrants for years before the Japanese bombed Pearl Harbor. The people watched included Buddhist, Shinto and Konkokyo ministers, community leaders, journalists, and people with affiliations with organizations in Japan. This was despite government investigators who found that there was no reason to suspect Japanese immigrants and their children of any actions against the U.S., and there were no incidents of sabotage among Japanese immigrants or their children against the U.S. during the war.

Masao Okamura noted that the detained men were taken suddenly, “right from the field.” Sojuro’s family said that everyone was sent out of their house and the police went through and searched it. Yamada notes, “They didn’t find anything, but they took him off to jail and later to Sharp Park in San Francisco. ‘Somehow we knew where he was,’ said the children.” Masao noted that his father returned a few days later to pick up some belongings, with an FBI agent following his every move. “We’d already burned all our records and maps in a bonfire, but it didn’t do any good, they took my Dad away.”

The Nakamuras and Okamura were arrested on March 26, 1942 in Reedley and spent some time in custody in San Francisco. By March 31 all were held at Sharp Park Camp, near Pacifica, south of San Francisco. On August 6, Mantsuchi was transferred to Fort McDowell (Angel Island), “jurisdiction assumed by army at Sharp Park Camp, for internment at: Ft. McDowell, Calif.” On August 16, Sojuro was allowed to join his family at the Colorado River War Relocation site in Arizona (Poston). Hichigoro Okamura had been transferred the day before. The order of the US Attorney General of July 28, 1942 declared that Mantsuchi has “heretofore been apprehended as being potentially dangerous to the public peace and safety of the United States” and “IT IS ORDERED that said alien enemy be interned.” Sojuro had received similar orders in March, but they were modified in August. Son Shigeyuki had written a letter from U.S. Army Camp Savage in Minnesota on June 30, requesting Sojuro’s release. 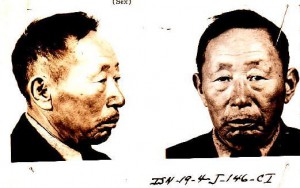 A look at the records shows that Mantsuchi’s son Charles filed a petition three times in June of 1942 for Mantsuchi’s release. In July, the Immigration and Naturalization Service District Director asked that because of the advanced age of the subject, the case should be expedited. This had no impact, as Mantsuchi (pictured here) was sent to Angel Island for internment on August 6 and remained there until the 27th, in the P.W. (Prisoner of War) facility, according to records in the National Archives and Records Administration College Park facility. Then he was sent to the Lordsburg Internment Camp in New Mexico. The family filed a petition of its own on November 24, but on June 14, 1943, he was released to the custody of the I&NS (Immigration and Naturalization Service) in Santa Fe, NM. Son Charles, in the military, wrote to request a rehearing again in 1943, Mantsuchi requested a rehearing several times in 1943, and finally is listed on a Final Accountability Roster as reuniting with his family on November 24, 1943 at the Poston Camp. By then, several of his children were either serving in the military or had married and had left the family to go to school or work in St. Paul, MN, Cleveland, Ohio, or Colorado Springs, Colorado. By early 1944, Mantsuchi and Fuji were the only family members left in the camp, and they were finally released in June of 1945 to return home to Reedley. Mantsuchi was 68 years old when he went home.

Why was Sojuro allowed to join his family so quickly and Mantsuchi not? Unfortunately, one important file for Mantsuchi that could provide more detail was unavailable in the National Archives, but since the brothers were involved in many of the same activities, it is worthwhile to see what was in Sojuro’s FBI file (spelled “Sozuro” in many of the records). Sojuro’s file has a summary that includes: “Subject is member or supporter of HOKUBEI BUTOKU KAI (Military Virtue Society of North America). Records of this organization reflect its purpose to be the dissemination of Japanese national spirit through the world and to direct Japanese expansion overseas. Heads of organization are high Japanese government officials, including MITSURU TOYAMA, reputed head of the Black Dragon Society.”

Later in the document, government official W.J. McCormick notes, “This group is ostensibly interested in Kendo, Japanese fencing. However, in connection with Kendo, the leaders attempt to inculcate into the members the ideals of military honor and the spirit of the Japanese warriors.” At the time of arrest, Mantsuchi was 65 years old and Sojuro was 59. Sojuro’s file also shows that his kendo club went to Japan – the investigators had photographs. Investigators also noted that Sojuro was a member of the Japanese American Association of Reedley and had made contributions to a number of organizations including the Japanese Red Cross of Yamaguchi-ken and a Japanese language school. Hardly subversive activities!

Sojuro’s record shows that his son in the army (Shigeyuki Howard) had also filed a petition to have his father released. Howard was undergoing language training in the Military Intelligence Service at Camp Savage, Minnesota, which was later credited by a U.S. general as shortening World War II by two years. 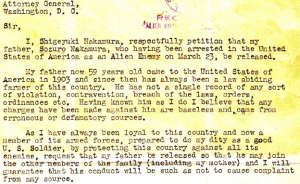 Sojuro Nakamura also received letters of support from colleagues and neighbors including J.J. Eymann, Chester Parlier, R.H. Rasmussen of the Bank of America and J.E. Segrue, who knew him in Reedley. No doubt Mantsuchi also received similar letters. Eymann wrote,

Despite all this, Sojuro’s file also says that “the most he would say when questioned as to his loyalty to the United States in this crisis was that he wanted peace as soon as possible. He proved to be a shrewd and evasive witness and the members of the Board unanimously recommend his permanent internment as a potentially dangerous alien enemy.”

Fortunately for Sojuro, however, another hearing board noted the following on July 31, 1942 and he was finally reunited with his family in the Poston, Arizona camp soon after, a year before Mantsuchi joined his family there. Sadly, only two years later, Sojuro’s wife Shizu passed away in camp. Yamada notes that she “had always had a delicate constitution [and] could not tolerate the camp food and became ill.”

Sojuro and his family members were released from Poston to Reedley on April 27, 1945 on parole, and finally released from parole on November 1, 1945. Mantsuchi and his remaining family members returned to Reedley on June 29, 1945 and his Alien Enemy proceedings were terminated on November 15, 1945. Sojuro’s family members worked for other farmers and Sojuro did a lot of the cooking and tended a vegetable garden. In 1953 Sojuro was among an early group of Issei who took citizenship classes taught by his son Howard, after the McCarran-Walter Act of 1952 finally allowed Japanese immigrants to naturalize. He was sworn in as a U.S. Citizen in 1954. 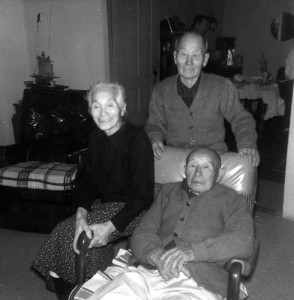 Special thanks to Katherine Peters Yamada, granddaughter-in-law of Sojuro and Shizu, for her wonderful and very detailed story of Sojuro’s life and for the family photographs; and to the Japanese American Confinement Sites project of the National Park Service for partial funding for AIISF’s research on the use of Angel Island as a temporary detention center during World War II.

Thanks to Adriana Marroquin for researching the Nakamura files in the National Archives and Records Administration center in College Park, MD and to NARA staff in San Bruno, CA.

Grant Din wrote this profile when he was the Community Resources Director at the Angel Island Immigration Station Foundation. Research for this series on Japanese American detainees on Angel Island during World War II is partially supported by a grant from the Japanese American Confinement Sites (JACS) program of the National Park Service.