Japanese immigrants were arrested by the FBI on both the mainland U.S. and the islands of the Territory of Hawaii on December 7, 1941 and in the following months. By law they were “enemy aliens” and could be taken away as internees. As mentioned elsewhere on our site, Asians could not become U.S. citizens, by law. One of these immigrants was Yasutaro Soga, editor of a Japanese language newspaper in Honolulu. He and several hundred other prominent Issei (Japanese immigrants) were arrested on the evening of the attack on Pearl Harbor and sent to Sand Island, near Honolulu, for six months, then sent to the mainland. Angel Island was his and his 48 shipmates’ first stop on the mainland; it was run by the US Army as a temporary detention center. See our introduction to this section for further details (scroll about 80% of the way down the page). 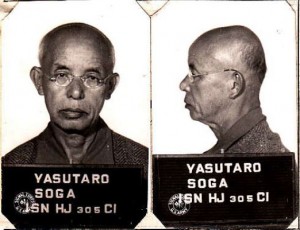 Fortunately for historians, Soga took extensive notes about his experiences and in 1946 published Tessaku Seikatsu (Life Behind Barbed Wire) in his native Japanese. It was later translated by Kihei Hirai and published by the University of Hawai`i Press in 2008.

According to the Densho Encyclopedia, Soga was born in 1873 and raised in Tokyo. He arrived in Hawai’i in 1896 and after working at his friend’s store for two years, went on to manage branches of the store elsewhere in the islands. In 1899, he moved to Honolulu and began his career as a journalist, taking over the Yamato Shimbun newspaper in 1905 and renaming it the Nippu Jiji in November 1906. He became a recognized leader of the Japanese Hawaiian community, playing a large part in issues such as citizenship for Issei and relations between Japan and the U.S.

Soga, then age 68, described his arrest the night of December 7, 1941 and his initial incarceration at the Immigration Office in Honolulu, then the Sand Island Detention Camp off Honolulu. After about a month in captivity, he was questioned by an inquiry commission at the Immigration Office. According to his file in the National Archives and Records Administration in College Park, MD, Soga was questioned by a group of commissioners. He was asked about his feelings of loyalty – were they to Japan or the U.S., where he had lived for over 45 years. “I am living here two-thirds of my life. And my whole family, it is small, and my property is here, being that this is the land of my bread, so if anything, I am for America. I think anybody who knows me can testify to that, you know.”

Soga’s group was the fifth sent to the mainland from Hawai’i. His ship, the SS Matsonia, left Honolulu on August 7, 1942. The first seven groups all spent time on Angel Island, and the last three went to Sharp Park near Pacifica, just south of San Francisco. The ten groups totaled 1,693 men and 8 women; after that, residents of Hawai’i were kept at Honouliuli Detention Camp in Ewa, Oahu.

Soga’s journey took eight days, and he arrived in San Francisco Bay on August 15, 1942. “We were quickly transferred to a barge and then taken to Angel Island under heavy guard. I had not seen San Francisco in more than twenty years and had never been to Angel Island. The body and baggage checks were strict but businesslike. A young military doctor ordered us to strip. My usual weight, including clothes and shoes, was 135 pounds, so I was surprised to learn that I was now only 113 pounds.

“Living quarters for all forty-nine of us were two rooms measuring about thirty-six feet by seventy feet on the second floor of an old building that had once been the Immigration Bureau office. Because there were about ninety internees from California already housed there, space was very tight. The beds were trilevel bunks with barely enough walking space in the aisles. There were about ten windows and one ventilator, but with 140 occupants, air circulation was poor. That night I had difficulty breathing and had a headache. The place reminded me of the Honolulu Immigration Office soon after my arrest…The meals were good, but the living quarters were very unsanitary (Soga, 68).”

Soga also mentioned that about twenty-five Germans and Italians were being held on the island. He described the writings he saw on the walls – Chinese and Japanese writing. “Graffiti covered the walls of our rooms. From the messages written, I knew Japanese POWs had been here, too. ‘Father said to die bravely in battle. Mother did not say to be a POW, but here I am now….’ ‘For the whole world under one roof, I go to sea under a blue sky.’”

Soga mentioned the other internees he met, many from the mainland. Some of their stories follow in this section.

After twelve days on Angel Island, Soga and the entire group of 140 Hawai’ian and mainland Japanese left for Oakland, and then boarded a train for the Lordsburg Camp in New Mexico. Before he left, he added his own graffito mark in a corner of the room where he had stayed. His time in captivity had not been pleasant and he wrote, “So we are Japs. Let us stomp defiant over sea and mountain.”

Soga was next sent to Lordsburg Camp in New Mexico, then to Santa Fe Camp, also in New Mexico, then finally was released on October 30, 1945, headed back to Hawai`i via Seattle, and rejoined his family in Honolulu on November 13, 1945. He resumed his journalism career with the Hawaii Times (the new name taken on by the Nippu Jiji during the war), became a naturalized citizen in 1952, and passed away in 1957 at the age of 83.

Special thanks to researcher Adriana Marroquin for scanning and summarizing the NARA files for Mr. Soga.

Grant Din wrote this profile when he was the community relations director of the Angel Island Immigration Station Foundation. Research for this series on Japanese American detainees on Angel Island during World War II is partially supported by a grant from the Japanese American Confinement Sites (JACS) program of the National Park Service.