She roared wherever she went; the story of Moy Lee, entrepreneur and liberated woman

I began this journey after hearing these fascinating stories of Moy at her funeral; I wanted to know how someone who dared to come to America at 21 during the Exclusion Act and anti-Chinese sentiments could find success and also become a multimillionaire (a woman, no less). I wanted to see how her struggles turned to ambition could help me and future generations. 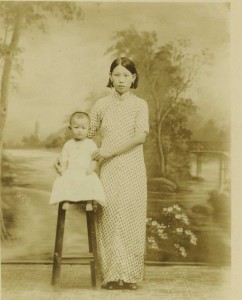 My grandmother’s name at birth was Ming Q. Wong, later known as Ngun Moy Hum. She was born in 1916 in Kongmoon (Jiangmen), a city in Guangdong province in southern China. When she was only 17, she married Wae Yin Tom, who was thirty years older than she was and became his second wife. During this period in China, it was still common for men to have more than one wife. At the age of 18, she gave birth to a daughter named Hong, my mother. Wae Yin went back to America, and in 1937, he made plans to bring Hong to America. 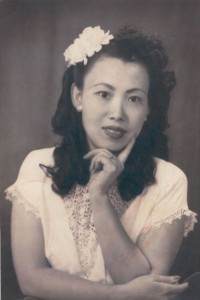 In order for her to come to America, Moy had to take the paper name of Ngun Moy Hum. The immigration law of 1924 prevented people who had legally entered the U.S. from bringing their spouses “ineligible for citizenship” (as all Asians were) to the country and so she had to enter as a student and “paper daughter” of a native. Most likely, her husband bought papers from the Tom (aka Hum) family association which established this status. Moy had to memorize information to establish a whole new identity for herself, and answer questions upon arrival to confirm this identity.

Moy’s immigration records from the Seattle immigration facility documented that she had $8.00 in her possession. She arrived Sept 15, 1937 and was detained at the facility in Seattle, which served the same function as Angel Island in San Francisco Bay. According to her ship’s manifest, she was on her way to join her “father” at 666 King Street, Seattle Washington. Her documents indicate she was released on October 25, 1937, a stay of forty days. 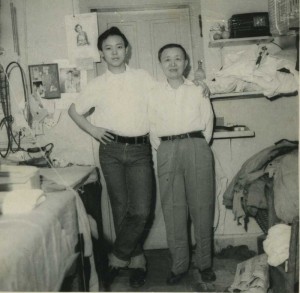 In 1952, Moy took her girls and left Wae Yin, leaving their only son Yow Choy with his father (she was not allowed to take the boy). Moy survived by making a living driving a taxi to and from the Brooklyn Navy yard and making bottles of alcoholic beverages at her home to make ends meet (and was arrested for doing so), while living in an abandoned building in Brooklyn. Moy divorced Wae Yin in 1953.

Meanwhile, her daughter Hong survived the Japanese invasion and wartime China and was finally able to come to America at the age of 21 in 1955. She was shocked to find that her parents were no longer married and not being able to communicate with her American siblings, she felt rejected and alone and opted not to choose which parent to live with, and so decided to get married. She and her husband Jin Sang Chin (also a paper son) had two children, Robert (1956) and me (1957). Because of these choices, my grandmother Moy never had a relationship with my mother, volatile at best. My grandmother wanted more for my mother and wanted to send her to school to get an education; however, my mother felt too old to start over. So they never really had a good relationship.

Moy met Winston Lee, her future husband, in 1953. They married and moved to Kings Highway in Brooklyn and opened a restaurant, “Sunrise.” Moy worked as the hostess and Winston as the cook. This turned out to be a very successful partnership, and from 1952 to 1962 they built an extremely lucrative business together. Moy assimilated into a predominantly Italian and Jewish neighborhood, speaking better English than some Americans. She also took to America’s more “colorful” words, and they became her repertoire. Very rarely did she speak without them! 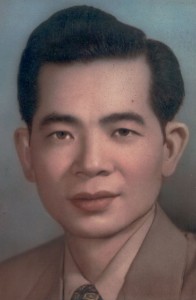 The restaurant’s success enabled Moy to adopt two boys, David and Kenny Lee, in 1959 and eventually moved to Miami Beach, Florida in 1962 where she opened a restaurant called the House of Moy Lee, selling Sunrise Restaurant to her brother See Poy Wong.

During this time their daughter Barbara was breaking into show business and there was a lot of mingling with celebrities, including Liberace, Dustin Hoffman, Johnny Mathis, Jackie Gleason, Milton Berle, Jackie Mason, and many more. The movie Lenny was a 1974 American biographical film about the comedian Lenny Bruce, starring Dustin Hoffman and directed by Bob Fosse. The restaurant scene was filmed at the House of Moy Lee in Miami with Winston Lee making a cameo.

In the 1970s, Moy Lee’s outgoing personality landed her a guest appearance on The Merv Griffin Show when daughter Barbara Tai Sing was a performer in nightclubs, theater and on television.

Moy sold House of Moy Lee in Miami Beach, Florida in 1977 (before it was the well-known South Beach) and moved to Fort Lauderdale. There she opened the Moy Lee Chinese Restaurant in 1975, partnering with ten businessmen to open a restaurant with the capacity to seat 330 people. Vowing never to be a slave to these businessmen, within a year she bought them all out and became the sole owner and multimillionaire before she finally closed in 1988.

The Lees were a target of an extortion attempt in September 1983, according to Moy’s obituary in the Sun-Sentinel newspaper from Fort Lauderdale. “They were held at their home for ten hours by members of a gang based in New York City’s Chinatown and freed after agreeing to give the men $60,000 within a week. The plot failed when two of the men were arrested several days later when they went to collect a bag of money stashed in a car parked in Wilton Manors. Instead of money, the bag was filled with fortune cookies and was under FBI surveillance. The two men and an accomplice were convicted.”

Moy died in 2012 at the age of 96, survived by seven children, fourteen grandchildren, fourteen great-grandchildren, and a brother; her son Harry and husband Winston preceded her in death. She was an entrepreneur, a liberated woman, before it was fashionable. Moy did what men did, she took no nonsense from anyone, she dared to come to America when there were few Asians and even fewer Asian women, and she was afraid of no man, woman or demon. She roared wherever she went, she was heard whether you wanted to hear or not. You knew her point of view whether it was solicited or not, whether you agreed or not. Moy was Moy and there will never be another like her ever again! And I am proud to be her granddaughter.

About the author, Suzanne Eng: “I was born in the Lower East Side of New York City of immigrant parents, who worked in sweatshops and restaurants their whole life barely making ends meet. Residing in New Jersey now, I have been married to Fred Eng for over thirty years. He is also a Chinese American born of immigrant parents. I finished my Masters this year in Labor and Employment studies and wrote my dissertation on the immigration and discrimination of the Chinese during Exclusion all because I discovered Moy Lee’s story. I hope one day to be as brave as Moy and continue her legacy through my four children Nicholas, Aaron, Christiana, and Elisabeth.”

She roared wherever she went; the story of Moy Lee, entrepreneur and liberated woman