The Nikonenkos: Married at Sea on the Way to Angel Island 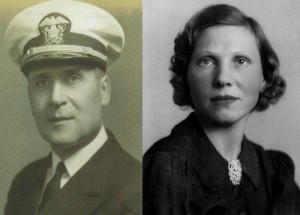 Paul Vasili Nikonenko was born January 27, 1899, and lived in a suburb of Kiev called “White Church.” His father, Vasili, was in charge of a huge estate for an absentee landowner. As a youngster his mother died and he was sent to live with a relative.

During his teens he applied to the Sebastepol Naval Academy and was accepted as a cadet. These were turbulent years and the civil war was in full swing. The Bolsheviks were intent on seizing all of Russia and now they were expanding towards the Crimea. Paul and several of his colleagues decided to quit their area, head for Siberia and thence to Vladivostok. Their route took them through Persia (Iran), Mesopotamia, India, on to Formosa, from where they sailed to Vladivostok. Their destination was the Naval Academy in that city. He befriended a couple of lads at the academy. They invited him to their home and it was there that he met Mary Bataev.

Mary was born in Vladivostok on November 22, 1903 to Vasili and Alexandra Bataev. Vladivostok was a thriving seaport, with a well-known naval academy and a developing far east fishing industry. Her father was connected with the latter. Sadly, one day while out to sea, encountering a huge, unforeseen storm, the boat sank and all was lost. He was survived by a widow, three sons and a daughter.

Mary did manage to receive a formal education, thus graduating from the gymnasium, the Russian equivalent of high school. Mary never talked about or recalled her past. Once the Bolsheviks succeeded in capturing Vladivostok, all non-essential personnel were relocated to other areas of Russia. Alexandra and her three sons ended up in Moscow, but Mary remained in Vladivostok. Due to the severe censorship that was introduced at that time, Mary lost contact with her family.

The red menace was gaining a stronghold in Siberia and now was aiming for Vladivostok. Admiral Uri K. Stark assembled a 17 ship flotilla for the individuals who were looking to escape from that city. Several thousand persons boarded the ships and on October 22, 1922, the flotilla slipped out of the Golden Horn Bay and on to the Sea of Japan. Destination–unknown.

After much wandering, battering heavy storms that sank two of the ships and its passengers, and dealing with inhospitable countries, Adm. Stark received word that the United States would offer these refugees asylum in the Philippines. As noted in our account of the journey of the flotilla, only a small remnant of the 7,000 refugees who started out from Russia made it to that country.

They were encamped close to Manila and the Red Cross offered aid. When the US quotas were lifted, the US offered free transportation to the individuals who wanted to continue their journey to America. In May of 1923, 526 passengers boarded the US Army Transport Merritt, including Paul and Mary.

Romances gave occasional happy touches to the lives of the wanderers. Paul and Mary were married aboard the Merritt, one of the many religious services performed by Father Serge Denisoff.

Because the group was so large, upon arrival in San Francisco Bay on July 1, 1923, those who had sailed on the Merritt were taken to Angel Island, also known as Fort McDowell, to be processed. The army made arrangements for their temporary care – first the women and children, then the men and boys. The group was originally comprised of 324 single men, 70 married men, 27 single women, 50 children and 55 orphans, with the Nikonenkos becoming the first married couple. After they passed their civil and medical tests, they were escorted to San Francisco.

The Russian Relief Society and the Red Cross took over finding temporary housing and opportunities for work. Most were housed in the hotels in the area around Mission and 6th Street. A variety of jobs were offered, work in the forest area, building tracks on Market Street for the new street car program, loading and unloading sugar in Crockett, canning factories, etc. Factory jobs were available to women. In time, the individuals were give permanent housing, in some cases, sharing flats with other individuals. Housing was mostly in the Western Addition area.

Father Sakovich, of the Holy Trinity Church at Green and Van Ness Streets, offered spiritual guidance, solace and support. His church was like a “home away from home” for these displaced persons.

Paul was fortunate to get a job in his field, electronics. He was intent on continuing his education in this area, thus enrolling in the Continuing Education program at UC Berkeley, in hopes of getting a degree in Electronic Engineering. At one time, he worked with Philo Farnsworth, and was exposed to the development of television. He had a small “cottage industry” in his home, repairing anything electronic.

During WW II, he had the opportunity to join the US Navy. His specialty was radar. He spent much time at MIT in Boston and Patuxent Naval Station in Virginia. Following the end of the war, he received an honorable discharge with the rank of Lt. Commander.

During his retirement, he had the opportunity to visit Kiev, to travel to the area where he grew up outside of that city. He was able to connect with the remaining members of his family for an emotional reunion. He had parted with them in 1918. At that time, he was taken to see the Chernobyl Power Plant, or what remained. Several years later, he took a trip on the “Siberian Express,” something he always wanted to do.

Eugenia Bailey is the daughter of Paul and Mary Nikonenko. She was born and raised in San Francisco, graduated from Lowell High School and attended UC Berkeley. She is a historian and world traveler and long time resident of Kensington, CA who organized the 90th year anniversary event organizer in remembrance of the USAT Merritt. She is currently conducting research and preparation for the 100th year anniversary of the USAT Merritt’s arrival.

The Nikonenkos: Married at Sea on the Way to Angel Island